I'm just about to mount my very clean and fresh looking bicycle and pedal down to my friend Trisha's house that lies halfway between home and the port where I'll catch the ferry to France tomorrow evening. Trisha is also expecting her first child today, so perhaps we'll have another addition to the Irish nation by tomorrow morning. I've warned her that my first aid kit probably won't be up to the job, but she's not perturbed. Speaking of babies, I was thinking of baptising the bike Rocinante, as I have a copy of Don Quixote with me. I discovered, however, that this would not be in any way an original idea and that many others have thought of naming their choppers or traveling vehicles (Steinbeck's motorhome in Travels with Charley) with the same name, after Don Quixote's famous steed. Moreover, I feel a little guilty as I haven't read the book yet, so it doesn't have any particular significance for me. In fact, the primary reason that I'm bringing the book is because in my stack of To Read's it was the one that carried the biggest bang for your gramme with close to 1000 pages of size 5 font script. Although some say it's the best novel ever written and that it marks a crucial phase in the evolution of modern literature, so that's another good reason. Anyhow, time to go. 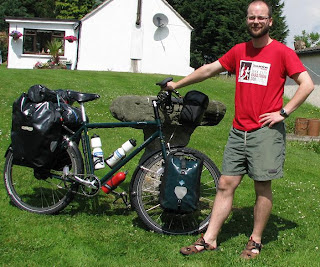 Rocinante and Julian - together at last
Posted by Julian Bloomer at 14:12 1 comment:

Eighteen days to go. Somedays it feels like I've already left. It helps that we seem to be breaking more climate records this summer in Ireland with regard to rainfall. Before, while people moaned, at least one could think that farmers will be happy with the extra rain but the farmers' pleasure ended a long time ago. The rainfall in the past week has varied between 50% above average in the west of the country to over 500% in the east. My home area of Wicklow is coming in at 467% above average.

In this context, it's sometimes difficult to imagine conditions in the desert. Emailing people I've tracked down through the WWWW (wonderful worldwideweb) who have previously cycled some of the southern 'pistes' in Morocco that I'm prospecting. Asking them about water availability and any villages enroute. Trying to decide if my compass would be better complemented with a GPS in order that I don't get lost. It's hard to know when such items are really necessary. I've looked at DVDs of the routes by people who've driven them on motorbikes, I have copies of compass bearings for the route, and I really don't want to carry extra stuff. Then I see photographs of some animal carcasses in the desert and I go back to ebay and order a Garmin etrex H.

I've also been reading some websites and blogs of others who have traveled roads further down the Atlantic coast of Africa. It's interesting how different people react to traveling in new places. Some people are fighting against things all the time, the dust, the insects, the officials. Others sail through, enjoying the challenges and embracing the different. The former will often retreat back home, exasperated, overwhelmed and disappointed. The latter will continue sailing. For an example of the latter see Peder af Geijerstam's account of his trip from Stockholm to Capetown.
Posted by Julian Bloomer at 15:54 No comments: