21: A midnight feast in Togo

After a successful few days in Accra securing visas for Benin and Nigeria, and praying for the electricity to come back and restore our overhead fan to action during the frequent power cuts, we headed out to the resort of Kokrobite, 30 kilometres west of the city, for a couple of days and nights of alcohol-fuelled hedonism in Big Milly's Backyard. Monday morning came around too quickly and we were back to the extreme sport of cycling on Accra's roads. We rode back to our base in town, the Dome Hotel, got our old room back, and had a quick bucket bath before dressing up as best we could for our visit to the Angolan embassy. Our efforts proved fruitless, however, as the lady from the consular section told us that they only issue visas to Ghanian residents. So the hunt continues, we'll try again in Nigeria.
Leaving Accra we headed east along the coast towards the Togolese border. Heavy traffic demands concentration and the high humidity makes for energy-sapping cycling. Fortunately there are juicy pineapples and fantastic ice cream in abundance. Eventually the traffic thins out and shortly before sunset we pick up supplies in a village before camping just beyond a police checkpoint. We were given water in the village to wash with, but as dirty as I am I think I might still be cleaner than the water we got, so I decline a shower. At 4 am the thunder and lightening show that had threatened us all night broke into rainfall and I lay half asleep in the lightshow with the tent staying surprisingly dry. The following morning Peter manages to get the same number of punctures (five) that I have had in over 12,000 km's before we have even ridden the bicycles 5 metres.
Yesterday we crossed the border and passed through Togo's capital, Lome, before continuing along the coast to Chez Alice, another overlander's haunt. In the evening we sit at a bar on the roadside and soon I'm hungry and looking for a snack. "Any peanuts?", I ask in my best French. I am led to several nearby foodstalls and eventually someone says yes. A few minutes later a large bowl of porridge is put in front of me. Somewhere along the line things got lost in translation, but at least I know where to get breakfast.
Lome, Togo
Trip distance: 12,310 km
Posted by Julian Bloomer at 13:35 No comments:

Late afternoon on the road to Burkina Faso's capital, Ouagadougou. A car pulls over in front of me and two serious-looking men step out simultaneously and turn to approach me. They don't look like police. "Are you Bob?", the pot-bellied passenger asks me in English. "Eh, no". This unexpected reply causes confusion and after they finish conversing together they turn to me again and tell me to wait under a nearby tree for twenty minutes: "your friend is coming". My friend? Twenty minutes later Polish Peter rolls up, our first meeting since Senegal. Our paths have crossed several times already from southern Morocco onwards. Peter had pulled up at a streetside food stall in Thomas Sankara's hometown of Yako and had been told by the customers there that his Irish brother had just left twenty minutes previously. 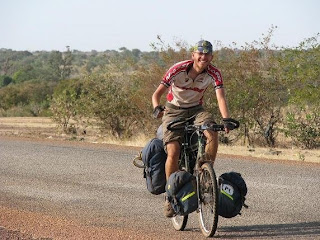 After a few days in Ouagadougou, on the usual West African business of obtaining visas, we continue south towards the border with Ghana. Transitions occur on all fronts. The dry and barren Sahelian landscape of northern and central Burkina transforms into ever taller and (somewhat) greener woodland. Religious and cultural transitions are also clearly evident as we moved from the Muslim-dominated countries of the Sahel to Christian-dominated Ghana. In Ghana it appears that every business and vehicle has to bear reference in some way or another to God or Jesus. Extraordinarily loud Christian pop music is pumped out from local drinking spots, competing with the muezzin's call to prayer. Most importantly, we are back in English-speaking land! A friendly Ghanian immigration officer chats away to us at the border. Peter got his visa for Ghana in Bamako and it is only valid for one-month. The extension process in Accra is notoriously cumbersome and would involve being without your passport for up to two weeks - not ideal if you're trying to apply for other visas. Would the officer consider providing a two-month stamp for a small 'souvenir'? Several Ghanian cedis later and Peter has a two-month visa. Undoubtedly such actions set bad precedents for weeding out corruption, yet the possibility of an expensive two-week bureaucratic delay has been avoided. 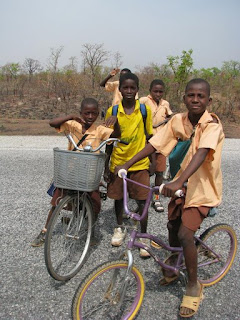 A couple of days are spent lounging around Bolgatanga as Peter gets his energy back after a bout of illness. The thermometer has risen up into the mid-thirties now as the end of the dry season approaches. The heat means that we're often sitting under the shade of a tree in a village, surrounded by curious youngsters who have come to stare at obroni (Ashanti for 'white'). We have also picked up some of the lingo, however, and yells of obroni are met with the now equally loud response of tum-tum (meaning 'black'). It feels quite politically incorrect at first, but it always results in hearty bouts of laughter when uttered. Shops in Ghana are certainly better stocked than in the countries to the north that I've passed through, although once back out in rural areas my poverty indicator kicks in. Our two measurements are the presence of cold Cokes and the range of street food. The latter is particularly tasty in Ghana, especially the sauce from the stew that is spread over rice or spaghetti. In small villages off the beaten track only cooked rice, and perhaps beans, are available to buy. In better supplied settlements spaghetti is also on offer, along with shredded cabbage, hardboiled eggs, and a range of meat stews. Although we normally avoid the latter, all of the former ingredients are combined in varying quantities and have together made up our breakfast, lunch, and dinners for the past three weeks. 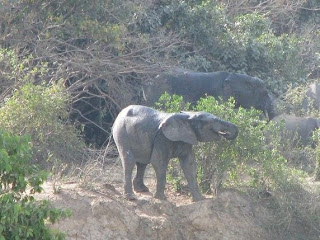 Elephants on the Burkina/Ghana border

Two roads led south out of Ghana's northern town of Tamale. Having failed to observe our maps and GPS properly, and instead relying on the road signs, we found ourselves on the road that led directly to Lake Volta, rather than the main route to Kumasi. Our unintended detour led us to the small town of Salaga and then to the banks of the lake at Makango, where we arrived just in time to catch the last fully-laden pirogue across the lake to Yeji. Our arrival on the other side coincided with the weekly departure for the Yaqui Queen, a ferry that plies a route between Yeji in the north and Akosombo in the south. For the equivalent of 15 euro each, we were able to shack up in a two-berth cabin for three nights as we plodded south along the largest artificial lake on the planet towards Accra. The boat made several stops along the route, generally involving large quantities of yams being brought aboard by hand (or head rather). The journey saved us approximately 300 km of pedaling. Perhaps there is a God afterall. 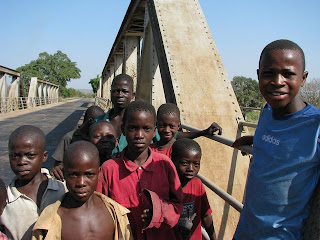 Boys on the bridge over the White Volta, northern Ghana

We negotiated our way into Accra and after a four-hour cycle around the pleasant (and not so pleasant) parts of the city in the humid Valentine's Day afternoon, eventually found a place to rest up for the few days that we anticipate it will take to process our next visa applications for Nigeria and Benin (Togo is available at the border). When I was asked for a destination before I left home or along the way, Accra was the goal that I spoke of. It became clear, however, after a couple of months into the journey that I was finally doing something that I've been wanting to do for many years and I knew that when I arrived in Ghana it wouldn't be easy to give up the freedom of the road. Reaching South Africa had been a frail dream ever since I began planning the trip and over the past few months it began to become an increasingly attractive goal. Some logistical obstacles needed to be overcome, however, if I was to keep cycling. Due to the continually evolving nature of political stability and security in central Africa, finding a viable overland route, either to the east or to southern Africa, always presents a challenge. At present Chad, western Central African Republic, and eastern Democratic Republic of Congo are not very amiable places for either the people who live there or hapless travellers wandering around on bicycles. The only viable option at present is a westerly one, via Cameroon, Gabon, Congo, and Angola to southern Africa, although there are still a couple of bureaucratic hurdles in terms of obtaining visas for some of the countries. This is to be the next stage of the journey. 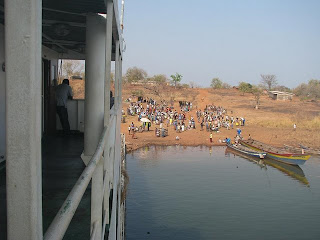