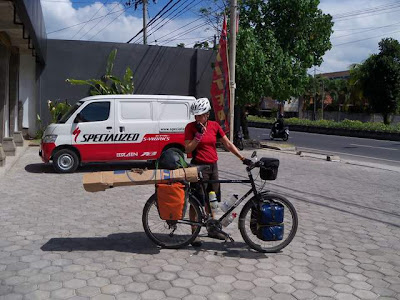 Getting our bike boxes in Bali...


Our Indonesian cycling adventures skidded to a halt on Kuta beach in Bali about six weeks ago, where the numbing reality of mass tourism gave me the impression that we'd already made it to Australia, even though we weren't going to get there this time around. A couple of days later we boxed our bikes and gear for the flight back to Bangkok. After a few days in the city and having left our bicycles and gear with our friend Hma at Bok Bok bikeshop, our final evening was another culinary fiesta on the streets of Bangkok, when Hma's friend cooked up a feast for us. 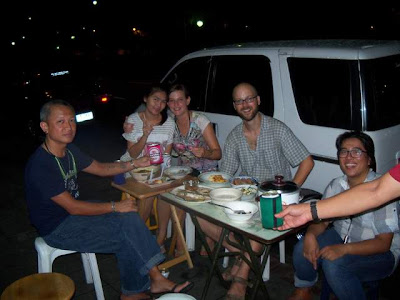 Part of the reason for returning home was to be with Ellie's grandad - Wolfgang Suschitzky - on his upcoming centenary. We hadn't planned it on purpose but our arrival back in a London that was gearing up for the Olympics coincided with a celebration of Wolf's lifetime of work in photography and film at a warm and packed BAFTA award ceremony. His own site shows a sample of some of the wonderful photographs he's shot over the years. 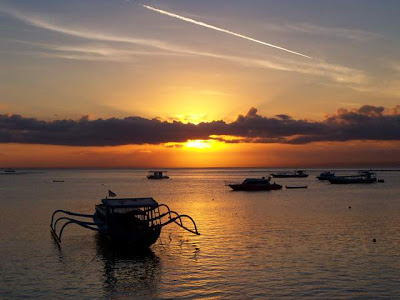 Sunset in Bali
Back in Ireland and some time to catch up briefly with family and friends, get a new passport and dip back into a life that I'd pedalled out of four years ago with only one other brief return two years back. Having a choice of more than two sets of clothes was a little overwhelming at first, not to mention the excitement of drinking tap water from our well. A poor summer and a dismal economic forecast try to cast a spell over the nation, at least in the media.  Yesterday afternoon I met with Peter Mcverry, the social activist and Jesuit priest whose organisation - The Peter Mcverry Trust - supports young homeless people in Dublin and who I plan to raise some more funds for over the coming 12 to 18 months. Along with some of his colleagues in the Trust, they outlined the issues that they have had to respond to with the continued increase in homelessness in recent years. Father Mcverry also discussed the deplorable state of social housing in Ireland, a vital mechanism for providing stability and a future for those making the transition from being homeless. Like similar organisations, the Trust is having to try and meet the increased demand for its services while experiencing a severe cut-back in funding from a cash-starved government. Next year marks the 30th anniversary of the organisation that began as a temporary solution for six young homeless boys. This year the Trust will deal with over 1200 requests for support. Hopefully by the end of this journey we can make a small contribution to keeping the crucial services of the Trust going. Here's a five-minute video from youtube where Peter Mcverry and others outline the work of the Trust:
The Peter Mcverry Trust
As for the travel plans: The bikes are going to be hibernating in Bangkok for another three or four months as we return to Nepal and India with our hiking boots before commencing the year long ride back to Europe from Asia towards the end of the year. Stay tuned.