The Italian coast appeared through the grey dusk and we were soon pedalling along the dark streets of Ancona, relieved to be out of the confines of our 18 hour ferry ride up the Adriatic. After a night in the deserted hostel up a near vertical cobbled alley by the train station we left the city and headed west through Marche. A rollercoaster ride followed that brought us through ever more interesting towns with wonderful hilltop fortifications and narrow alleys. We climbed into the hills that would bring us over the Italian spine to Umbria and Tuscany. Finding a camp spot proved difficult. Constant reminders that you were about to venture onto private property seemed stuck to every tree. Not something we have encountered since North America. Unfortunately we turned down the only real possibility, a disused quarry.  Instead we rode on along the rollercoaster in the dark for another couple of hours before reaching Sasso Ferrato and succumbing to a guesthouse.
Apart from one night in the tent in a forest near Florence, the rest of our eleven days in Italy was spent indoors at night in the company of wonderful warmshowers hosts (Dawn and Luke in Citta di Castello and Mateo near Genoa), with a family friend of Ellie's in Florence, and a couchsurfing couple (John and Caroline near La Spezia). We were fed wonderful food and given a place of dry our generally wet clothes as we had rain most days at some point.
Descending into Florence, we stopped to investigate a new noise from Ellie's rear wheel and discovered a one inch crack. Like Ellie's tumble in Tokyo when she fractured her elbow one kilometre from the hospital, this mechanical failure could have occurred anywhere along the route from Asia to Europe and been a much more significant problem but if it had to happen then at least in Lycra-clad Italy and a city like Florence we figured a replacement would be relatively easy to come by. And it was, although we had to settle for lesser quality rims than we hoped for but within a day we had a new set of wheels (the front rim had caved in but not cracked yet) and after wandering around Florence we headed on for the Riviera. By the time we reached Genoa we had enough of permeable wet gear and our warmshowers host Mateo cycled with us to the near Decathlon store where we fitted ourselves out with winter riding gear and upgraded my dish washing gloves to something a bit warmer.
Our final day and a half to the French border was enjoyed in cold winter sunshine. Passing the deserted frontier checkpoint we entered France and continued along the coast to the principality of Monaco and then Nice where we spent a couple of nights with Yza and Simon who recently returned from their own trip from France to Indonesia by bicycle.
Frejus, France
Pedalled: 82,236 km
Posted by Julian Bloomer at 22:24 No comments:

128. It's not so far to Tipperary - on across northern Greece

After delaying our departure for a couple of extra days on Limnos island where we were staying with Ellie's brother Toby, we dragged ourselves back onto the boat (the same boat that had been impounded a few weeks prior to our arrival for its poor safety record and also because the company was apparently having problems covering the running costs of the ferry) and headed back to the mainland at Kavala. Dark skies full of rain greeted our arrival and we abandoned our attempt to escape the city at night to find a campspot and opted for a friendly guesthouse up the incredibly steep and windy lanes of the old town, where we heaved our loaded mounts up just before the deluge.

We left in the morning during a lull in the downpour but it caught us later again. Our campsite that night was a building site for a fancy looking sea-view apartment in whose shell we pitched up and dried off.

In Thessaloniki we were hosted by a comedian and radio show host, Alex, who put us up at short notice and we swapped cycling tales over his homemade tsiphoro (the Greek version of grappa).

Our route across northern Greece to the Adriatic port town of Igoumenitsa followed the old and largely deserted national roads. After Veria, we camped in a leafless orchard and experienced the first cooler night in Greece now that we had left the warmer Aegean shoreline. Winding up to a monastery on the way to Kozani the next morning, we returned to stunning autumn scenes in the deciduous forests on the lower slopes. A couple of days later we were in the coniferous forests in the higher Pindos mountains, camped on a forest track beside a bear-warning sign when something stumbled up on the tent's guy rope. The jingling bell indicated something more domestic however like a goat or sheep.

It's hunting season now and on permitted days the report of shotguns booms across valleys. Camouflaged middle aged men drink their coffees at the ubiquitous cafés, weighed down like Pancho Villa with cartridge belts slung around their waists and their dogs whining loudly from the nearby pickup trucks.

Our final two days were a washout as we packed up our soaking home in the high Pindos before stopping in the pretty but touristy town of Metsovo where we sat in the brief sunshine drying ourselves and clothes in the central square amid well-heeled visitors and curious locals. We rode on into Ioannina in a dusk thunderstorm with ocassional flashes of lightning guiding our way. Neither our jackets and trousers nor our panniers give any pretense of being waterproof any longer. Indeed my jacket seems more adept at keeping the water in than out.

Yesterday we reached the Adriatic and stocked up on provisions for our 17 hour journey up to the Italian port city of Ancona. Celebrations for our own mini Hellenic Odyssey were a gyros (wonderful Greek fast food) and a beer. As our tent and clothes dried off in the warm passenger terminal, truckers from across Europe waited for the midnight sailing. A loud Tipperary accent shouting endless expletives down his mobile phone stood out from the rest.

PS apologies for those following my route on google maps. It is doing stupid things and won't display my updated info at the moment.
Posted by Julian Bloomer at 21:25 No comments:

127. Following the Via Egnatia

Our route out of Istanbul followed the Bosphorous northwards, past families, couples and fisherman thronging the shoreline on the Sunday afternoon. Turning inland and climbing up to the Belgrade hills that have supplied the city with drinking water since the Romans built the aqueducts and cisterns, we found refuge for the night by asking one of the park's watchmen if we could camp in the picnic area near his hut. Some of the forested area is threatened by the government's plans to build a contentious third bridge across the Bosphorous, near the Black Sea coast and alleviate some of the traffic congestion in Istanbul.

After a couple of days on Thracian backroads we returned to the main highway west at Tekirdag and followed the 110 across to the Greek/Turkish border at Ipsala. On our route through both Turkish and Greek Thrace we've been encountering remnants of the original Roman highway, the Via Egnatia, that linked Rome and Byzantium via the Adriatic.

We camped by the Aegean at night. On our second night we were about to set up camp by an abandoned fishing hut when a small four-wheel drive with tinted windows rolled slowly past. On its return back up the sandy track the uniformed figures inside - two Greek coastguards - waved back and let us be despite the 'no camping' signs. Towards the end of 2012 Greece stepped up its border controls on its land border with Turkey. Many illegal migrants now choose the maritime option - especially to Lesbos island further south of Limnos and just 6 miles away from Turkey.

We rode through the harvested cotton fields, the remains littering the roadside with a trail of cotton. Once lively villages lay quiet in the autumn sun. Reaching Kavala we caught the night ferry to Limnos island, four hours south, to visit Ellie's brother Toby and have spent the past couple of days exploring its main town, Myrina and the surroundings. Yesterday we rode out with the local cycling club that Toby has started and visited one of the guys old family house in the hills where the almond, pomegranate and persimmon trees were ready for harvesting.

Tomorrow we return to the mainland to continue our journey across northern Greece over the following week, to Igoumenitsa on the Adriatic coast and our ferry to Italy. 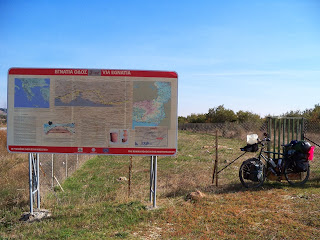 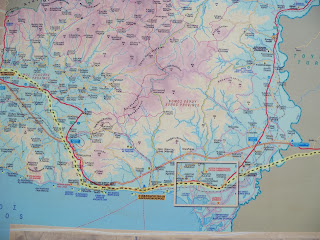 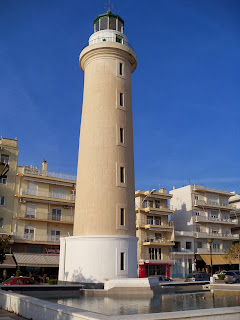 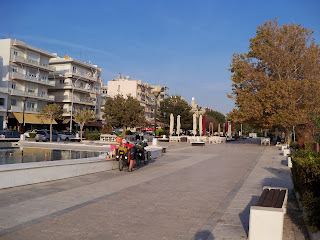 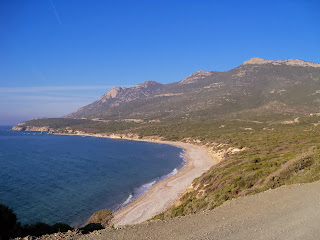 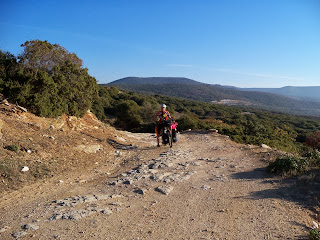 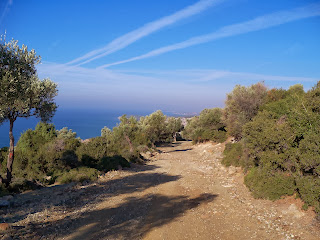 Many thanks for the latest donation to the Peter McVerry Trust, which brought the amount raised now over 1200 euros! If you would like to make a donation, you can do so via my fundraising page on the mycharity.ie website (click here). Thank you!
Posted by Julian Bloomer at 23:52 No comments: