Our last night in Colombia and we lay on the deck of the sailing boat that was going to bring us across this corner of the Caribbean to Panama. Earlier we had covered the bikes in a plastic sheet and lashed them to the railings with lots of rope and large, unsailorlike knots. Cranes were busy loading containers onto a ship in the port, while the gentle swell lapped against the side of our moored home for the next seven days. The city lights cast a yellow glow that faded as the rain moved down from the hills and into the harbour while the sound of the urban bustle barely reached our fibreglass island - an 8-berth catamaran that the captain believed could comfortably accommodate 18 passengers. 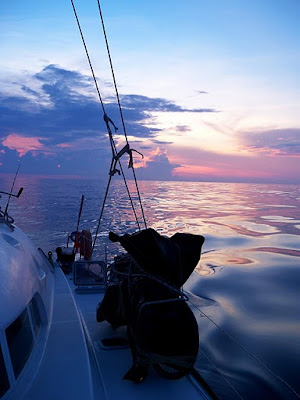 Morning time and several more passengers had arrived during the night and were already mid-way through the coffeepot and cereal. Studying the eating habits of our fellow inmates, it quickly became apparent that in order to assure yourself of some breakfast you would have to be poised mug and bowl in hand. Missing, however, were the two Africans whom the captain had taken a deposit from. An irate immigration official informed our captain that there were two forged passports in the bundle that he had dropped off at the immigration office to clear us out of Colombia. Our French captain feigned surprise to the official but told us about his doubts beforehand - neither of the two young men could speak French, despite traveling on French passports. The immigration official, indicated that for a price, he was willing to stamp the two forged passports with exit stamps as he was happy to burden some other country's immigration with the hassle of processing the forged passports and their holders. The captain went and paid some money, got the passports back, but then as his ship was listed in the passports he decided to throw them overboard and merely informed the two young men, whom appeared to be from Sierra Leone,  that they'd better run because the authorities were looking for them. So with eleven passengers and three crew on board and a day later than expected we set sail for Panama. 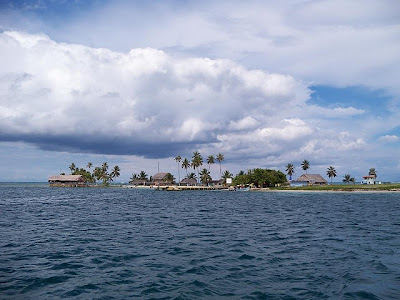 Our boat was bound first for Kuna Yala (also known as the San Blas islands), an archipelago of 365 islands, off eastern Panama's Carribean coast. Billed as a tropical paradise for wealthy visitors, the low-lying islands, surrounded by stunning, life-sustaining coral reefs and inhabited by the Kuna face a direct threat from any  future rise in sea-level. Meanwhile, tourism is big business on the islands and passing sailing boats and chartered cruisers lie in the sheltered bays beside the palm leaf homesteads. After leaving Cartagena, the wind failed to pick up and we were forced to motor the entire 200 nautical miles to Kuna Yala, a  rolling 50-hour journey that had most of us retreat to different corners of the deck. 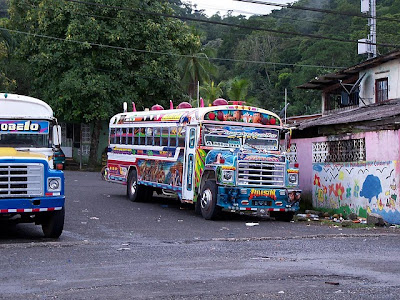 Where do old American school buses go before they die?
Our arrival in El Porvenir, a sandy atoll complete with palm trees and green coconuts, marked the official entry point into Panama. Ironically, one of the most picturesque of any recent border crossings could have become the most problematic when our captain was told by the rotund Panamanian immigration official that they had received a tip-off that he had clandestinos onboard. Everyone then paraded in front of the immigration official in various states of undress when their name was called out. A moment of confusion when the immigration official thought that it was the Irish passports that were fake, more explanations and then finally we all got stamped in. 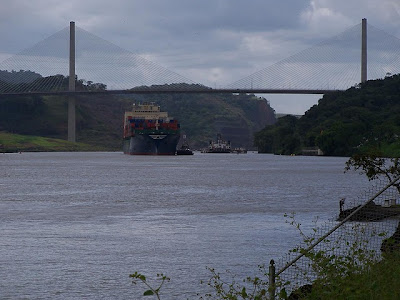 All of our fellow passengers disembarked at Carti in Kuna Yala, catching a four-wheel drive taxi to Panama city. We had opted, however, for one last sailing leg up to Puerto Lindo, closer to Colon and the entrance to the Panama canal. The captain assured us the voyage would be rougher than the previous days and once we were out from behind the protection of the reefs the boat lurched wildly in the turbulent seas. The captain would need his full concentration for the 12-hour night voyage and began fortifying himself with marijuana and rum. Heavy rain drove us inside, Ellie and I lying on the floor beside the amplier in a nauseous stupour. I awoke to a crescendo of rolling waves and deafening techno music in the middle of the night, our wild eyed captain snorting lines of cocaine off his main instrument panel. I sought sanctuary in our confined cabin as the music evolved into what Ellie later described as "inverted helicopter blades with alien noises being crunched through them". 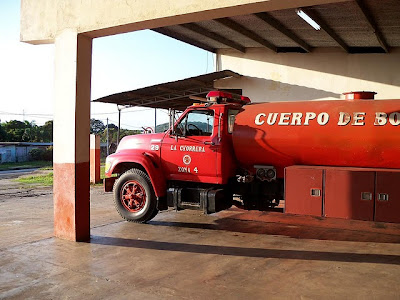 At ten o'clock the following morning, we stood by a small kiosk in the village of Puerto Lindo, still feeling very wobbly and trying to settle our still-rolling stomachs with crisps and lemonade before setting off on the bikes for Portobelo and on to Panama city via the Panama canal at Pedro Miguel locks. After a day off in Panama city we headed out on the Panamerican highway, for several days riding west towards the Costa Rican border. Most nights we found ourselves camping at firestations along the way, always being told we could stay as long as we wished. Our intention was to get off the Panamerican highway just before David and head north across the mountains to the Caribbean coast and the Bocas del Toro province, before continuing on into Costa Rica.

After a day climbing up the mountains, we were making a steep descent before some more climbing. I had arrived at a police checkpoint and had my passport checked and was waiting for Ellie to appear around the bend behind me, having just been visible before in my mirror. A passing car, however, motioned to me and told the police that there was something wrong. I headed back up the hill and found Ellie sitting by the side of the road, being helped by some passing Canadians, amid scattered panniers and a twisted bike. Ellie had  lost control on the corner on the fast descent and almost escaped without injury by going over the handlebars into the soft ditch but her left leg had gotten caught and twisted in the bike. A couple of pickup trucks stopped, the convoy of the mayor of Boquete, and we were offered a lift to the hospital in David. We  lifted Ellie into the front seat and piled the bikes and gear into the back and after a  45-minute hair-raising drive back down the mountain, with Ellie winching at the pain of every pothole we bumped over, we were in the emergency room of the regional hospital in David where painkillers were injected, an xray of her leg taken and her wounds cleaned. Three hours later the friendly doctor told Ellie that the xray was ok and she'd just have to take rest for the muscle damage. Two days since the crash and Ellie is shuffling well though still with some pain. So now we're resting up at a hostel in David, doing some therapy through television, and hope to be back pedaling soon.