As sunset approaches we cross northwards over the Tropic of Cancer, a sign announcing the fact and the putrid carcass of a cow marking the spot. Continuing on towards the silver city of Zacatecas, we begin searching in vain for access into the well-fenced wilderness that surrounds us. Twenty kilometres later we are approaching the first settlement we've seen all afternoon. An old hacienda surrounded by a ramshackle village. Many of the houses shutterless and abandoned. A placid man in clothes fresh from a day's hard work in the dusty fields, watches over his children as they gleefully torture a newly born pup. We ask if there is somewhere to pitch our tent and he tells us to ask el patron, as he points to the dimly lit hacienda. 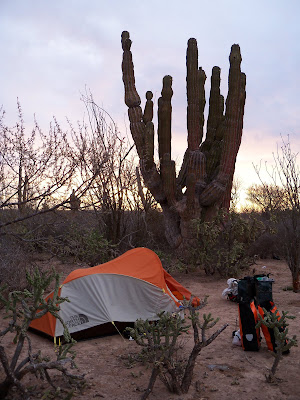 Luis appears behind a very bushy bigote and flamboyant cravat and listens to our request, gently nodding his head. Then without a word, beckons us along the collanaded walkway that surrounds the central square of the hacienda, which has been recently planted with large saplings. Opposite every column bird cages sit on pedestles, while a small army of kittens trips over each other. Larger cats prowl in almost every doorway and Luis explains that in a 400 year-old hacienda you have to decide whether you want to share it with mice or with cats. He pushes open a large wooden door and shows us an ornately decorated bedroom, mostly antique except for the ipod on the dressing table. Bookshelves line one wall. Encyclopedias at the top and possibly every book ever published on bull-fighting below. DVDs of all the magical moments of the famous toreros carefully stacked.
Luis is the third generation of his family to breed bulls for the region's many plaza de toros. The hacienda would have been built in the early years of the Spanish conquest and was a staging post on the route from Zacatecas to Aguascalientes and on to Mexico city, the route that brought the latest European fashions to the mining merchants in Zacatecas and the route that Spain drained the region of its silver blood. In the sitting room adjacent our quarters for the night, colourful banners announce the results of the day's fight and cover the four walls of the room from floor to ceiling, spanning over sixty years of blood letting. The large busts of three losers are mounted on the walls. Before he leaves for the evening, Luis shows us to the kitchen and tells us to help ourselves. 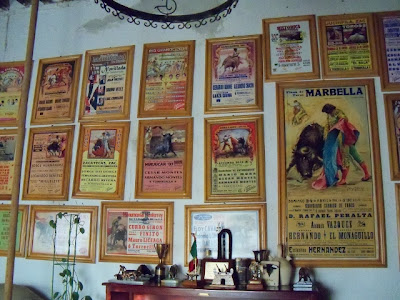 After a couple of day's rest in Zacatecas, where Ellie's Brooks saddle finally catches up with us thanks to Hans, we continue northeast across the antiplano. Three days later and an hour after sunset we arrive into the zocalo in Durango city. That afternoon a pickup truck had a blow-out in front of Ellie and rolled into the fields, spilling its passengers out. I only heard the explosion and saw the cloud of dust from farther up the road and returned to the crash. More people arrived and we headed on. The governor of Durango state had made an announcement the previous week that residents of the state's capital should avoid being out on the streets after 8pm due to the rise in drug-related violence. Apart from high levels of heavily armed police and military patrols and the Mexican media's obsession with publishing graphic images of those killed on its front pages, the violencia is something that has felt remote. The states of Durango and Sinaloa, however, are among some of the worst affected parts of the country. A couple of weeks after we leave Durango city, the first mass grave is discovered in a residential neighbourhood. So far 104 bodies have been found. This is in addition to the bodies of 183 people found in the north eastern state of Tamaulipas. Many of the victims are believed to have been migrants heading for the border who were kidnapped and murdered by the cartels. 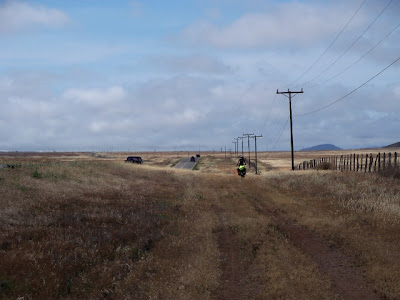 In recent weeks public demonstrations were held in many parts of the country as the poet Javier Sicilia called for protests against the cartels and especially President Calderon and his government's policies of using force against the cartels that has seen the levels of violence rise exponentially in the last years. Mr. Sicilia's own son was murdered in Cuernavaca last month and he has since taken up the cause of challenging the current strategies and encouraging people to protest. Whether the government changes its strategy or not, any successful strategy is surely going to require the participation of Mexican's as they stand up to the intimidation and fear that is permeating so many aspects of the country now. The US-led strategy of encouraging governments to use their security forces to combat the drug cartels and paramilitaries has proven time and again to fail and alternative strategies have to be found.
From Durango, we pedal along the Devil's Spine as Highway 40 leads us over and across the magnificent Sierra Madre Occidental, out of the highlands and down to the dry and dusty Pacific coast at Mazatlan in Sinaloa state. From Mazatlan we catch the 16-hour ferry to La Paz, at the southern end of the Baja California penninsula. The last leg of our Mexican journey is quite different to the rest of our time in Mexico. Baja has long been a sparsely populated region of Mexico and with its proximity to the US, tourism is the prime economic activity. Many Americans and Canadians live year round and many more come down for the winter months and swap the snow for blue skies and sand. As a result, as many looming motorhomes pulling equally large boats and surfboarded pickups ply the narrow, shoulderless Highway 1 that is the only paved road running the length of the penninsula, over 1600 kilometres from Tijuana in the north to Cabos San Lucas in the south. Other cyclists we had met in central America waxed lyrical about the joys of Baja. Certainly the camping was excellent and if you like cacti, you'll be very impressed with the more than 400 species found in the Baja desert. But they were heading south. 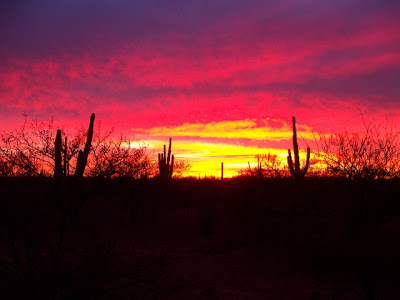 Almost every day in the past month we have had a headwind, sometimes picking up from a stiff breeze in the morning to a pedal stopping 60 kph in the evening. On the Pacific side of Baja, the prevailing north westerlies kept our eyes sandy and our ears deafened. On the shore of the Sea of Cortez, El Norte blew uncharacteristically late in the spring. An extension of the Santa Ana winds in California, the air roars down from high pressure spots in Utah and Nevada to low pressure spots into the Tropics. There's a reason most cyclists head southwards and why sailors will go via Hawaii to get to Washington or British Colombia from Mexico. So most mornings we are cycling by half past six, making the best of the calmer early morning before the winds pick up and we have to seek refuge behind the biggest cactus we can find. We meet fabuously friendly and warm-hearted people, who feed us and offer us places to stay in the US. Day one thousand from leaving home and we find ourselves camped up on a deserted beach on the Sea of Cortez. Ellie produces a small bottle of tequila and sangrita and we get a fire going and watch the plough and pleiades 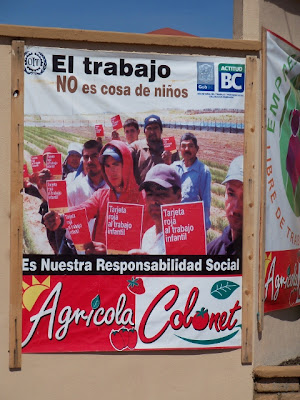 For the first time in two continents drivers in Baja, from both sides of the border, have become frequently aggressive, giving the finger, blowing their horn and Ellie even had a beer bottle lobbed at her from a passing car one afternoon. But we've also been cycling during Semana Santa and we had been warned that the roads and the drivers get a bit crazy as many people head down from the northern border cities to south Baja's beaches for their two-week Easter break. Two days in a row we come upon serious car crashes, one at least involving a couple of fatalities. We are forced off the road on a bend as a truck skims past us. One afternoon a friendly drunk fetches two high visibility vests from his house. We glow like Christmas trees as our nerves get a little more frayed each day. Some days we choose the bumpy dirt tracks that run alongside the tar road as a better option than braving the traffic. Finally the road turns off the barren desert plains and into the hills, passing through vineyards around Santo Tomas. Thirty kilometres from Ensenada a shoulder appears after over 1300 kilometres of character building. Big smiles and whoops. We survived. Unbelievably the end of Latin America is just over a day's ride away, along the quiet Highway 3 that will take us from Ensenada to the small border crossing at Tecate, through Baja's wine producing region.

In Chapultepec, a suburb on the south side of Ensenada, we find the lovely Senora Delia, who holds the key for a casa del ciclista and we have the house to ourselves. We need proof of onward travel before entering the US. We immerse ourselves in the bureaucracy of Asian travel and we book our flight from Vancouver to Tokyo for the end of July. In the sitting room, Valdo's recumbent bicycle is on display where one might put a TV. Every mealtime we contemplate it. Valdo was a 65 year old Brazilian man who was cycling around the world. He died of a heart attack in his tent last year in one of those barren, windy spots in the Baja and was later buried in Ensenada. A collection of the newspaper articles that documented the former missionary's journey lies on the shelf, along with some photos of Valdo, some of them naked as he pedaled across the Bolivian salt flats, a big smile on his face. A couple of weeks ago a Spanish cyclist came through, heading north to Alaska and he is bringing Valdo's Brazilian flag with him. Quien con la esperanza vive, alegre muere, vaya bien a mi amigo!