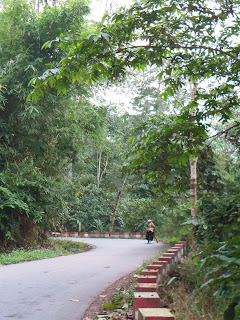 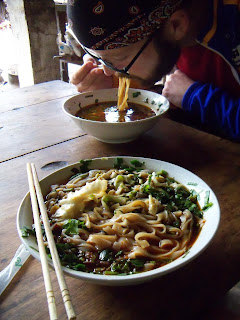 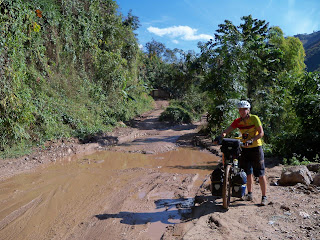 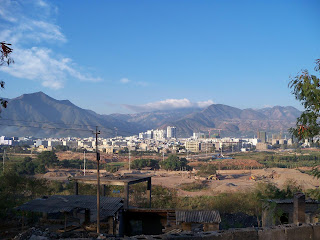 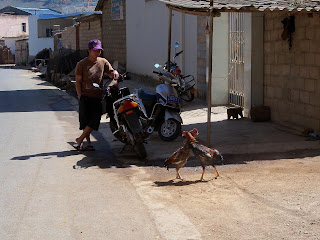 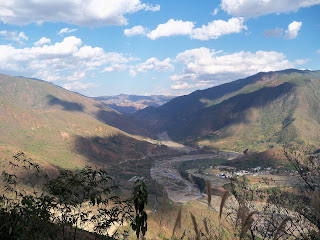 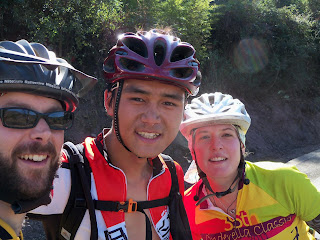 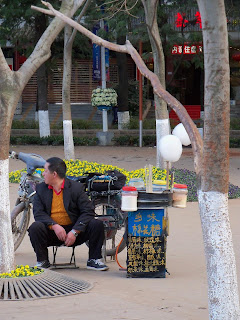 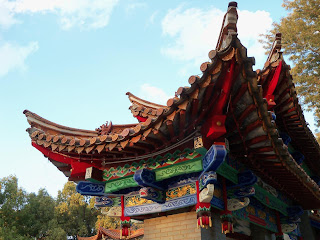 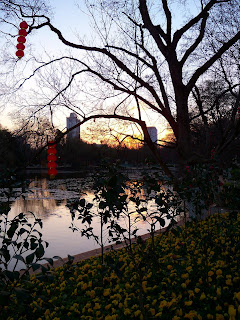 We had entered China before we'd even left Laos. Boten special
economic zone straddles the border and was built by the Chinese. It
looks like China. The street signs, the shops, the policemen, the
concrete apartment blocks. Chinese truck drivers were already forming
a queue before the Lao immigration windows opened for the day. By nine
thirty we were through both Lao and Chinese immigration and apart from
a cursory inspection by a serious young Chinese customs officer of our
passports, we were waved into China's Yunnan province.

We followed the main highway to Mengla, the road so wide at times it
resembled a runway. Laos is small scale. Little of small-scale China
remains. Agriculture is a serious business this side of the border.
Polythene wrapped fields, valley floors covered with protective
netting, along with prolific use of the latest modern wonder
chemicals. Bananas grew cocooned in large blue plastic bags and were
kept insulated from the winter chill with white foam wrapping. All of
which gathered in small mountains of rubbish piles along the roadside.

For many centuries Yunnan lay beyond the reach of the feudal states
and then empires of the Middle Kingdom. Thant Myint U describes Yunnan
as "China's wild southwest. It was a land of outlaws and miscreants
and exotic religious sects, a place where musket-slinging Han settlers
battled bow and arrow-wielding tribesmen and aliens from beyond the
pale. Its jungle-clad mountains teemed with fearsome animals and its
torrential rivers, thousand foot cliffs and deadly miasmas deterred
all but the hardiest of frontiersmen." The jungle has for the most
part been replaced by cash crops and plantation trees and many of the
rivers have been dammed for hydropower to feed the nation's insatiable
appetite for energy. Still some pockets remained and we spent several
days following the quiet backroads northwards from Mengla to
Jiangcheng, through the Dai villages - now a hotch-potch of
traditional wooden houses and generic concrete boxes. The road wound
mercilessly over the mountains that dominate the province. This is
China's most ethnically diverse and biodiverse region and home to some
of Asia's major rivers - the Irrawaddy, the Mekong, the Yangtze and
the Pearl rivers all pass through the province on their way down from
the adajacent Tibetan plateau.

Occupying a pivotal position with its international borders to south
east Asia and in particular Burma and a coveted supply route to the
Indian ocean, the province has become of prime importance in the
country's development policies. The old city of Kunming where we
arrived a couple of days ago has been razed to the ground in the past
twenty years and replaced with a modern skyline and yet remarkably
devoid of inhabitants. It's the Spring festival - the Chinese New Year
- and the largest annual human migration is taking place. Over 200
million Chinese are returning home - mostly migrant workers from the
cities to their rural homelands, often a trio of father, mother and
child on a motorbike. Most businesses are closed and fireworks blast
away in fresh nighttime air. Strong winds blow away any pollution and
visitors from northern smog-bound cities are astounded that they can
see the stars in this 1900 metre high metropolis of 6 million people.

Thanks to more donations, we're almost at the first thousand - 992
euros have been raised so far for the Peter McVerry Trust. Donations
can be made via my webpage on mycharity.ie -
www.mycharity.ie/event/julian_bloomer_the_slow_way_home
Posted by Julian Bloomer at 15:51 No comments: