113. Rockin' and rollin' in Gansu: Over the Wushaoling Pass and up the Hexi Corridor

Four wonderful days of doing little except hanging out in the company
of good people with our host Kevin and his friends in Lanzhou and we
were back on the bikes riding west along the Yellow River and chasing
a tourer who had a billowing skull and cross bones mounted on the back
of his laden bike. With no mutual words to share except place names on
maps, we established that he was from Shaanxi province and bound for
Lhasa - a popular pilgrimmage route for young Chinese tourers these
days who can travel without permit problems onto the roof of the
world. At a railway crossing our silent smiling companion hit the road
when his wheels caught in the lines and he picked himself up and
dusted down his torn trousers signalling he was ok. Shortly after we
waved goodbye and stopped for a late and extortionate lunch of beef
and vegetables.

We crossed north over the Yellow River and headed up the G312 - the
highway that will take us the remaining 2700 odd kilometres across
western China. Originating in Shanghai on the east coast, the G312
crosses China along some of the ancient trading routes that were known
as the Silk Road. The new G30 motorway and the busy western railway
line also accompanied the venerable and aged original G312 up a wide
valley towards the Daban Shan mountains. Our first night out saw us
pitch up in a sheltered sliver of ploughed but not yet planted field
on the edge of a village. In the morning we cooked our porridge under
the silent gaze of an old farmer who had first judged us from afar and
then curiousity got the better of him and stood above us for a few
minutes before wandering back towards the village. Other villagers
return smiles and wave at us as we push our bikes back to the road and
ride north.

With a more sluggish pace we continued up the gentle incline into an
unfavourable wind as men and women took to their fields. We passed
Yongdeng and then through the Tianzhu Tibetan autonomous county while
a black sky gathered on the Daban Shan and we arrived into Dachaigou
in our rain gear with cold, wet faces. Only about 23 km short of the
summit of our almost 3000 metre Wushaoling pass, winter was still here
as we tried to unsuccessfully arrange a bed for the night, the local
police insisting we'd have to backtrack the 20 km we'd just toiled up
from Tianzhu rather than stay at the local guesthouse. The rain was
easing but flakes of snow began to fall as we cursed the ridiculous
rules and bade farewell to the warmth of the stove-heated police
station and headed out into the freezing headwind with supplies for
the night. Fortunately we struck lucky a few kilometres out of town
and found an excavated site off the road where we could pitch up out
of the worst excesses of the wind. Using all our cold weather gear and
winter sleeping bags the night was pretty comfortable except for the
dashes outside when nature called. We woke up to blue sky and
snow-covered mountains surrounding us. We pushed on up towards the
pass and after collecting some hot water for the flask and supplies at
a village shop we reached Wushaoling's windy summit (2990 metres) at
about 10 a.m. before descending below the snow-line into Anyuan where
we had steamed buns and eggs for a late breakfast around a luke warm
stove.

We were aiming for Wuwei, an important outpost of the Middle Kingdom
on the lower edge of the Gobi and the eastern end of the Hexi
Corridor, and stripped off layers as we dropped over 1500 meters into
the bustling little city. After no success with the cheaper lodging
options we resorted to the guidebook's recommendation, a fancy hotel
beside the reconstructed and impressive south gate, where for the
second time in a couple of weeks I was carting our Gobi sand-covered
paraphernalia around a fancy hotel with a luggage trolley.

We decided to take a day off to check out the sights including the
ancient bell tower that stands in the midde of a derelict site and the
Confucious temple and stele that are a Chinese version of the Rosetta
stone making translations possible from a double-sided stele featuring
the ancient Xin characters on one side and the more modern Chinese
characters on the other. Unlike other tourist sights in China, in this
part of the country you feel like you have discovered them yourself as
you wander alone.

With weather reports showing a generous tailwind we were back on our
bikes the next day with plans to reach Zhangye in three days time and
stay with another Peace Corps volunteer. Ellie was struggling though
with a cold and sinusitis and so we pulled over in Yongchang after a
local young rocker pulled up on his flashy motorbike and invited us
for lunch. Vinny as his friends call him is not exactly what one
expects to find in the Gansu desert - an accomplanished rock guitarist
speaking excellent English with his own bar and a passion for fast
motorbikes, the 26 year old brought us out for dinner in the evening
with his friends after finding us a hotel room across the street from
his pool/rock bar. He also fetched Ellie some tradtional chinese
medicine for her sinus.

Another stopover today in Yongchang to let Ellie recover before we
move on up the Hexi Corridor to Zhangye over the next couple of days.

112. Over the mountains to Lanzhou 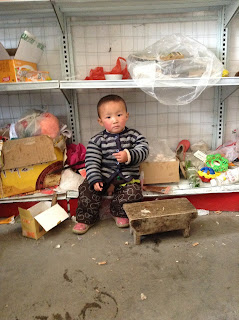 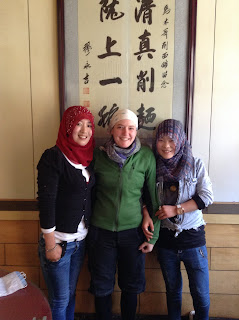 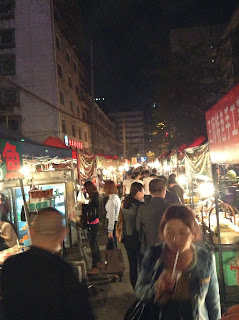 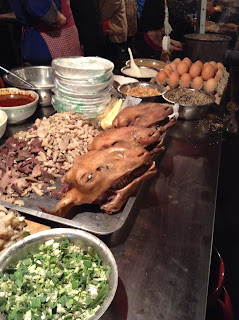 We rode out of Chengdu in a convoy of three, with our companion Mark setting the pace for the first day that ensured we blew off the cobwebs from our month long layover. We almost reached Mianyang before taking a room on the roadside. Like some of the newer hotels we have lodged in before, our shared bedroom came with a clear glass screened shower and squat toilet, so those wishing to spectate can do so if they please.  Mark was bound for Songpan and we said goodbye the next morning before we rode through a soggy Mianyang. One of Sichuan's main cities and with a population equivalent to Ireland, the city was close to the epicentre of the 2008 earthquake that had caused particularly severe damage to schools and left an estimated 7000 pupils dead in the city alone.
The G108 became quieter on the third day after Zitong as it wound up into the cypress covered hillside around Qiqushan temple. We have met a lot of local cyclists out touring over the past couple of weeks which is great to see. One fellow from Guangzhou had already clocked up 12000 km on a tour around China. One day we passed a trio on roller blades.
We ended up in Sichuan's northern city of Guangyuan after five days and almost chose a longer route via Xian as there was still some concern that there was no diagnosis over my guts and it might be better to stay closer to bigger towns than the more remote route over the mountains. That evening though I got the good news that the tests done in Hong Kong had finally proven amoebic colitis caused by an infection I had picked up along the road and which I had been treated for. So with this news we doubled back 20 km on the G108 and joined the 212 that would take us almost 800 km over the mountains to Gansu's provincial capital in Lanzhou. We had been evicted from our standard cheap hotel in Guangyuan as the city is the site of a nuclear facility and the authorities are more jittery than normal about the presence of hairy big-noses so we found ourselves confined to the posh international hotel where we had to fork out 25 euros for a fancy room - about five times are normal rate in China. For the first and hopefully last time on the trip a bemused bell boy loaded our mud spattered panniers onto the trolley and up to our quarters on the umpteenth floor.
Across the provincial border in Gansu we entered one of China's poorest provinces although the construction continued even in these isolated mountains as the pillar foundations and tunnels for an elevated highway and a high speed train were being put in. Few foreigners make it this way and curiosity increased among the locals and the authorities. Most evenings the police would have heard about the cycling laowais in town and turn up with and bilingual registration forms for the legal aliens. I don't know where a this paper work ends up or if there's a central system charting our progress.
The further north we went the landscape shrivelled up and desiccated hillsides through dust clouds in the air when gusts of wind blew. The harsh landscape was also etched into the faces of those who survive here. Those old enough may have experienced the horrors of the famine as a result of Mao's misguided policies in the late 1950s. Gansu and Sichuan were two of the worst affected areas in the country. This land is the cultural crossroads of China. The red-cheeked highlanders mix with Han and the Muslim Hui. The latter appearing to have cornered much of the market with their fresh noodles that closely resemble pasta. Mosques are another feature that lets Islamic Central Asia presence feel much closer now.
For the past few days we've been staying with Kevin, a Peace Corps volunteer who works at a university here in Lanzhou. We've spent time with several of the volunteers and Kevin asked us to give a talk to his students about the trip which was attended by about forty enthusiastic faces who were very engaged and curious. Life for most of the students here is quite strict and for the duration of their degree they share eight bed dormitories and have evening curfews. For many it's their first step of independence and can be quite a challenge for them to learn how to fend for themselves. Real freedom doesn't really commence until they graduate and begin working but social expectations that marriage should follow quite quickly puts pressure on young people to settle down before too long.
Lanzhou is also the point at which we join the historical trading routes that established the Silk Road. Lying on the upper reaches of the Yellow River, Lanzhou has long been an important outpost of the Middle Kingdom. The farthest reaches of the Great Wall lay just to the north of here, between the southern fringe of the Gobi desert and the Qilian Shan range where we will push north through Gansu's narrow waist, known as the Hexi corridor, in the coming fortnight.
Lanzhou, Gansu, PRC
Pedalled: 69,419 km
Posted by Julian Bloomer at 00:55 No comments: