In fact, these days there are far less elephants wandering around Laos than the 14th century when Prince Fa Ngum bestowed his kingdom with the wildly exaggerated quota of pachyderms to instill fear in his covetous neighbours. So far we've only spotted two specimens, as we caught a fleeting glimpse of two large rear ends and a mahout balanced precariously atop, swerve around a mountain bend in the back of an articulated truck and disappear down the twists and turns of a mountain road. We couldn't see their faces but I'm sure the experience for these large passengers wasn't dissimilar to the quesy-faced bus passengers we saw as a diesel drenching behemoth groaned past and began another slalom event.
The past fortnight has been characterised by hills. Generally spending our mornings going very slowly up them before enjoying an all too brief descent. The landscape of forest and cultivated hillslopes with only the occasional friendly roadside village dotting an otherwise remote and sparsely populated area in this region. As relentless as our central American baseline of the Guatemalan highlands by which we measure degrees of vertical improbability, the newly paved Laotian thoroughfares are at least generally well graded and traffic-less and have been a pleasure to ride on. Supplies available in the villages are generally only the most important, warm beer and canned mackeral, the lack of commerce clearly showing the dependence of the people on the surrounding forest. Over 70 per cent of the non-rice food consumed in rural Laos comes from the forest.
As in similar areas throughout the world, an increasing imbalance is occuring in the exploitation of natural resources and deforestation threatens to change a way of life. The difficulty between creating opportunities for robust rural livelihoods and conserving the foundation (the forest) that many of these livelihoods depend on is a difficult one. The presence of powerful forces in the rapidly developing economies surrounding Laos, particularly Thailand, China and Vietnam, has seen a huge influx of expertise in areas such as road and dam building, and a similarly huge outflux of raw materials, especially tropical hardwood.
Tourism is another recent industry in Laos. More cautiously welcomed perhaps since all the flaws and lesions of neighbouring Thailand's experience of the industry as a reminder of the pitfalls as well as the prosperity that tourism can bring. A conscious attempt at preventing cultural erosion is evident in the signs as well as the guidebooks, appealing to visitors to respect the unique and fragile culture they are witnessing, is admirable but hardly sufficient. This morning in Luang Prabang we rose before dawn to watch the monks from the many monasteries collect alms along the streets from the devout. As the highest grade sticky rice and ripe bananas were put into the monk's collection bowls, crowds of tourists (from both near and far), poked their camera lenses and flashes into the monk's faces, surrounding the procession like paparazzi and left both of us with a feeling of saddness and violation. Last night the English-speaking owner of the guesthouse we're in here in Luang Prabang talked about the changes, positive and negative, that he has witnessed in his native city and while he has invested in the industry he fears the impact that the outside will have on the way of life here.
After our sobering visit to the alms collection this morning, our faith was restored in fellow travelers when we were invited to a breakfast of coffee and sandwiches with a Dutch-Canadian couple in their sixties who reminisced about their own experiences, beginning in rural Zambia in the early 70s. The allure of Laos, with its quiet rural roads and the very friendly demeanor of many people, has drawn us in and we're really enjoying our time here. Ten years ago I'd spent a couple of months here on an internship with Concern, an Irish NGO that has since left the country due to financial constraints but we did manage to see some of the legacy of their work in Hua Phan province and most importantly managed to find a water pump that they had put in place with which to fill our water bottles. 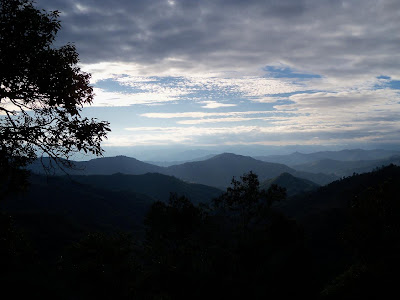 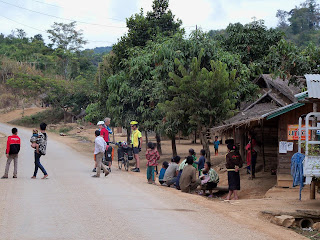 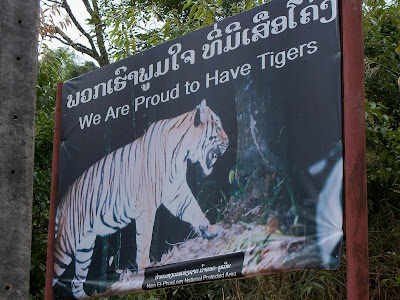 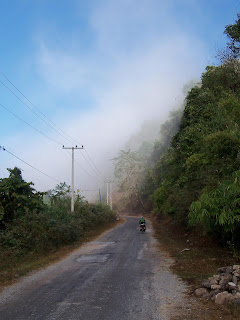 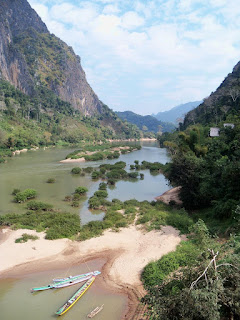 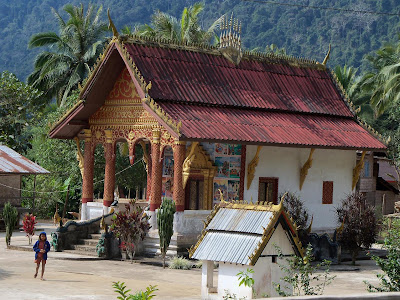 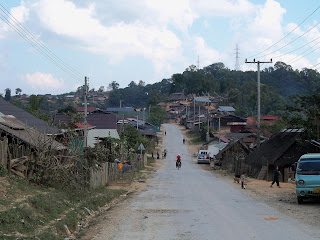 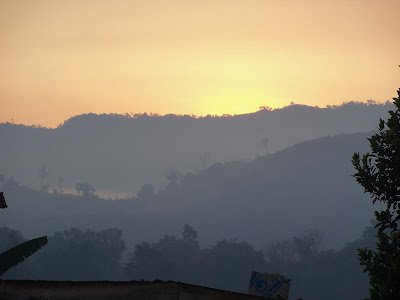 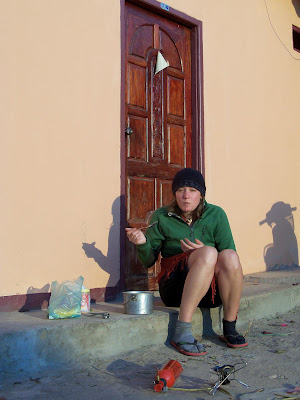 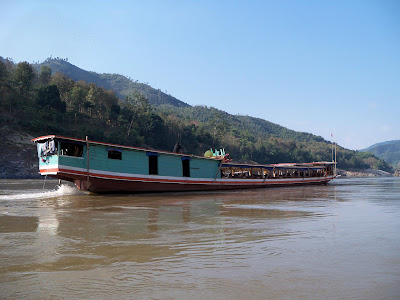 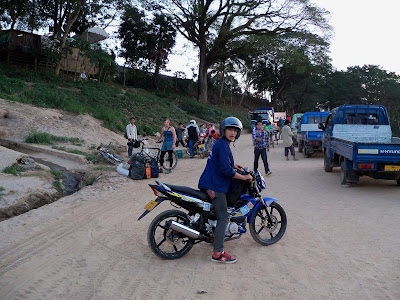 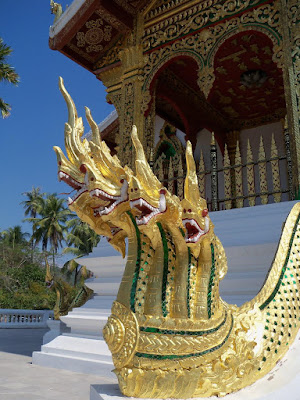 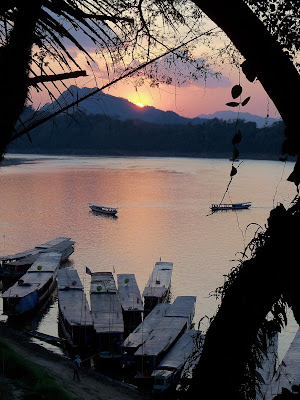 After an extended stay in Hanoi due to Ellie getting a cold in time for Christmas and then giving it to me, it was almost 2012 before we left Vietnam's historical capital for the quiet roads of the Red River delta. By New Year's Eve we had made it to Ninh Binh but the city had little enthusiasm for any celebrations for the Gregorian New Year and was saving itself for the Tet festival later this month. Despite a valiant effort we were back home in bed and lights out before the New Year arrived. 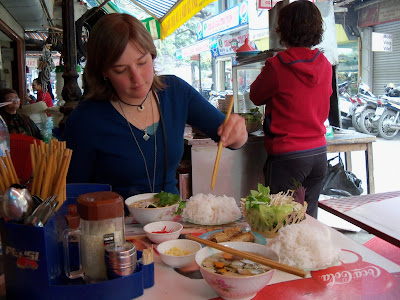 Bun cha in Hanoi
From Ninh Binh our westerly route traversed karst peaks before leaving the flat coastal plain and climbing into the hills to Cuc Phuong national park. On our map of Southeast Asia the mountains ripple northwestwards, all the way to the Himilayas. Cuc Phuong is an island of tranquility and respect for furry things and we spent a day visiting the endangered primates and turtle conservation centres before pedaling and walking around the park. By night we camped near the entrance and woke each morning to the siren-like howls of the gibbons waking up in the rescue centre. On our second morning I climbed out of the tent and into the fetid pit latrine that is being slowly reclaimed by the forest and conducted the morning's ablutions only to discover some internal bleeding. Alarmed and confident that my days were numbered as the rare tropical disease that I'd contracted was going to dissolve my organs, it was decided that a trip back to Hanoi's medical facilities was a good idea before continuing our journey into the remoter corners of Laos. Leaving our bikes and gear with the staff at the park, we bussed it back to Hanoi, where a French-accented doctor diagnosed a large internal hemorrhoid as the culprit and explained that many a foreigner's digestive tract succumbs to the fibre-less white rice diet.
Getting back to our bikes was a test of will against the Vietnamese public transport systems. Our bus ride proceeding smoothly but we were foiled at the last hurdle when a pair of motorbike taxi highwaymen tried to swindle us before abandoning us by the roadside several kilometres from the park's entrance. Lots of shouting and loss of face all-round saw us back on the bikes and dropped to the entrance, both of us delighted to see our bikes again. Such incidents are unfortunately very common in Vietnam with travellers frequently being overcharged obscene amounts as well as being threatened or actually evicted from the bus or motorbike unless a substantial sum is paid. The following morning after the gibbons told us it was time to pack our tent and head off into the cold drizzle we chatted with a German lady who quite matter-of-factly told us how she had gotten lost in the forest three days previously whilst out for a short walk and spent two nights surviving on water from leaves and her own urine (although this is a diuretic in case you want to try this at home) before eventually finding her way back to a trail.
Three days riding brought us up to the remote and quiet border crossing at Na Meo, during which time our faith was once again restored in humanity by the friendly locals we met along the way. Our days were still loud however, with the ear-splitting horns a feature of every moving vehicle, and even the children's shrieks of hello seemed disproportionately loud to their small bodies. After months of Sino-Vietnamese traffic, we crossed into tranquil Laos and spent our first day riding steep hills and along valleys with dried-out paddy fields surrounding bucolic villages while people smiled and said sabaidee to us amidst the background noise of ducklings, chickens and piglets. 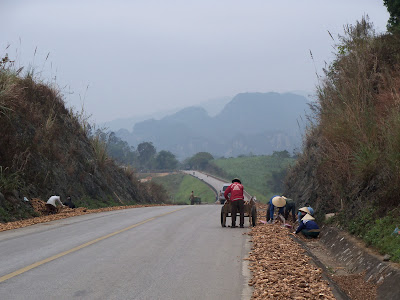 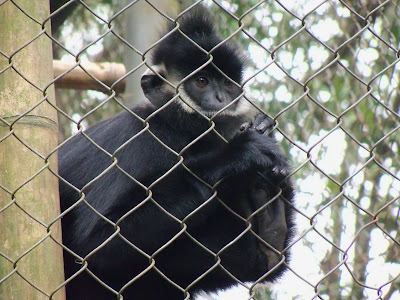 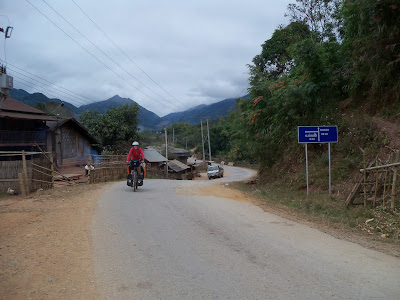 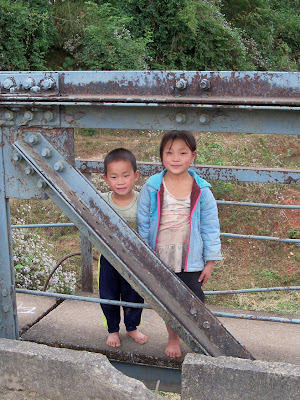 Vieng Xai was our first stop in the land of a million elephants (although only two thousand have survived). A visit to the communist Pathet Lao's base in the limestone cliffs provided a memorable introduction to Laos. The revolutionaries had sheltered here during the nine year bombardment that began in the early 60s when the US Air Force and it's CIA owned private company Air America waged an aerial war in Laos that earned the country the sad statistic of being the most bombed country in the world per capita, with over 2 million tons of munitions being dropped during the covert campaign. The terrible legacy of the war lives on in the form of unexploded ordnance, particularly cluster bombs, that has claimed 12,000 casualties since 1973 in Laos. 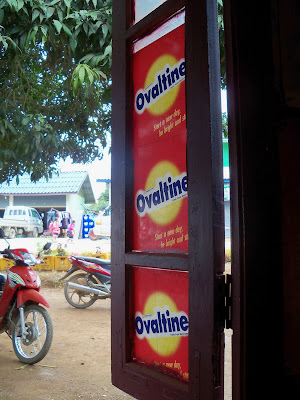 Another hill or two and we reached the provincial capital of Sam Neua yesterday, still shrouded by a cold grey sky that has hung over us for the past several weeks and daytime temperatures only barely making it into the double digits at times. The local police volleyball team were celebrating a recent victory with Beer Lao and grilled goat yesterday evening at a bamboo shack and we were invited to join the party, while today involved washing clothes and trawling the market for supplies for our onward journey. 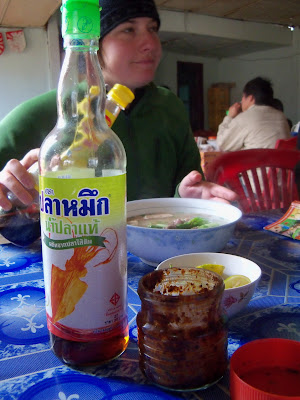