A howling wind, rain and crashing waves greeted us on arrival at New Haven port after the four hour stint across the Channel from Dieppe. Ellie's brother Ben (hero of the Turkey trip) was also there, drenched and cold and we followed him west to Brighton, initially along the busy coast road and then on the promenade that was being battered by the sea. After a rest day with Ben and Vicky in Brighton and an early Christmas dinner with Vicky's family it was time for the last stage to Ellie's home in Norwich - a three day journey that took us first to Brixton in south London, then north to Cambridge and finally the last leg to Norwich. Ben had made sleeping arrangements with friends along the route and after saying goodbye to our wonderful host, Tom and his family in Cambridge, we were blown with a very strong tailwind much of the way to Norfolk.

It has been interesting experience, in being able to communicate properly with people once again. Ellie and I stood rather bewildered at the chaos and mayhem of a Thursday evening in downtown Brixton, ambulances and police sirens filling the night sky as touts tried to sell tickets to the nearby Pogues concert and young folk stumbled loudly down the street. As we passed through central London the next morning a group of police were studiously examining the junctions for traffic violations in the wake of the spate of cyclist fatalities a couple of weeks ago. One questioned his supervisor as to whether I had made an illegal move down the side of a bus whilst the traffic stopped at the lights. In villages people asked if were we off on holidays, assuming that the middle of winter is a normal time for people to go pedal-about. One man whom I asked for directions told us about his cycling son who had been detained in Russia after entering. Cars occasionally honked when they felt we were delaying them in their rush somewhere.

Ellie has clocked over 41,000 km since we began cycling in Colombia three years and two months ago and visited thirty countries since then. We weren't sure if tears would be shed or just relief at having finished a large, pedally chapter in Ellie's life but in the end tiredness was the dominant reaction and I passed out by the fireside after dinner as everyone else did the paper's crossword.

After a Christmas break with Ellie's family I'll do the last stretch across England and Wales to Ireland. 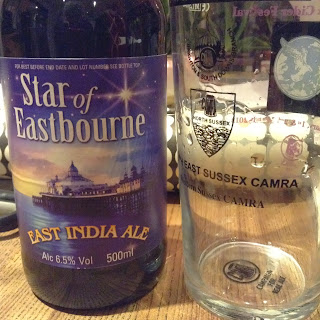 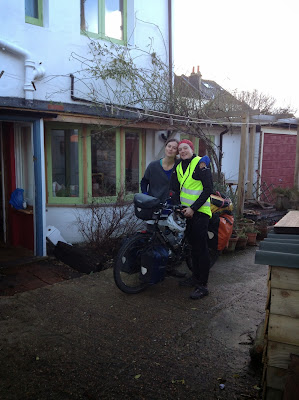 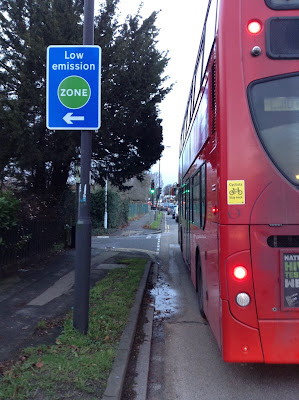 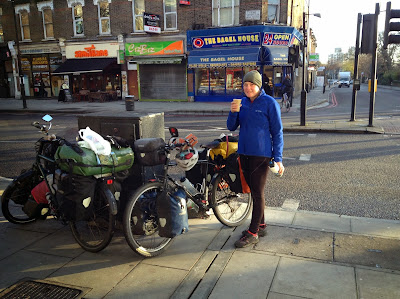 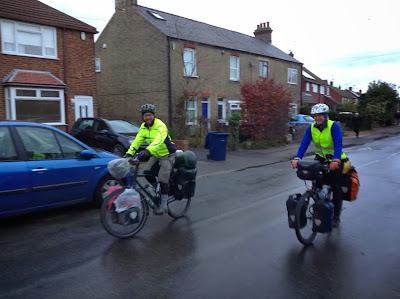 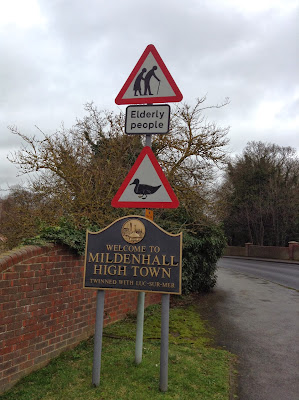 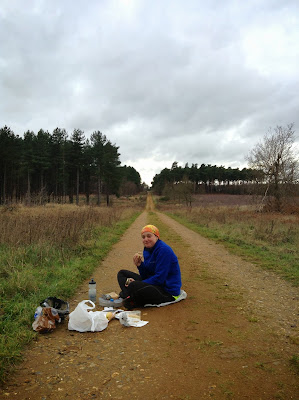 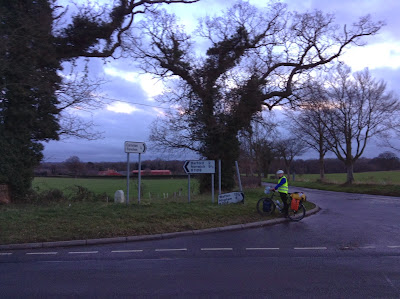 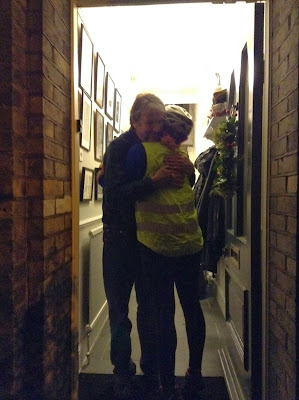 Posted by Julian Bloomer at 16:04 No comments: 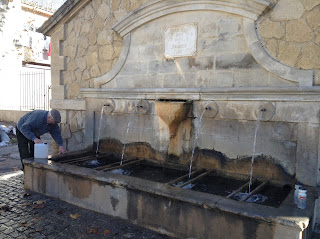 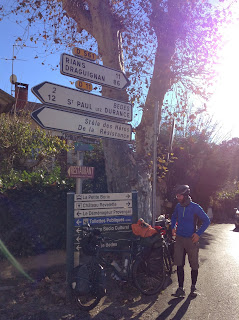 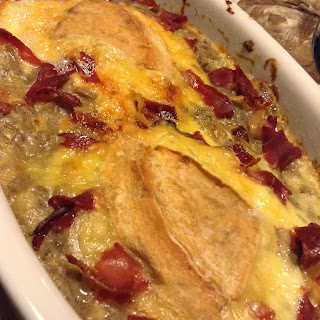 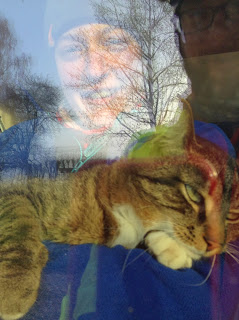 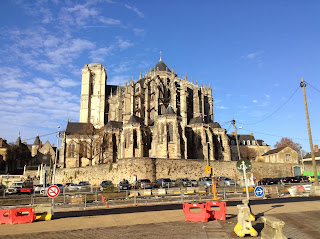 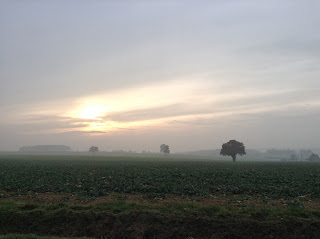 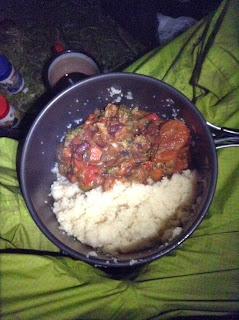 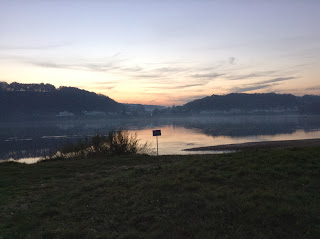 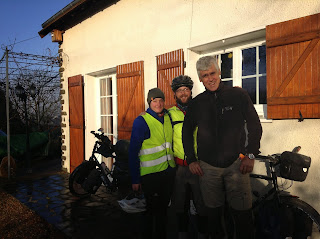 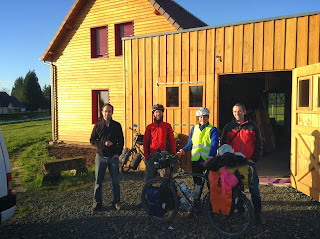 Posted by Julian Bloomer at 15:27 No comments: 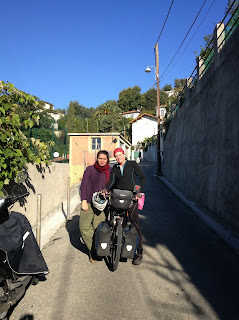 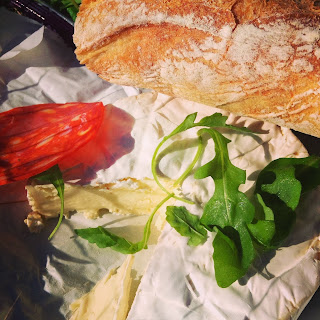 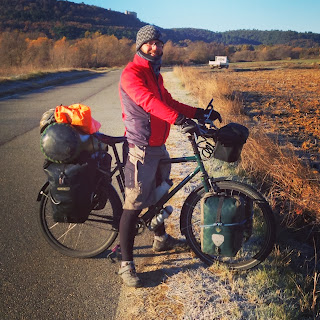 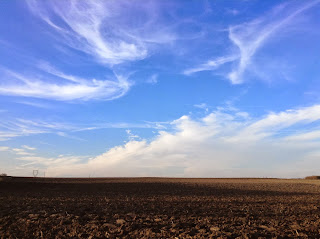 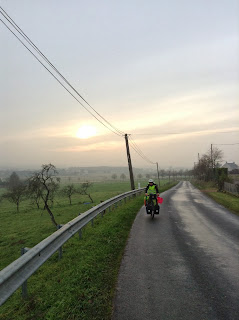 After our daily drenching in Italy that forced us to buy some new and improved winter riding gear in Genoa before coming through France, it hasn't rained since. Three weeks of cold but generally blue skies have seen us cover the 1600 km from Provence over to south western France and then an inland route up via Agen, Bergerac, Angouleme and Le Mans. Tomorrow afternoon we hope to reach Rouen and Dieppe on Tuesday where we will board a ferry for a four hour return to the Pretanic Isles at New Haven.

Following some occasional nights of rather chilly camping in southern France we relied on the amazing hospitality of France's warmshowers hosts to get us home without loss of frostbitten limbs. These evenings of wonderful food, wine and crackling fires have been really memorable. Most impressive of all, although not that surprising perhaps from a cycling hospitality network, has been a generally very active commitment to a wide range of ecological issues including organic farming and alternative energy supplies. Frequently the food we ate came from the garden outside and our hot water from solar panels whilst reminiscing over Jose Bove's attack on McDonald's over a decade ago. Veteran bicycle tourers who have crossed continents (including two families with young children) and others who cycle within their city, along with parents of pedalling travellers made our final weeks on mainland Europe a warm and wonderful experience.