Happy New Year from El Salvador! Border crossings are becoming an almost daily occurence lately, having pedalled through southern Honduras after Nicaragua and following a quick foray across eastern El Salvador we'll cross into the western highlands of Honduras. Christmas was spent in the southern Honduran city of Choluteca, where Ellie nursed a throat infection for a couple of days and we got in our full quota of TV for the coming year in one weekend. Christmas lunch was a mountain of chow mein and fried noddles from the only person in town not celebrating Christmas and open for business. At midnight on Christmas eve, Choluteca rocked with explosions as hundreds of homemade fireworks were set alright in the streets. In fact they've been blasting away all week and I've been waiting to see someone drop a cigarette into the stacks of fireworks they're selling at the side of the road.
Crossing the border yesterday between Honduras and El Salvador at hot and dusty El Amatillo, we headed for the bustling market town of Santa Rosa de Lima before turning north into the Morazon department and the mountains. Tomorrow morning we'll finish the 20km climb to Perquin, a town that was one of  the strongholds of the FMLN guerillas during the civil war in the 1980s. We've found people very friendly as usual and today the police drove past as we were climbing up to Osicala and then reversed back with the lights flashing to ask us about the trip. Better than my last encounter with a Honduran policeman yesterday who was adamant I should be giving him a late Christmas present.

58. Trying to fletcherise in Nicaragua

We´ve spent the past ten days meandering up through western Nicaragua. Off the main roads, the pace of traffic has slowed down, with less cars, more bicycles, horses and ox-carts trundling along beside us. The rainy days of Costa Rica and Panama are behind us and we´re back camping under the filling moon. I´ve lots to write but I´m also hungry and tomorrow we leave for the Honduras border, so instead I´ll cheat and cut and paste a poem by the national bard, Rubén Darío, founder of Spanish-American literary movement known as modernismo in the late 19th century. The poem was a reaction to the involvement of the United States in the separation of Panama and Colombia that subsequently allowed the US to construct the Panama canal and retain jurisdiction over the Canal Zone until the last decade.
To Roosevelt by Rubén Darío (translated by L. Kemp)

The voice that would reach you, Hunter, must speak
in Biblical tones, or in the poetry of Walt Whitman.
You are primitive and modern, simple and complex;
you are one part George Washington and one part Nimrod.
You are the United States,
future invader of our naive America
with its Indian blood, an America
that still prays to Christ and still speaks Spanish.

You are strong, proud model of your race;
you are cultured and able; you oppose Tolstoy.
You are an Alexander-Nebuchadnezzar,
breaking horses and murdering tigers.
(You are a Professor of Energy,
as current lunatics say).

You think that life is a fire,
that progress is an irruption,
that the future is wherever
your bullet strikes.
No.

The United States is grand and powerful.
Whenever it trembles, a profound shudder
runs down the enormous backbone of the Andes.
If it shouts, the sound is like the roar of a lion.
And Hugo said to Grant: "The stars are yours."
(The dawning sun of the Argentine barely shines;
the star of Chile is rising..) A wealthy country,
joining the cult of Mammon to the cult of Hercules;
while Liberty, lighting the path
to easy conquest, raises her torch in New York.

But our own America, which has had poets
since the ancient times of Nezahualcóyolt;
which preserved the footprint of great Bacchus,
and learned the Panic alphabet once,
and consulted the stars; which also knew Atlantic
(whose name comes ringing down to us in Plato)
and has lived, since the earliest moments of its life,
in light, in fire, in fragrance, and in love--
the America of Moctezuma and Atahualpa,
the aromatic America of Columbus,
Catholic America, Spanish America,
the America where noble Cuauthémoc said:
"I am not in a bed of roses"--our America,
trembling with hurricanes, trembling with Love:
O men with Saxon eyes and barbarous souls,
our America lives. And dreams. And loves.
And it is the daughter of the Sun. Be careful.
Long live Spanish America!
A thousand cubs of the Spanish lion are roaming free.
Roosevelt, you must become, by God's own will,
the deadly Rifleman and the dreadful Hunter
before you can clutch us in your iron claws.

And though you have everything, you are lacking one thing:
God! 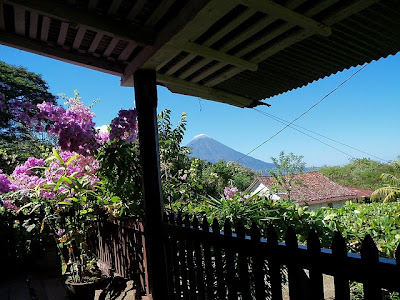 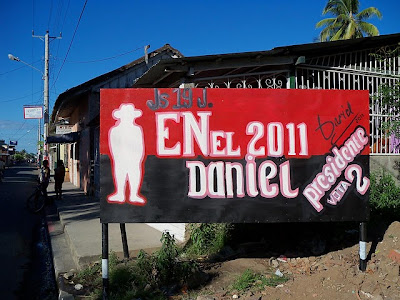 Preparations are underway for next year´s presidential election. This poster is for incumbent Daniel Ortega of the FSLN (Sandinista), most of them are. 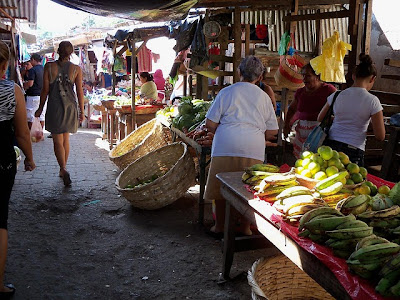 At the market in Granada 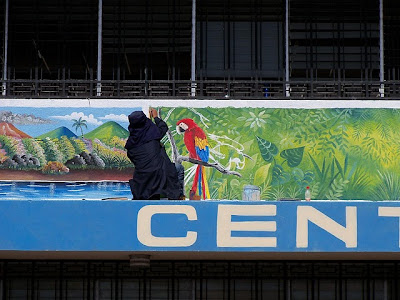 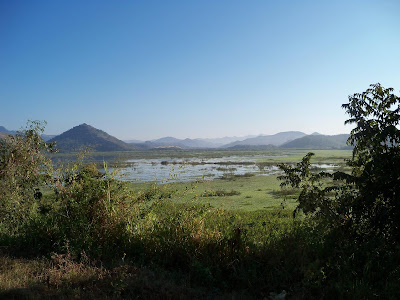 Morning time in the central highlands 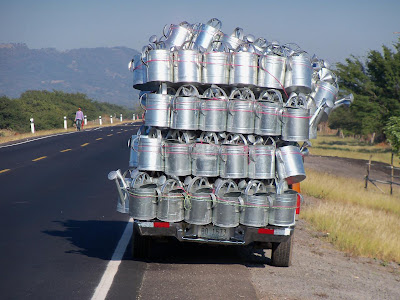 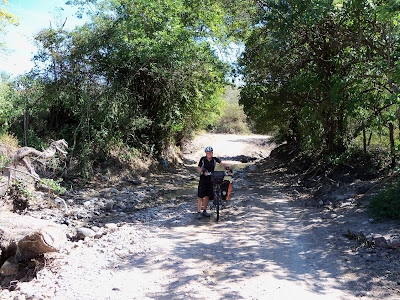 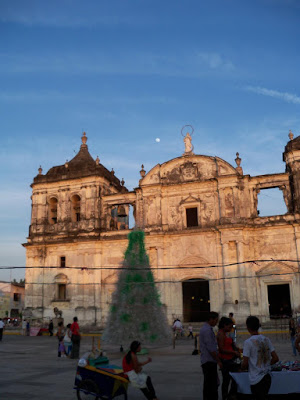 A christmas tree in front of Leon´s cathedral 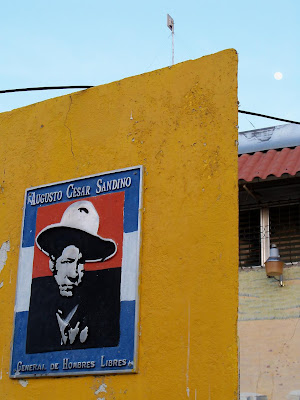 Portrait of General Sandino at the monument to the Nicaraguan revolution in Leon
Leon, Nicaragua
Pedaled: 39,146 km
Posted by Julian Bloomer at 01:00 No comments: 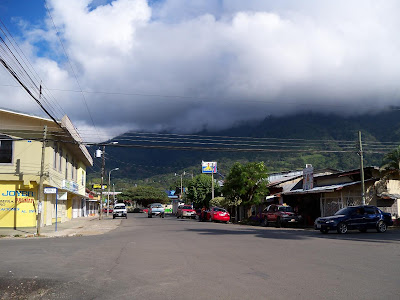 Palmar Norte
Eight days of cycling brought us north from the Paso Canoas borderpost, along the steamy Pacific coast of Costa Rica. The busy, shoulderless Pan-Americana gave way to smaller coastal roads through the Ballena national park and up to the resort of Jaco.  Much of the property on the coast has been bought up by North Americans and large billboards advertise new gated communities with a choice of either ocean or forest views.  Those engaged in the tourist trade are gearing up for the holidays when wealthy Josefinos and foreigners descend on Costa Rica's coast. Others, who live in the wooden shacks on the floodplains on the periphery of these resorts were still cleaning up the damage that had been caused a month ago when the tailend of Hurricane Tomas resulted in severe flooding and a declared state of national emergency. Hospitality at tico firestations has been as exemplary as their Panamanian counterparts and we were always able to pitch our tent, often amid the relief supplies that had been sent in for the floods. 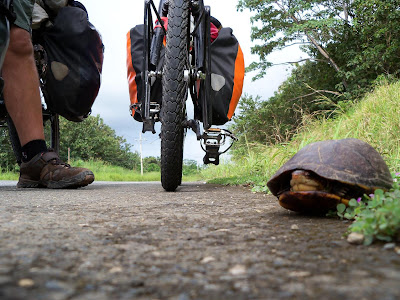 Racing the tortoise
Before continuing up to Guanacaste province and the border with Nicaragua, we take a detour on some steep gravel roads up to the cooler heights of Monteverde on the westward side of the Cordillera de Tilaran, home to a Quaker settlement since the 1950s when they moved from Alabama to avoid being conscripted to fight in the Korean War. The area is also home the Monteverde Cloudforest Preserve, a ten and a half thousand hectare reserve of tropical rainforest of immense biological diversity. 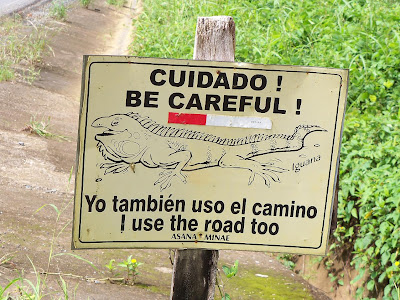 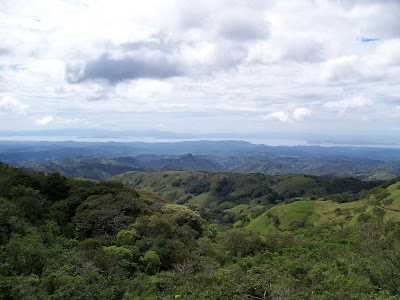 Climbing up to Santa Elena at 1400 metres 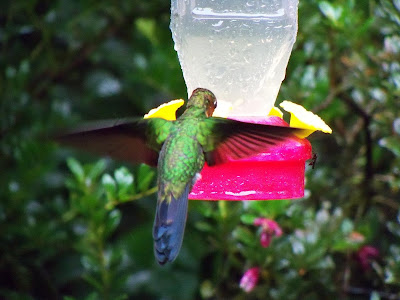