The last few days in France were spent continuing along the Chemin St. Jacques, ending up at St. Jean Pied de Port. From here pilgrims usually continue across the Pyrennees via Roncevalles to Pamploma before taking an inland and less undulating route to Santiago. Wanting to travel along the northern coast of Spain, however, I took a right hand turn and came over the mountains to Euskadi, or the Basque country. In fact, I was already in the French Basque region before crossing over, so there is a cultural buffer zone when crossing through from France to Spain. 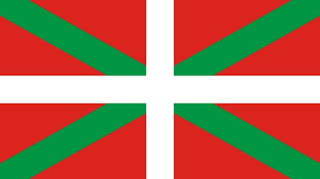 The Ikurriña, the Basque flag.

The symbols, flags, and murals calling for independence and promoting Euskal, the Basque language, are everywhere. I had taken a small road through the mountains when I was heading for San Sebastian (Donostia in Basque) and I ended up sitting in the little square of Goizueta, a small village about 30 km in the hills above San Sebastian in between a couple of biblical rain storms. People were polite and some passed greetings when I was making up lunch, but the surroundings and the overt displays of nationalism, including some flags for ETA, the Basque paramilitary group, were more reminiscent for me of the Balkans, or northern Ireland in the past, and hard to grasp the transition that I had made in such a short distance from southern France. There is, of course, a historically close association between the political conflict in northern Ireland and Euskadi and wandering around last night I came across an Irish bar with the decor theme being posters from both sides of the fence, spanning the past 30 years. Very interesting, and the pint of Guinness was good too.
Donostia, Euskadi
Trip distance: 2032km
Posted by Julian Bloomer at 12:08