6: On the banks of Fortress Europe 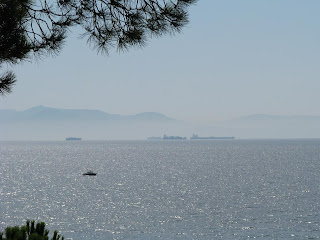 Looking across the Strait of Gibraltar towards Morocco

"You're looking a bit thin", my mother announced with slight disapproval, several sentences into our first conversation in several weeks last night. There was a short pause, followed by, "So you're going to Africa then?"
Despite several enriching visits to various regions of the continent over the past four decades, her voice retains the fears of a generation that has been bombarded by a consistently negative image of the African continent. The very name inspiring images of excrutiating poverty, 'tribal' violence, and life-threatening diseases. While in some parts such factors do have a devastating impact on many people's lives, rarely are the deeper historical root causes of these factors analysed sufficiently well, or presented clearly by the Western media. Furthermore, rare is the positive image of Africa that is presented to us. Debates about whether external factors (the legacy of colonialism, for example, or the role of Western-biased trade agreements) or internal factors (in the form of corruption, or bad governance, for example) have more influence over the other in shaping the continent's contining social, political, and economic woes remain controversial. However, behind these larger issues is a continent, countries, and peoples that, just like any other, are living their lives. As a traveler, I often think, you are arguably less susceptible to problems in many parts of Africa than in many parts of western Europe or north America, particularly when traveling in rural areas. At this point in any discussion I usually throw in my story about the three cameras that were taken whilst I and a couple of friends were swimming along the Wild Coast in South Africa a couple of years ago, only to be returned several days later after the intervention of the community leaders and the local traditional healer. I try to imagine how the same situation would play out in other settings and I doubt I'd still be taking pictures with the camera.
My cousin Mark joined me from Colorado for the last two weeks of the European leg, from Lisbon over to southern Spain. We crossed the arid landscapes of southern Portugal and Andalucia, stopping off at a number of cities enroute, including Sevilla and Cadiz, catching a famous biennial flamenco festival in the former. A number of factors led to a decision to change my crossing point from Malaga to Tarifa, where rather than crossing over to the Spanish enclave of Melilla, I'll now cross to Tangier. The principal reason for the change of plan is to allow me to pass through Morocco's capital, Rabat, to collect a visa for Mauritania, as there are currently mixed reports about being able to get a visa at the border. And if you look at a map of the region, you really don't want to be told you have to go back to Rabat for a visa. So having gotten my wheels trued, bought enough spares to build an additional bicycle, and been presented with a proper pair of new cycling shoes from Mark, as well as stocking enough peanut butter to run a small plane, I'm ready for tomorrow morning's 35-minute high-speed ferry crossing to Tangier and the next leg of the journey.
Hasta Luego!
Tarifa, Spain
Trip distance: 4331 km
Posted by Julian Bloomer at 16:36