46. The world comes to Tiquipaya

As I cycled into Cochabamba two and half weeks ago, I imagined that Corazon Grande, the girl's home where I was going to spend some time at, would be in the middle of one of the dusty and ramshackle districts that lay perched up on heavily eroded slopes overlooking the city. Instead, two days later I found myself surrounded by green fields and cows and contemplating the massive peaks of Parque Nacional Tunari by day and the stars and chirping pond fauna by night. Corazon Grande, home to nineteen wonderful girls between the ages of four and fifteen, was actually situated down a peaceful lane near the village of Tiquipaya (pronounced tiki-pie-ya), 13 kilometres from the centre of Cochabamba. The past couple of weeks have been happily spent fixing miniature bicycles (sometimes successfully) and peeling enormous quantities of spuds. 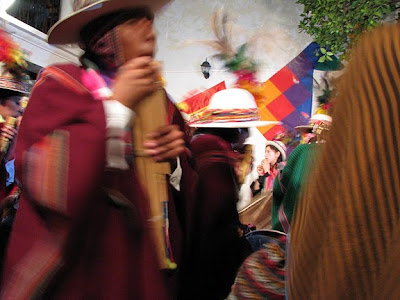 Los Masis performing in Sucre
At just over 2500 metres, Cochabamba lies midway between the Amazon lowlands and the antiplano and its amicable climate and the surrounding fertile valleys have earned the region titles such as the breadbasket of Bolivia and the city of eternal spring. In the beginning of the 21st century the city came into the world media's spotlight when a series of protests took place over the recently privatised water system and subsequent tariff increases, the result of Bolivia's attempts to comply with the World Bank's programmes of structural adjustment that imposed neoliberal provisions in order for countries to be eligible for loans from the organisation. The tariff increases in Cochabamba would mean household monthly water bills were US$20 or more - in a country where at the time the minimum wage was less than US$70 per month. 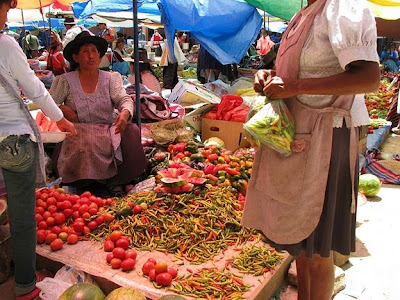 Market in Tarabuco
For three months in early 2000, demonstrators and government authorities faced a stand-off that flared into increasingly violent confrontations.  Ultimately, the Aguas del Tunari consortium, including international firms such as Edison and Bechtel were forced to withdraw from Cochabamba and the water works were handed over to La Coordinadora, a locally formed group of engineers, environmentalists and irrigation farmers. In the following years, the Cochabamba Water Wars were held up as an example of successful resistance to corporate greed and the neoliberal policies being enforced by the World Bank and the International Monetary Fund. A decade on, however, and many Cochabamba residents are still plagued by lack of access to water. By the end of 2005, half of the 600,000 residents in the city still remained without water, and many of the others only had sporadic access of a few hours per day. 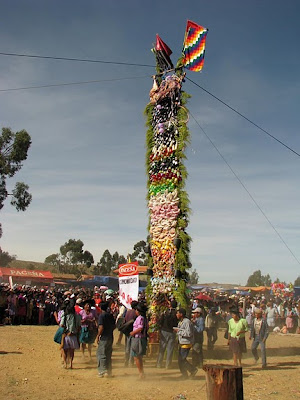 Pujllay festival in Tarabuco
In a few day's time Cochabamba will again come into the world's media focus, as the Worlds People's Conference on Climate Change and the Rights of Mother Earth opens in the new Hotel Regina here in Tiquipaya village. The new self-styled environmentalist, President Evo Morales, called the conference after the failure of the Copenhagen summit and included among its ambitious goals are a new UN charter of rights and an action plan to establish an international climate justice tribunal, as well as the world's largest referendum, with up to 2 billion people being asked to vote on ways out of the climate crisis. No mention though presumably of Morale's prioritisation of natural resource extraction, especially oil, gas and lithium, to develop Bolivia's economy. Nor of the environmental effects that extended coca leaf production is having in the Andean region as the prime driver of deforestation within cloud forests and lowland jungle. Although the meeting has no direct bearing on UN climate talks being conducted by 192 governments, there will be at least 90 government delegations attending, as well as various left leaning intellectuals including Uruguayan writer Eduardo Galleano, US linguist Noam Chomsky, Naomi Klein, movie director James Cameron and actors Danny Glover, Robert Redford and Susan Sarandon. All gathering along with 15,000 indigenous activists, local NGOs and grassroots organisations. All coming here to Tiquipaya. So Rocinante will kept out to pasture for a another ten days or so. 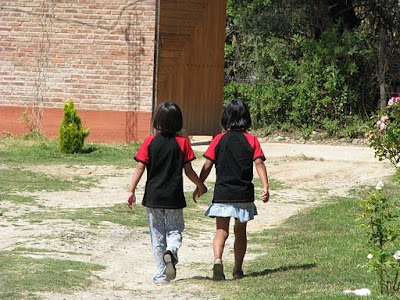 I`m so glad to hear that Cochabamba is treating you so well!! I am already missing so much about Bolivia, but being on the move is a nice traet for me. Super envious that you get to be there for the climate forum!! Hope it`s glorious. Best from Buenos Aires!!
Molly

Kurwa!! I am getin' rotten here!! Take care Julian and see you on the road!! Hasta la vista baby!

Howdy Julian,
I'm friends with Justine Faranof, and I'm thinking of taking a bike trip in the US from Virginia to Maine after I graduate law school. I've been reading a lot about cross-country trips, and I've heard that lodging can be a problem sometimes. If you get up to El Salvador, let me know. I've got lots of family there, and my dad would be more than willing to help out. My email is ed_sped2@hotmail.com.
Happy travels!
-Ed Palomo