52. Two years on in Colombia

The thrill that accompanies an international border crossing was beginning to subside when one of three Colombian policemen motioned me over to the side of the road, just north of the bordertown of Ipiales. More closely resembling a small artillery unit in appearance than your average bobbies on the beat, the burly olive drab clad officers cracked some jokes about smuggling contraband on bicycles before offering me some of the loot that they were about to help themselves to from the rear of a deeply-dented Chevrolet that was overloaded with cheaper Ecuadorian foodstuffs. I declined the offer of some smuggled sardines whilst looking at the expressionless face of the driver who was clearly used to hassle from the police and factored in their petty theft to his profit and loss calculations. 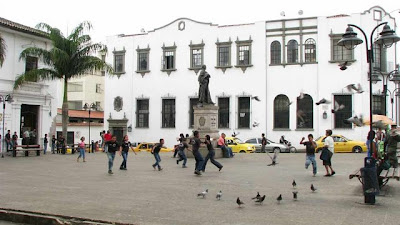 Pigeon chasing Popayan
The Pan-American highway winds its way northwards over the verdant and unrelenting landscape of the Cordillera Central, rising and falling from chilly 3000-metre passes to the humid, soporific, fertile valleys at 500 metres and back again. I managed to time my arrival in Colombia to coincide with some unseasonally wet weather. A minor inconvenience for me but which I later learned has led to at least fifty deaths throughout the country and a lot of homes being damaged and crops destroyed. I passed through Pasto and went on to the small colonial city of Popayan for a three-day break off the saddle. Whenever I have been near a cable TV since arriving in South America ten months ago, Colombia's ministry of tourism continuously reminded me "that the only risk is wanting to stay", backed up with a beautiful montage of the country's diverse landscapes designed to rebrand the country's long tarnished image. 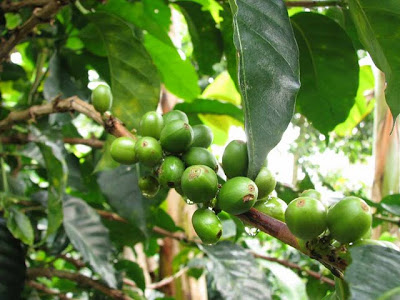 Coffee
Apart from the odd military patrol and the friendly sentries guarding the bridges from sabotage along the Pan-American highway, there is little sense to the passing cyclist of the war that is still being waged amongst the confusing array of parties that includes the national security forces, left-wing guerrilla groups such as FARC and the ELN and right-wing paramilitaries - all deeply divided ideologically yet united with the underlying common denominator of profiteering from coca leaf production and the cocaine trade. As long as the eager party-goers in wealthier nations continue to fork out silly sums of cash for snorting some powder off the top of a toilet, countries like Colombia and Mexico will continue to be pulled apart with the violence, corruption and political instability that accompanies the illegal drugs trade. Caught in the middle are the primarily rural populations who attempt to carry on living amidst the different factions. In yesterday's Herald Scotland, Julia Horton details the impact of a recent landmine explosion on one man's life in her article on the "Human cost of Colombia's cocaine wars". 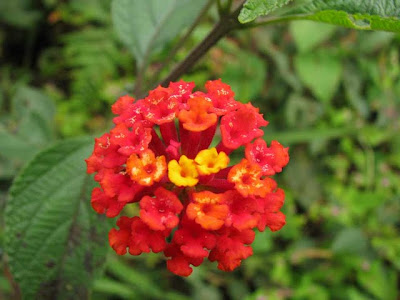 Many Colombians I have met over the past couple of weeks are justifiably happy with the improved security that they have experienced in the last decade. Beginning in the mid-90s with a decline in the corruptive power and stranglehold of the Medellin and Cali drug cartels and more recently with military successes against the largest guerrilla organisation, FARC, and with increased military and financial support from the USA under Plan Colombia, the recent administrations have managed to greatly reduce the levels of violence that were being experienced during the previous years. Despite a lack of success in curbing cocaine production through aggressive tactics such as aerial fumigation - a tactic that often leaves rural producers short not just of a coca harvest but also food supplies when their other crops are damaged in the process and provides them with no alternative livelihood strategy to turn to - USA's Plan Colombia has at least, as a somewhat unintended byproduct, been successful in supporting Colombia's security forces and reducing overall violence, although the security forces' attention is disproportionately focused on the left-wing guerrillas rather than the demobilised paramilitaries who historically have been tolerated by and covertly supported by the security forces and continue to "operate in vast areas of Colombia and are responsible for massacres, killings, forced displacement, rape, and extortion, as well as drug trafficking. Their targets have included human rights defenders, trade unionists, and ordinary citizens who speak out and resist involvement in criminal activity",  according to Human Rights Watch. 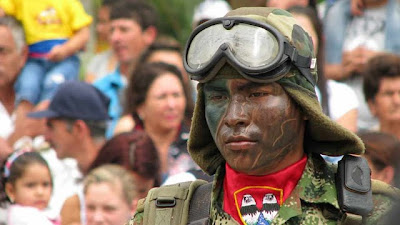 Independence day, Salento
Of course, all this is quite far from the Colombia I experienced.  And the ministry of tourism is right, probably the only risk is wanting to stay. I had a break in quaint and tourist haunted Salento, in the middle of the coffee zone where I stayed on a coffee farm for a few nights and witnessed the sombre  military parades for Colombia's 200 years of independence celebrations. In a one finger salute to the bicentennial celebrations, indigenous rights groups organised marches that occurred the following day in Bogota, protesting against the US-Colombia military pacts, the continued harmful exploitation of their lands and resources  and demanding to be effectively represented in the political structure.
From Salento I covered the remaining 250 km to Medellin through more mountainous and spectacular scenery and now I am staying with Seamus, an old friend from Wickla, who will mind Rocinante while I take a two month cycling sabbatical and fly back to Europe, before returning to Colombia to continue northwards. Medellin is a city that has undergone a radical rebirth in recent years since the infamous days of the world's most famous drug-lord, Pablo Escobar, who ran the hugely powerful Medellin drug cartel, who at their height were estimated to be trafficking 15 tons of cocaine per day into the USA. Escobar is still a very controversial figure in terms of the veneration he is held with by many for his contributions to housing projects, church construction and sports venues in the poor barrios of Medellin, as well as being remembered for a cultivating a ruthlessly violent culture in his pursuit for dominance of the extremely lucrative cocaine trade. By the end of the 1980s the ongoing turf wars between different drug cartels led to the city becoming known as the most violent city in the world. In 1991 alone, 6500 people were murdered in the city. Finally, however, by the early 1990s pressure was on the Colombian government both internally and externally to move against the drug cartels and in 1993 Escobar was killed in a shoot-out with police in Medellin. Over the following years the murder rates subsided by over 80% and under several different visionary administrations Medellin went through a physical and cultural rebirth that has seen the city being transformed into a icon of urban and social development and is frequently used as a model by planners and administrations in other cities troubled by gang warfare and drug trafficking. 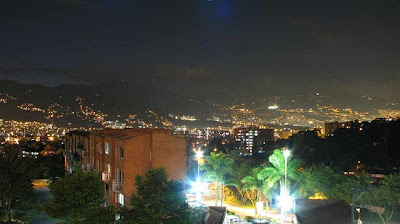 Medellin at night
Social transformation, however, ain't quick and easy. In 2008 the former paramilitary leader, Don Berna, was extradicted to the USA to face charges of money laundering and drug trafficking, a power vacuum was left that has resulted in a rapid escalation in violence in the city's poorer barrios since, with soaring murder rates that doubled in 2009 to 2,186 and has already seen over 1000 killed in the first few months of this year, in a city of 3.5 million people. After getting a taste of Saturday nightlife in the vibrant and affluent barrio of El Poblado on Saturday night, we headed out on Sunday afternoon and took a ride on the metro and new cable car to an ecological park above the city where we met many Colombians making their annual visit home from the US or Europe and who love to hear their city and country of birth being praised. The cable car passed over the barrio of Santo Domingo and one of the stops is at the new Spain Library, a dramatic piece of architecture that is part of the city's plan to invest "the greatest amount of resources, of the highest quality and aesthetic excellence in the poorest and most violent parts of the city" according to Angela Sanchez, with a specific focus on education. While there's still a great sense of hope it's also obvious that Medellin's past will continue to haunt it and for the unemployed youth in the poor communes on the hillsides above the city, involvement in la violencia and the control of the drugs trade represents one of a very limited number of options available for them to pursue.

Another well-written and informative blog Julian. It has been a pleasure to follow your progress through Africa and beyond.
Thank you.