Crashing into the Malaysian mainland at Butterworth pier, we disembarked from our hastily docked ferry whose captain had sent Julian and Rocinante and several other dozing passengers sprawling across the deck. We soon found Highway 1 and almost as quickly lost it again. Another few kilometres circumnavigating Butterworth's industrial zone and finally we found Highway 1 again and rode southeast towards Taiping. A late start to the day and a desire to make some forward momentum meant we decided to try the highway rather than the quieter but longer backroads. We soon discovered that the old Malaysian highways that parallel the fast new motorways, have plenty of gaping holes and the fast traffic had us concentrating hard for the first 30 kilometres. After this the road improved and the traffic lessened as we continued on towards the former tin-mining centre of Taiping. This part of the country receives a very soggy average annual rainfall of about four metres (double the volume of the Wicklow hills). The night markets were in full swing as we arrived into the city just after dusk and dinner was Chinese-Malay fare surrounded by three-generation families happily slurping and burping their way through large quantities of rice and noodles. 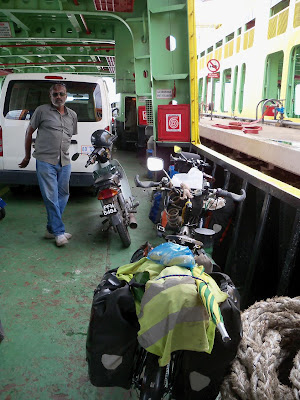 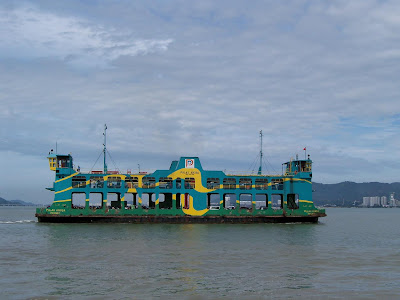 The next day as we crossed a small pass between Taiping and the royal town of Kuala Kangsar, Ellie appeared at the summit with another cyclist in tow - Swiss Rene. The Malay penninsula is a funnel for peddlers who have drifted down from various scattered regions to the north and like others we met, Rene had crossed to Asia overland on the trans-Siberian railway before he cycled south from Siberia through China and southeast Asia. We pulled over in the next village and ate the Malay staple, roti canai (rotis with curry sauce) while a pair of munching policemen eavesdropped on the conversation. Unlike most other countries where discussions of our journey soon descends into incredulity on the part of many interrogators, many Malaysians seem to assume from the outset that we are cycling around the world. Cars will pull up alongside with the windows down and a few swift answers later they pull off having found out where we're from and wishing us good luck. 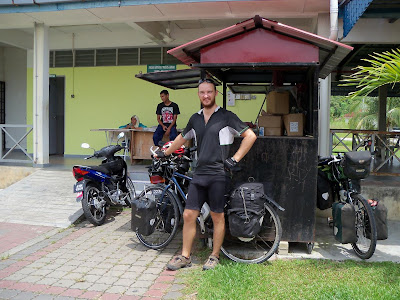 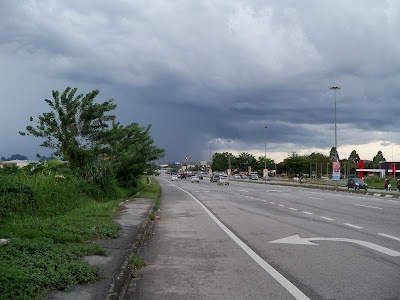 About ten kilometres from Ipoh we lost Rene again when we got separated during a rainstorm and Ellie's patched patches on her disintegrating inner tube gave up. The following day we climbed up from the steamy lowlands into Malaysia's famed Cameron Highlands where we were gradually rewarded with cooler temperatures over a 50 km climb up to about 1400 metres. We'd set off assuming that in terms of supplies, our route would be like any other over the last few months with plenty of villages to get fed in but the new road into the highlands only passes the turn-offs to a few Orang Asli (literally Original People) villages. The statistics for the eighteen recognised Orang Asli tribes in Malaysia paints a depressingly familiar picture of abuse, neglect, proselytising and abandoned livelihoods that have left these groups as the most impoverished in the country with continuing encroachment onto the lands that they subsist from. A couple of men and young boys lounged under bamboo shades, selling jars of honey on the roadside, hardly earning enough to sustain their families. After discovering there would be no food for the next twenty kilometres I flagged down a passing scooter whose jovial owner was selling fried roti and pancakes and this provided fuel for the rest of the climb. As we packed the food into our panniers a tour bus descending from the highlands stopped opposite at one of the stalls and within moments a dozen different lenses were being pointed at us at point-blank range while a loud tour guide lectured to us that the people we were sitting with were Orang Asli and they live in the jungle. More photos. Having approached us with no fear, the camera-toting domestic tourists from the capital, then nabbed a couple of the young boys from the village and sat them down for a quick snap. Two minutes later the bus pulled off and the bemused older men sat looking at us and waved us goodbye. 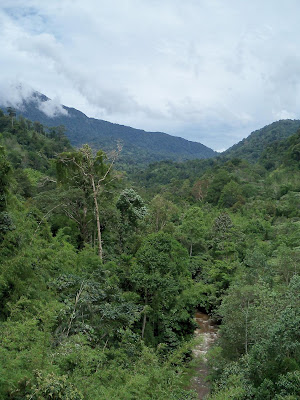 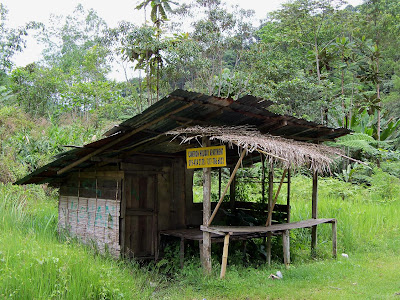 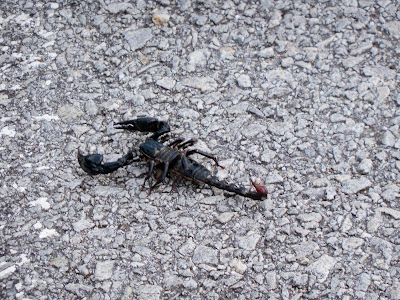 Six-inch scorpion on the climb to the highlands 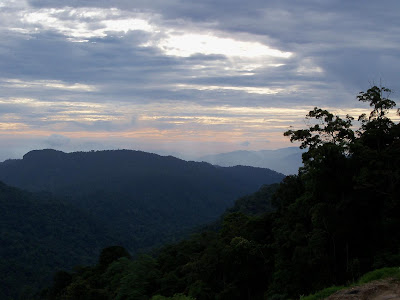 We arrived into Kampung Raja at sunset and found a bed for the night before going to the night market stalls that were laid out along the street, providing goods and services for the large population of agricultural workers who serve their time on the surrounding plantations of tea, fruit and vegetables. Since the booming 70's Malaysia's economy has depended on large numbers of foreign workers to maintain its upward growth. Many of the workers are in Malaysia illegally, having come from Indonesia and Bangladesh in particular, with promises of good pay only to become indentured servants for the murky network of recruiting agents that brings labour from these countries once a sum is paid to them. 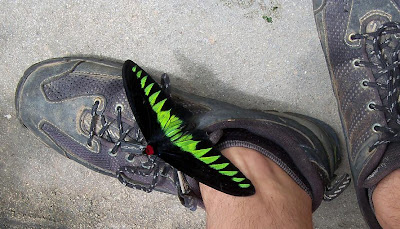 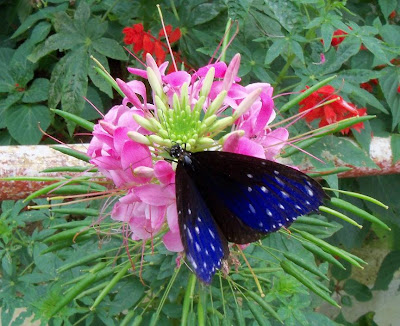 Yesterday we arrived in Tanah Rata and met another couple of bicycle tourers, including Swiss Rene who caught up after a day off in Ipoh and found us. A couple of local cycling enthusiasts, including Mr. Chong, who is recently back from a tour of China and Taiwan had already met Dutch Jet and were already fixing her her almost seized rear hub when we arrived yesterday.