105. Christmas at the Chinese consulate

Bangkok was celebrating its 230th birthday as we pedaled out of the city in the Monday morning steam bath. Traffic wasn't too bad and we were able to get onto the Bangkok-Nonthaburi canal and get beyond the city limits as we rode between the canal and the nearby Chao Phraya river that drains central Thailand before flowing into the Gulf through Bangkok.  We were presented with our first gifts of the stage - two large bottles of water from a concerned looking petrol pump attendant. 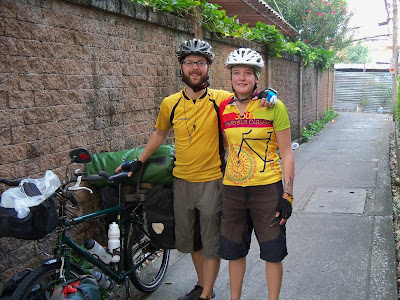 Gradually the city gave way to the rice paddies and months of successful abstinence from meat gave way to noodles with pig innards. We passed through the industrial areas that were inundated during the floods in late 2011. Extensive flood protection works are under way, including raising the walls of the canals and river banks in this terminally flat landscape, where bridges and traffic lights are the only reason to shift gears. Despite the massive economic investment and relative lack of success with such hard engineering approaches in other parts of the world, Thailand seems determined to try and build its way out of the water. 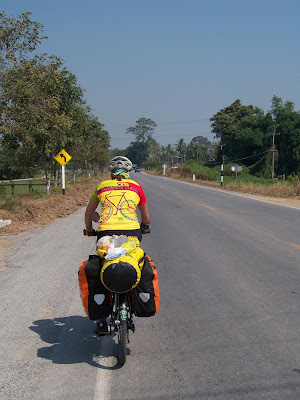 Out on the edge of the six-laned Highway 347, we were soon up in Ayutthaya, the former Siamese capital along with the more northerly Sukhothai. Leaving town the next morning Ellie spotted a large alligator-like animal posed by the roadside. The water monitor is second only in size to the Komodo dragon but just scurries back into the undergrowth as we pass. We saw many over the coming days. Thailand is a lot like tropical cycling for beginners. You have the heat but then there is always something cold to drink or an air-conditioned 7-11 to shelter in for a moment during the middle of the day. The roads, even the backroads, are generally in very good condition and there's always something to eat, generally noodles, along the road-side. Tesco supermarkets are in all the bigger towns and yet lively local markets seem to compete well with them. So the eight day's ride up from Bangkok to Lampang and our time since, is more holiday than rigorous adventure. Still we were able to make some big days and after taking a couple of days to settle back into life on a bicycle we were riding over 100 km on most days. The wind shifted erratically day by day, at times a modest headwind and at others breezing us through countryside that alternated between rice paddies and sugar cane. The temperature too dropped away as we moved inland, northwards towards the mountains, barely noticeable at first but by the time we reached Lampang night-time temperatures were already about 10 degrees less than Bangkok. Within a week a fan went from an essential item to being defunct and outdated. Occasional glimpses of weather reports on Thai channels and online show the route ahead deep in winter. About one thousand kilometres by road to our north, Kunming in Yunnan province is already near zero at night. Urumqi in the far northwest of China, our probable gateway into Kazakhstan and Central Asia is somewhere in the minus 20s. 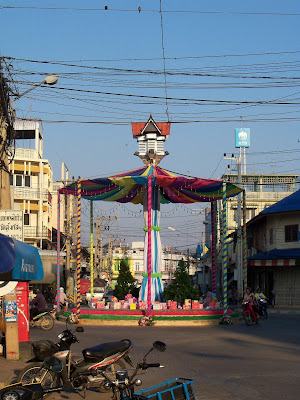 Our favourite section was when the hundreds of kilometres of fast but flat land gave way to the gentle rolling and teak-covered hills north of Sukhothai. The waves and hellos multiplied and more gifts - two wonderfully large papayas provided yet more ballast for the upward slopes. 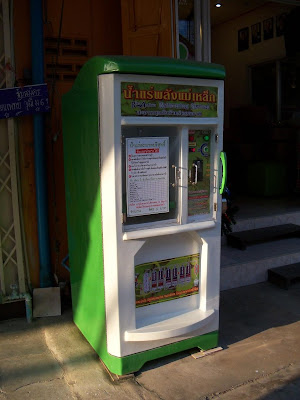 Despite the presence of water monitors and aggressive dogs, it was a bee that caused the most excitement during the week when Ellie was stung above the eye one afternoon. The next morning her eye was swollen shut and in search of some antihistamine, we trawled the aisles of the 7-11 and Tescos. Finally we found the only open pharmacy in the town and the friendly lady helped us and refilled our water bottles. 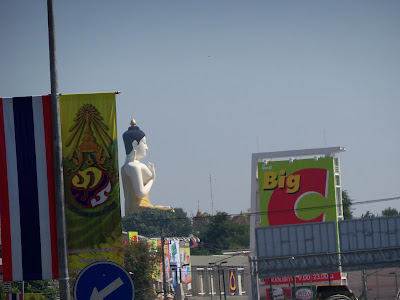 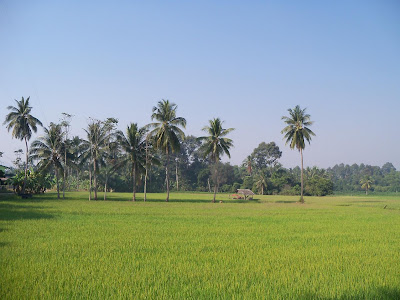 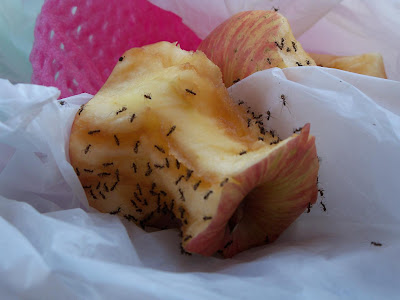 Ants get to my apple before I can 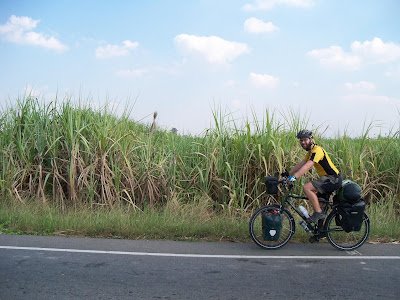 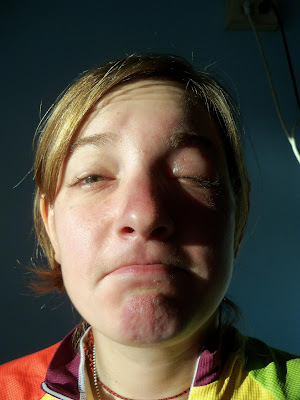 Our goal was to make Chiang Mai by Christmas but on Christmas eve we decided to stop in Lampang and on Christmas morning at 6 a.m. we took a bus for the two hour journey to Chiang Mai to apply for our Chinese visa. If anyone can rob one of the festive spirit, it is a consular officer. The smiling consular staff said she would need a couple of more pieces of paperwork, so today we returned to the embassy, submitted our applications and fingers crossed will collect our visas in a few days time. Oddly, given its fairly miniscule Christian population, Thailand gets into the holiday spirit with great fervor - not just the shops who are keen for any excuse to make sales, but also the streets fill up with night fairs, concerts and lights adorn the streets. Plastic Christmas trees melt in the broiling temperatures and shop assistants wipe their sweating brows with Santa hats. Yesterday we explored Lampang, found ourselves a bike shop there and arranged for Ellie's bike to get a new bottom bracket. Then we found a cinema screening films in English and we got to see the Hobbit. 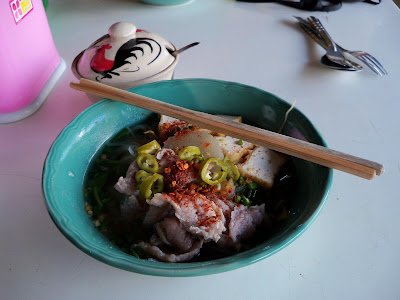 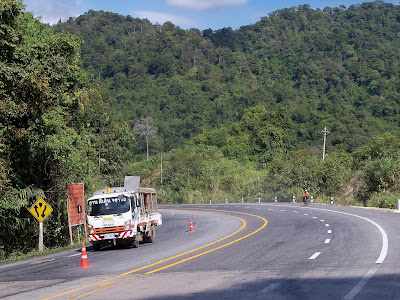 One last climb before Lampang

Many thanks for a couple of recent and very generous donations that have brought the fundraising up to 792 euro - almost exactly what we've cycled so far from Bangkok! Donations to the Peter McVerry Trust can be made on my webpage at mycharity.ie: here. Thanks again.
Posted by Julian Bloomer at 12:26