121. To the Ferghana valley: from Bishkek to Osh

Climbing into the hills above Kara Balta, the wide open expanse of the Kazakh plains stretched northwards until they blended with the sky. We set up our new abode (an MSR Mutha Hubba) under the shade of some fruit trees in a cafe just beyond the village of Sosnovka and following our meal of laghman (noodle stew) and borsch, our hosts brought out a large bowl of raspberries, as we admired and critized our new home. The climb up to the Too-Ashuu tunnel at close to 3000 metres was a long, steep one and culminated in a series of impressive switchbacks. We finished the last 14 km of the climb on our second day out from Bishkek, having camped up in the room of a jailoo (summer farm) when the heavens opened the previous afternoon. The family ushered us into the spartan room, completely bare except for a dirty rug on the floor and the contents of a recently butchered sheep in a large cauldron. The head of the animal lay in the hallway, eyeing me vaguely. A large sheep skin was lain down and we had the place to ourselves for the rest of the day while the family built pens for the cattle, sheep and horses.

The following morning we reached the notorious Tor-Ashuu tunnel, a 3 km long Soviet-era construction that bore through the mountainside and out into the Suusamyr valley. Rain and then snow ensured we were pretty cold as we waited at the tunnel entrance for a friendly truck to bring us through to the other side. With a gentle uphill incline, cyclists are usually told not to ride through the unlit, dusty passage where with little room to spare, trucks still attempt overtaking manoeuveurs. A soldier at the checkpoint took pity on us and brought us into his heated bedroom in the barracks where we thawed out with tea and central heating and ate the few bits and pieces of bread that I scavenged from a nearby wagon.

The sun was shining onto the deep green fertile grassland on the other side as we descended from the tunnel into the Suusamyr valley. Yurts lined the roadside for kilometres, all brewing kymys (fermented mare's milk) and other diary products from the grazing animals. We asked to camp in the grounds of a small clinic that served a 100 kilometre stretch of road but instead we were shown into one of the empty patient's wards, a spartan two-bed room, and allowed to sleep in the warmth. Later that evening I chatted with the ambulance driver who was very keen to ask questions about Europe and Ireland. In his gentle manner and with no common language we covered a variety of topics from crops to wages to some politics. He was nostalgic for the Soviet Union and regretted its collapse. As a tank driver in the 80s he had been stationed for two years in Vladivostock. Now he earns $100 per month driving and repairing the antique ambulance that our bikes shared the garage with for the evening. The following morning we were invited to breakfast with the several staff on bread, butter, jam and lamb and copious cups of tea. More bread and butter for the road ahead was handed to us as we headed on up to the second pass at 3200 metres. Plied with bowls of kmymys from  a Bishkek family that summers up in the hills and more food from another yurt when we dived in to avoid a rain shower we climbed the 25 km out of the valley to the summit. Fortunately the rain cleared as we neared the top and we were rewarded with a blue sky and sunset before we descended down towards Tortogul and a peaceful camping spot by the river.

The next few days we spent in the much dryer and sun-scorched landscape that circled the Tortogul reservoir before following the dammed Naryn river down into the Ferghana valley. Old railroads and highways that used to cross the ethnic Soviet republics effortlessly in the old times were all severed after independence and we rode along the Uzbek - Kyrgyz border towards Kochkor-Ata and Jalalabad. The latter, along with Ozgen and Osh, were the scene of bitter, vicious riots in 1990 and 2010, when due to the culmination of several factors such as economic decline, Uzbekistan's policy of secularisation in an otherwise religiously conservative region, and political conflict many hundreds were killed. The Ferghana valley has been a historically important crossroads for the past couple of millienia and is still an important agricultural centre in an otherwise barren landscape. The sister river of the Amu Darya, the Syr Darya, irrigates the fields with the runoff from the Kyrgyz mountains before flowing to the ever diminishing Aral Sea.

The region is still an important crossroads today for pedallers too and we've met many cyclists in the past few days and more still in Tes Guesthouse where our tent is pitched up for the past couple of nights as we gather provisions for the Pamir highway that officially begins in Osh. 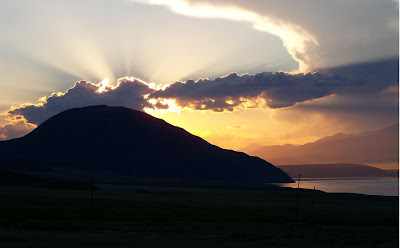 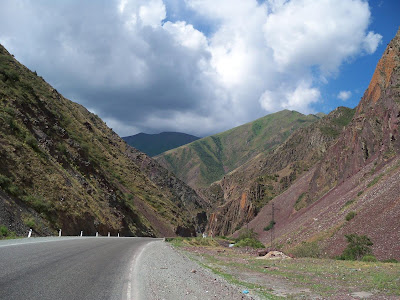 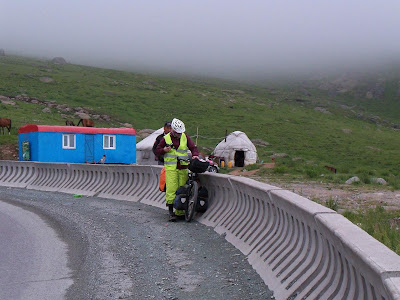 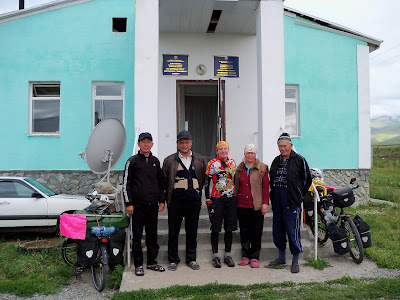 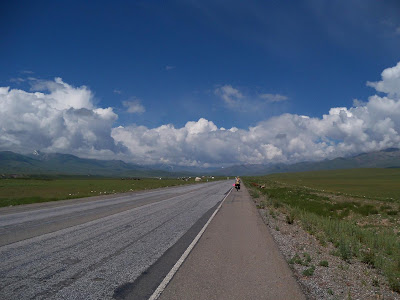 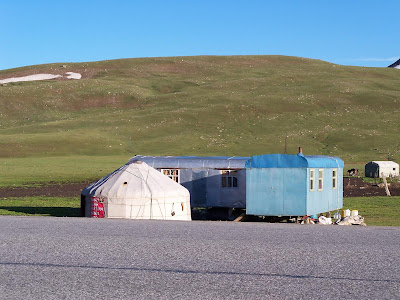 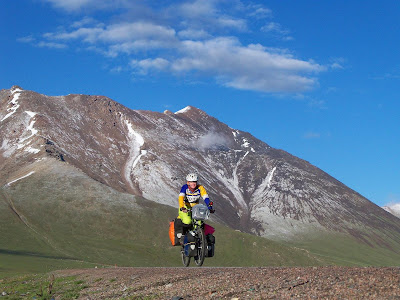 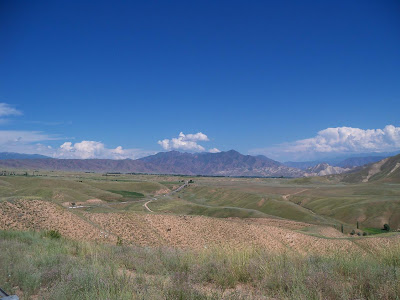 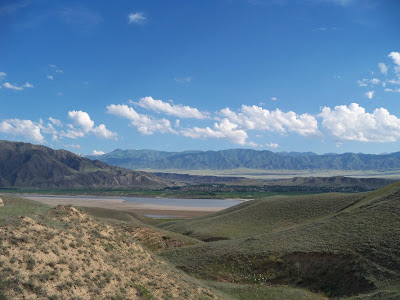 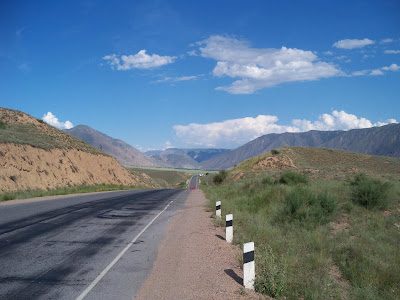 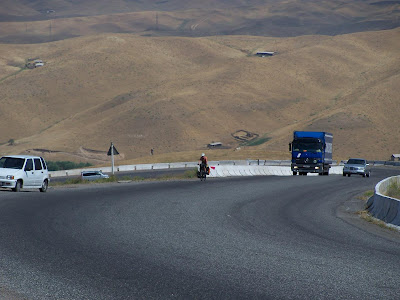