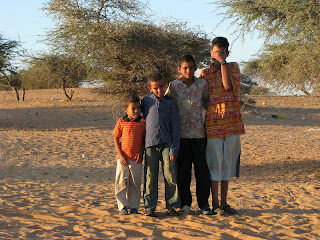 A morning audience, Mauritania
The couple of hundred kilometers south of Nouakchott, into southern Mauritanian saw a continuous shrinking in distances between settlements and a transition in landscape from desert to savannah to the fertile banks of the River Senegal. On our first night out of Nouakchott we had to leave our selection of camping site until the last glimpses of light settled in the west. Even then we found ourselves pitching our tents in sight of households on either side of us. As we cooked dinner a moonlit shadow strolled past, whistling to himself. The following morning we had a smiling audience of young boys, who stopped by on their way to school to and were fascinated by the packing of the tents and bikes. 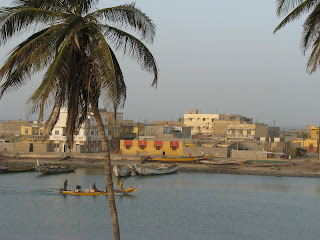 St. Louis, Senegal
In an effort to avoid the Rosso border post, Mauritania's notoriously difficult crossing point into Senegal, we opted instead to follow the 90 km piste along the river and cross over at Diama, near the old French colonial capital of French West Africa, St. Louis. After a couple of days of doing as little as possible in St. Louis, and enjoying the now freely available and reasonably priced cold beer, and funky music, we were back on the bikes heading south again through a landscape dominated by baobab and tamarind trees. Avoiding the main road south to Senegal's capital, Dakar, we chose an alternative route that looked perfectly acceptable on my Michelin 741 map of west Africa. However by midday of Tabaski, one of the largest Muslim festivals in the year, we found ourselves pushing our bikes along a sandy piste for almost 10 kilometres when my 'secondary road' deteriorated into a single path of deep sand. In our haste to reach Mbour, a fishing town 80 km southeast of Dakar, we ended up refusing many offers of hospitality to join families as they ate mutton, the traditional meat for the day. 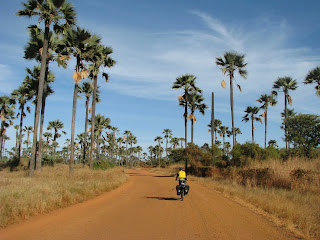 Tall trees, Senegal
Leaving our bikes in Mbour we headed into Dakar for the day to collect some visas and have a look around town. The city was still in a lazy stupor after the festivities of Tabaski and failed to live up in any way whatsoever to its reputation as a potentially hostile and hassle-filled place. Back in Mbour we had two options to continue around the coast to The Gambia. The first was to take the busy main road via Kaolack. The second was to hire a pirogue and catch a lift across the Saloum Delta. Once deposited on Toubakouta's muddy shores we would be just a 50 km ride from Banjul, Gambia's capital. Still wearied from the journey down and the Great Push of Tabaski, there was no contest as to which way we would go.

Four hours into what was meant to be a three hour voyage across the mangrove-lined Saloum Delta, all of those aboard, at least all the paying passengers, were wondering why we had chosen the pirogue option. Until an hour after departure it had all gone rather smoothly. The tense negotiations with the mafia-like pirogue owners had whittled the sum down from astronomic to acceptable at the small beach in the village of Ndangane. Half an hour out we were passed by a rather well-equipped boat ferrying other tourists through the delta. The tourists were sporting lifejackets and had a shaded tarpaulin overhead. In contrast, our barefooted crew, the youngest two of whom were aged 11 and 9, had set off on our adventure with just their t-shirts and shorts and the best we could hope for in the event of an accident was to use the inner tubes from the bikes as lifebelts. The two boys were the apprentices of our early twenties looking captain who was instructing them in the rules of the trade. One of the first rules that I noticed him casually pointing out to the 11-year old, was not to hold his lighted cigarette too close to the petrol tank that he was hooking up to the engine. One hour into our journey and everything was going swimmingly well. At this point in many of my boating adventures the engine dies - and this time was no different. Bobbing silently about in the tidal creek, our captain set to work with my Swiss army knife to fix something with the engine. For the next few hours we crept slowly towards Toubakouta, every so often the engine giving up and then being brought back to life after more work with the penknife and swearing at the engine. Occasionally progress stopped completely when we got stuck on sandbanks. Seven hours after our departure we arrived in the little village of Toubakouta, relieved to be off the boat and back on the bikes. Concerned about the fate of the crew who were turning around to venture back to Ndangane during the night, the 11-year old replied that yes, it was dangerous to travel through the delta at night, but it would be ok.

The border formalities from Senegal into Gambia were painless. For the first time since leaving Ireland in July I'm traveling through a country where English is an official language. I continued to greet people in French though. Our passing through villages continued to the shrill cries of toubab from children. Arriving at the ferry point at Barra it appeared that most of Banjul's population was attempting to return across the River Gambia to the city after the Tabaski break. Finally making it onto the boat, which was crammed well beyond capacity, we slowly ventured across the river to Banjul chewing on some fresh oranges.
Bakau, The Gambia
Trip distance: 8638 km
Posted by Julian Bloomer at 17:56

Hi Julian,
Weather here either frosty and cold or clammy cold. Had lunch with Margaret after the annual Nun's Cross
service. I presume the weather is warming up nicely for you. You will hit West Africa in the dry season.
Have a lively happy Christmas and New Year.
Very best wishes
Roland and Annette

Hi Julian,
Weather here spring like in temperature and drizzly. this is more the Christmas weather we're used to.
Hope you see some wildlife en-route in safety of course! More immediately, I hope you find hospitality on a regular basis.
Very best wishes,
Roland and Annette