23: "Welcome to Nigeria! What is the purpose of your mission?"

Finding a point to cross the border from Benin to Nigeria was harder than expected. Two days after leaving Abomey and riding north to the town of Save, we had wandered across a network of dirt roads, all of which we were assured led to Nigeria. A barrier lay across the track at the end of Oke Ewo village and a group of men who were lazing about under a mango tree, suddenly became animated at the sight of the cycling yovo's. The chief of the border post was summoned from his nearby thatched hut and he soon appeared, smiling in his bedraggled uniform. After telling us he didn't have an exit stamp to put in our passports, he assured us that we didn't require one when leaving Benin. We waved goodbye to Benin and, with no small amount of intrepedation, we rode down the track to a dried-out riverbed and pulled the bikes through the sand and into Nigeria. 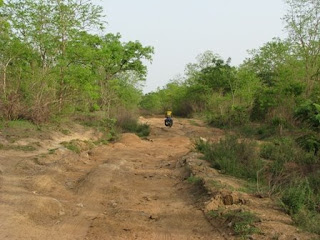 Our first road in Nigeria
After climbing a steep track on the other side of the river, we appeared in front of a smoldering fire and several apparently deserted camp-beds. After several progressively louder "hello's" an immigration officer clambered up from one of the beds and cradling his M-16 machine gun, came over to meet his new arrivals. The bad news was that he didn't have an entry stamp for our passports, but the good news was that we had crossed at the wrong village and just a couple of kilometer's away, in the village of Wasimi, was the main immigration office and more importantly the Government-approved road that would lead us further into Oyo State and eastern Nigeria. Mohammad was alone but decided that we were sufficiently important to warrant the abandoning of his post, so that he could escort us on his Chinese motorbike through the forest to Wasimi. Thirty minutes later we were presented to the chief immigration officer, a friendly and, judging by the reading material on his desk, also a devout man from Lagos. After greeting us, his opening question was whether we would like beer or water. Three hours later we emerged into the late afternoon after having been cooked a meal of rice and sardines and been given a very favourable exchange rate on the Nigerian Naira to the US dollar. Nigeria wasn't looking so bad. I had read enough about Nigeria to ensure that I approached the prospect of cycling across the country with a rather large degree of caution. Yet, like many places, the reality is that much of the trouble that gets portrayed in the international press is confined to quite specific areas. In Nigeria's case, this means the troubled oil-producing states in the Niger Delta and a number of other places where ethnic and religious conflict occasionally boil over.
The police service must surely be one of the largest employers in Nigeria. The presence of police is unlike any other country that I had passed through yet on the trip and close to the border areas, road blocks are a constant feature, appearing every few kilometers. Checkpoints employ not only many thousands of police officers, but also a myriad of other government agencies that seek to check whether vehicles are overloaded, whether drivers have their licences up-todate, and perhaps whether Nigerian's brush their teeth every morning. Requests for 'dashes', however, are generally confined to the harrassed local motorists, and my tactics for evading such requests when flagged down include keeping the officers talking - a verbal bombardment with questions about the road ahead, my love for their country, and the merits of toe-clips, before indicting that it's either too hot or too late in the day to delay, and with that pedal off down the road. 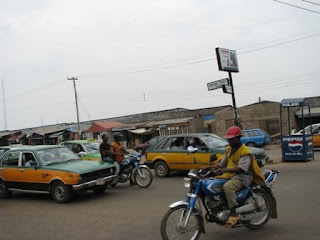 Taxis in Ilorin, Kwara State
After four days riding and camping through the picturesque countryside of Oyo State and engaging with very friendly and helpful Nigerians, we found ourselves at the end of a sandy track, late one afternoon, in the village of Malete in Kwara State. After chatting with some workers and students from the local 'youth farm', we were told that there was a Zimbabwean managing the farm and after being introduced to Hamish, we spent a couple of nights pitched up on his front lawn and enjoyed the luxuries of satellite television, fresh meat, and cold beer. The youth farm was set up to train unemployed youngsters about aspects of commercial farming and to provide them with enough skills that they could embark on their own agricultural projects upon completion.
From Malete we tried to avoid taking the lethal main roads to Abuja, and instead followed a route that led us south along the Niger River to a crossing point at Patigi. The last time I had crossed the river was early in the New Year in Bamako. The morning before we reached Patigi we were confronted by a policeman in the village of Gbugbu who seemed intent on proving that we were carting 'incriminating items' around Africa on our bicycles. After asking to be given time to eat our breakfast as we were both very hungry, he agreed, only to return shortly afterward with a colleague in tow. A call was made to the chief of police in town and it was agreed that we would have to present ourselves in front of him to prove that we were indeed tourists, as the explanation was clearly a highly suspicious one for our new escort to comprehend. Fortunately the chief of police was a relatively sensible fellow and appeared quite bemused at our presentation and after a quick interrogation about the content of our panniers we were descending towards Patigi and the Niger.
A small motorboat was waiting to depart when we reached the river and after overloading the boat with three motorbikes, two bicycles, and ten men we crossed over to the northern bank, where long-horned cattle churned up the dry earth into a thick mist of dust as they returned home from a day of grazing. We camped up in a cleared field and I managed a quick wash with a 500ml sachet of drinking water before being driven into the tent by the hordes of mosquitoes that had launched a full scale war on me.
March and April, during the period before the rains begin in earnest, are the hottest months in Nigeria and temperatures are regularly in the high 30s these days. Following a couple of punctures in my rear tube in the searing heat on the way to Patigi, it was Peter's turn the following morning to attract crowds of children as he repaired his tubes. In the village of Jima we spent an enjoyable afternoon avoiding the sun by sitting in the shade of a large mango tree and chatting with Abubakar, a retired agricultural engineer, who now stayed at home taking care of his 107-year old mother.
From Bida we spent a couple of days cycling via Lapai and Gawu to Suleja before arriving in the federal capital of Nigeria, Abuja. Following the unceremonious eviction of the pastoral communities that previously inhabited the area, the city has been built from scratch over the past thirty years. With its modern, multi-story buildings jutting skywards, alongside the nearby Aso rock, wide roads, and visible opulence, Abuja stands in stark contrast to the rest of the country. The city was conceived of as a neutral site for a federal capital that could start afresh and break away from the ethnic divisions that beleaguered other cities and regions in Nigeria. In reality, however, the model city feels rather empty, devoid of the street life that is found in other Nigerian towns. Everything doubles or triples in price inside the confines of Abuja and with reasonably priced lodgings being virtually non-existent, we're fortunate in being able to pitch our tents in the grounds of the salubrious Sheraton hotel, behind the tennis courts. 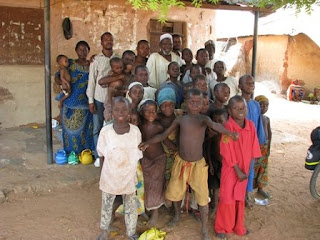 Abubakar and the kids of Jima village, Niger State

Having obtained a letter of introduction from the Irish embassy, we're now waiting for Peter's temporary passport to be issued by the Polish embassy before we can begin the visa application process for Cameroon, the Congo, and Angola. So it looks like we'll be here for a week or two at least. This is a frustrating aspect of traveling in the region, as we pass through so many places where it would be great to spend more time and yet we get cornered into hanging around large cities that hold little immediate appeal as we chase up more visas. Anyhow, for the moment there is enough to keep me occupied and we hope to get moving towards Cameroon soon before the rainy season arrives and all the dust turns to mud!

Heh Julian - did you call Mahmoud yet? He could probably provide some entertainment while you are waiting

How and where did you sleep in Nigeria?