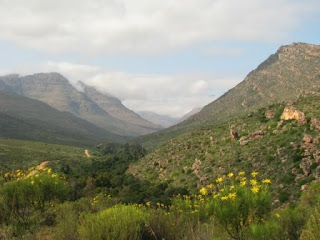 Yesterday morning I did quite a spectacular somersault off Rocinante along the main street in Stellenbosch. Over 22,000 kilometres from home and perhaps my last kilometre in Africa and it took a momentary lapse of judgement whilst jumping a curb on an unloaded Rocinante to go sprawling across the road followed by bits and pieces of the bike. Ironically I was on the way to the bike shop to get Rocinante kitted out for the next leg of the journey, so I just added a couple of new items to the bottom of my fix-it list when I handed the bike over to Leonardo the bike man.
Having failed miserably in any attempts to find passage on either a yacht or cargo ship to South America, I chucked in the towel and with one quick swipe of my credit card I enlarged my carbon footprint, cut a nice dent in my ever-dwindling financial resources, and had a plane ticket from Cape Town to Buenos Aires, Argentina. I fly out on Sunday 20th September, just under one year to the day from when I landed in Tangiers and began to run the stone-throwing gauntlet into Morocco. What a year. 22 countries, 2 tyres and a million experiences. 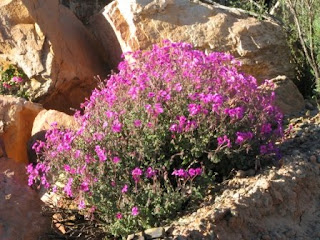 Spring flowers in the Cedarberg

After over a week in the Cedarberg mountains, I descended to the winelands of Western Cape and now I'm staying with Bennie and Elsie in Kuilsrivier, a suburb in northern Cape Town. We last met on a sandy track in southern Angola, where they saved myself and Peter with water and sandwiches as they toured the country with some friends. We kept in touch and they very generously offered to host me for the final few days in the country. After the visit to the bike doctor yesterday I bought a Spanish dictionary and phrasebook and every night I will sleep with them under my pillow and hopefully I will learn the language by osmosis.
Finally, as you may be aware, I decided a few months back to use the journey to raise money for the Dublin-based charity, the Peter McVerry Trust, which does fantastic work in supporting young homeless people. I just wanted to make it clear that if you choose to donate any money to the charity via The Slow Way Home link on the mycharity.ie website, your donation goes to the Trust immediately (and not at the end of the journey - whenever that may be!). Many thanks to those who have already contributed very generously to the fund.
To all the people at home and along the road who have made this journey be what it has been so far, a very warm thank you. 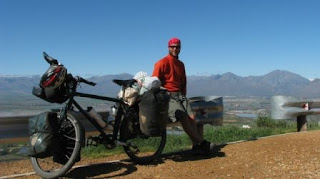 I trust that you are well and have started your journey in South America. Billy and I also hope that you got the tent, and that it will work for you. It was great meeting you, and I really wish you well for the rest of the journey. Will chat again.
Regards
Billy & Charmian Riley

Julian, I discovered this blog thanks to a post on the HUBB motorcycle forum and I must say that I have been moved and inspired by your journey. It has given me great pleasure to follow your frank and honest commentry of the adventure through Africa. May I wish you all the very best for a safe and rewarding spin through The Americas.