35. Through the Corazón de América

By 11 a.m. last Sunday I had ridden through three countries since I'd gotten out of bed and I wasn't even hungry. From Puerto Iguazu in Argentina I crossed the bridge over the River Uruguay for a sneak preview of Brazil. Fifteen kilometres through the deserted Sunday morning Brazilian city of Foz du Iguazu, however, and I was already getting an exit stamp into my passport, this time crossing the Friendship bridge into Ciudad del Este, Paraguay's second largest city. The bridge didn't have any particularly warm feelings about it that one might associate with its name. The tall sheet metal sidings that obstructed a view down the mighty Parana river, along with the city's reputation as being a den of thieves and al-Qaeda activists, set a somewhat skeptical and sombre mood for the bridge crossing. I had chosen Sunday morning to cross as the normal chaos of the city was absent with the majority of shops closed. I got stamped in at the grubby immigration booth and rolled Rocinante around the corner to find four of Paraguayan's finest standing in a line and ready for a high-noon shootout. Money exchangers prowled in the background, waiting for the lions to finish their meal so they could scavenge the remains.

I approached the youngest officer and asked him where I might find a map. A flurry of Spanish ensued, a key was produced and a young female officer was sent off to fetch me a map. One of the other officers was filling his mate cup with ice cold water and then he held it out to me, a smile breaking across his face. As I sipped through the bombilla the interrogation began. "Do you like Paraguayan girls?", the young looking one asked. "Si si", I replied as the pretty female officer returned with a complementary map of Paraguay and a note from the Division of Tourism Security about do's and don'ts. As I appeared to have broken all the rules already I threw the latter in the bin and set off in the direction of an ATM, preconceptions once again given a sound thrashing. Riding out of Ciudad del Este, asados were being prepared by the roadside and smells of roasted meat lingered in air amidst the diesel fumes. A large SUV slowed up alongside me and its blacked-out windows rolled down smoothly. "Where you from?", the smiling driver yelled. "Irlanda", I shouted as I narrowly avoided another irksome speed bump. Then getting two thumbs up and a wish of suerte from himself and his good-looking lady passenger, I received the first of many greetings in Paraguay. 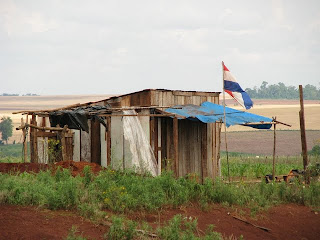 Landless people occupying soya farms
Turning south onto Route 6, I passed a number of landless peoples encampments that have occupied lands owned by the soya farmers. Paraguay has a long history of violent land conflicts and horrific human rights abuses still surround the expansion of heavily mechanised farming, primarily for soya production. All of the important theoretical debates on large-scale monocropping, genetically modified crops, and the creation and maintenance of structural social inequality, can be witnessed in the frighteningly real and raw first-hand here in Paraguay. The spread of the large-scale monocropping agribusinesses has been facilitated at an international level by lending institutions such as the World Bank, and at a national level by the government, the police and military, as well as private security companies. Evictions of landless peoples from occupied land has resulted in the killings of over one hundred people in the past twenty years of democracy, the mass burning of homes, and a violent culture of mistrust and suspicion. 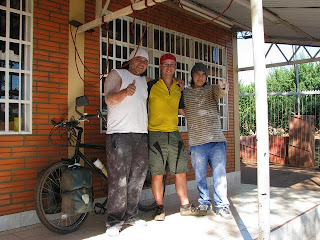 La Paz, southern Paraguay
Yet things change and there is hope. The inauguration of the current president, Fernando Lugo, in August last year marked the end of a 61-year rule by the Colorado party and yet another move to the left in a South American government. Lugo has distanced himself somewhat from the continent's current high profile leftist leaders like Chavez in Venezuela and Morales in Bolivia and kept the focus on social justice issues at home. The former bishop of San Pedro supports the peasants claims for better land distribution and represents a real sign of hope for the 30% of the rural population that has no access to land.

"Without doubt it is possible to resurrect a country like Paraguay. We are people of hope, of faith, and I won't be the one killing that hope of the people. I do believe we will resurrect this country, a country deeply drowned in misery, poverty and discrimination. Because I do believe Paraguay could be different. I do not lack faith in this flock. Where there is a scream coming from the poor people, where there is sweat, where people are shoeless, we will be there. Because in such people there is a resurrection; if that exists there, then there is resurrection for Paraguay." Fernando Lugo, current President of Paraguay, in a pre-election speech in 2008

With my Spanish still in its infancy, I lost most of what Arno was saying to me on my second night in Paraguay. One thing was clear, however, he certainly didn't favour the new president. Arno had grown up in Paraguay but had spent most of his working life in Buenos Aires, before returning to Paraguay fifteen years previously with his wife. Both now in their mid-60s, they ran a small shop that appeared to stock everything one would ever need. As I drank a carton of chocolate milk outside their shop, Arno asked about the trip and offered me a mattress for the night in one of the rooms he was still constructing on the roof of the shop. We spent the rest of the daylight hours tending to his assortment of animals and walking through his overgrown vegetable garden and mate fields. Later on, over a dinner of milenesa and empanadas, Arno spoke for hours about Paraguayan politics, the life of a farmer and how to run a shop. I understood almost nothing, but it was a great evening nonetheless. 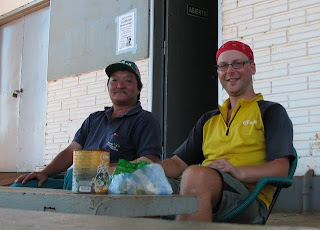 Chatting with Mario, a second generation Japanese Paraguayan
I was passing through Pirapo, a small village in southern Paraguay, when I noticed something odd - there were a lot of Japanese about. I vaguely remembered hearing something about Japanese colonies being established in Paraguay and it appeared that I had stumbled across one of them. At the petrol station I chatted with Mario, the friendly owner. He was second generation Japanese, his father having emigrated from southern Japan to Paraguay shortly after the Second World War. Apart from four years studying in Osaka, Mario had spent his life in this village, although he looked forward to his retirement in three years when he planned to visit friends in Europe and Tonga, friends from his college days whom he still wrote too. Would he ever want to live in Japan? No way, he said. In Japan, everything is time. Everyone is watching the clock, rushing to the next appointment. Here, he said, the only time I have to keep is the opening and the closing time of the petrol station. The rest is up to you. An avid fisherman and hunter he showed me his rods and nets in the bed of the pick-up and then lowering the back of the front seat, the rifle and shotgun he brings with him. Just in case. Every Sunday is devoted to fishing, mostly for piranhas in a nearby river.

Wow, I'm in total awe of your amazing travels, Julian! I really hope to meet you again one day and hear all those crazy stories you must have! You'll have to take your next trip to Australia, where I will be from January. Cheers!

Hi ya julian
Im catching up on all your mad experiences! Nice to know youre out there. A fellow sufferer :) Nicer even, if you were out here. There seems to be a never ending peanut sate flood we need help with.
Safe rides
xx tati