"So how often do you get lost when you're cycling, you know, take the wrong road or something?", asked the smiling, bright-eyed Argentinian girl in the hostel.

"Well, I actually can't think of a time when that has happened...", replied the smug geographer the night before he left Mendoza. 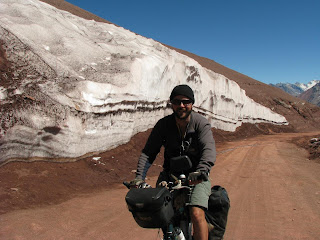 The irony of the conversation's timing struck me as I realised that I had gone 25 kilometres down a dead-end road and now had to retrace my tracks against the headwind and into the hot sun as I tried to find myself on the right road out of Mendoza. In my defence, the map I possess appears to show my cul-de-sac joining up with the main route from Mendoza to the frontier with Chile. But I never asked anyone, and therefore broke an unwritten rule about finding my way. Don't trust the map. Don't trust the people. Don't trust the signs. Ask and question all of them and perhaps you'll get lucky. 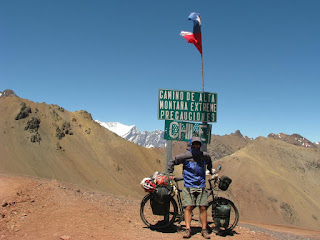 About to freefall into Chile

Almost two hundred years ago, on 19th January 1817, General Jose de San Martin set off with his merry band of Argentinian soldiers and Chilean exiles to liberate Chile from Spanish rule. The four-thousand troops crossed the 500 kilometre wide mountain range in 21 days and subsequently defeated the royalist Spanish troops at the battle of Chacabuco, despite losing over one-third of the expedition's members to the high mountains enroute. I was hoping to do it in considerably quicker time and with a lot less bloodshed.

Three days took me from Mendoza to Las Cuevas, the last settlement before the frontier, which most vehicles cross using the Christo Redento tunnel on the main road, the Pan-American highway. An alternative track, however, climbs a farther 600 metres up in altitude to the top of the Bermejo pass, that is lorded over by a four-ton Jesus. The statue marks the frontier and was erected in 1904 to mark the peaceful agreement that was reached by the Argentine and Chilean governments over a border dispute. 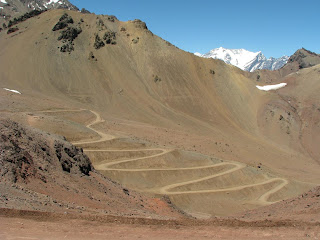 Switchbacks down into Chile

An international group of scouts were scattered along the 9 kilometer route to the top of the pass. In the afternoon they would bury a time capsule at the top of the pass and continue their ten-day walking pilgrimmage to Viña del Mar on the Pacific coast as a testament to the solidarity between Chile and Argentina, a relationship that has often been tested over the past couple of centuries as a result of sharing the world's third longest border of any two nations. I chatted with one of the leaders at the top and he appeared surprised that I hadn't heard the recent news about scouts in Chile, where a young scout was hospitalised as a result of a beating received during an initiation ceremony. While the incident was no doubt brutal, it did momentarily cross my mind on the windy summit that if this is the news making national headlines here, it appears to bode better than many other countries on the continent. The scout leader lamented the damage that had been done to image of scouting in Chile and he envisaged a lot of media interest in their current project, which he hoped would cast the association in a better light. 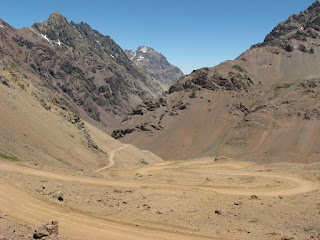 After a slow descent on the less stable surface of the Chilean side of the pass, I reached the Pan-Am highway once more and continued down the road to customs and migration. Officials appeared uncertain at first as whether to put me in the BUS or the AUTO queue, but thankfully chose the latter with far fewer people hovering about. More uncertainty when a loaded Rocinante appeared at customs, do I take the car lane and get the sniffer dogs or do I have to unload all the bags and put them through the x-ray machine like the bus passengers. Thankfully a friendly customs officer gave Rocinante a personal cavity search without requiring me to remove the bags. "What are those?", the officer queried as he squinted into the muddled depths of my panniers. "Lentils", I replied, with a guilty grin. Shaking his head ruefully he pocketed my supper in a large trash bag. Porridge oats are apparently not catagorised as Class A substances and with a wave and smile I was motioned into Chile, breakfast in tow. 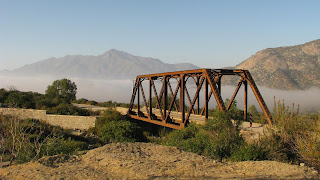 Over the past week I have struck north on the only other viable option that avoids the congested urban centres of Santiago, Valparaiso, and Viña del Mar and the busy Pan-American highway (Route 5). The route has passed along quiet tar roads and abysmal dirt tracks through the small towns of Cabildo, Illapel, and Combarbala to Ovalle. Cycling against the grain of the Andean foothills in the summer heat has encouraged a higher incidence of swearing aloud at the occasional American kestral that spectates from a perch on the telephone wires, but the rewards, as always, make up for the extra exertion involved in getting off the main routes. Invitations to a family lunch, beautiful camping spots, and huasos running me off dirt trails on decidedly energetic beasts have provided memorable moments. 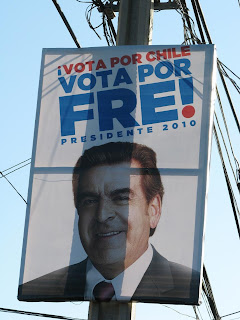 One of the vanquished in recent presidential elections

One evening I camped up in what appeared to be a deserted village, at least 15 kilometres from any sign of recent habitation in each direction along the valley in which I was traveling. The several stone-built houses in the narrow valley were all roofless and appeared to have been abadoned either in favour of following dreams of urban salvation or under threat from nearby mining interests. A warm wind required the aid of tent pegs to secure mi casa. As I removed the panniers from the bike, I noticed that both of the plastic fittings that secure the panniers to the rear rack had snapped. The following morning divine intervention and duct tape would make a temporary fix, so for the moment I decided not to lament over the broken plastic. After a vegetable stew cooked amid the ruins that were reminiscent for me of similar shipwrecked homesteads along the west coast of Ireland, I retreated to the tent. In the darkness I could hear a squeak being carried on the wind and eventually it drew nearer, the owner of a bicycle apparently pushing his way through the deserted valley, down a track that quickly dead-ended. My tent encroached on the path and for a moment the person stopped and was obviously considering the spectacle and Rocinante chained up to a tree, but shortly after moved on up the valley. Hills, daytime heat and broken rails, however, soon had me sleeping deeply and the following morning I could see the tracks of the bicycle and its owner continuing to the end of the valley, but all the houses were as empty as the evening before. 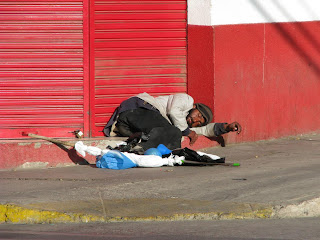 On the streets, Ovalle

I´ve been loving your photos and tales as well- when do you think you´ll make it up towards La Paz? I´ll probably be scrambling around Bolivia till the beginning of April at least. Maybe we will cross paths then! Best