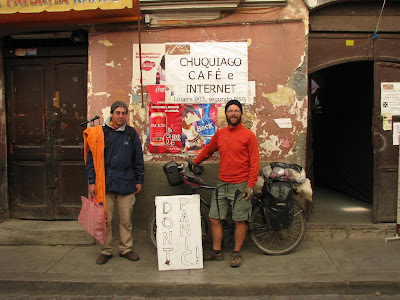 Cristian celebrates towel day, 25th May, La Paz
Leaving La Paz requires cycling up to El Alto, the satellite city that sits 400 metres higher on the edge of the antiplano. I followed Cristian's directions on the back of a tea bag but still found myself on the main autopista up. A less demanding but longer climb that winds its way up out of the concrete. Weaving through the taxis and out into the open country, heading west for Peru. I reached the border in the evening and the military police at one of the roadblocks performed the laying of the hands on my panniers. "What's this?", the policeman asked as he gently molested my front right pannier. "Clothes", I replied, and preempted his strikes by describing the contents of the other panniers, hoping I wasn't going to have to open them. "Buen viaje"... and I was into Peru. 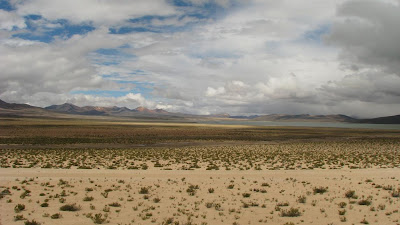 On the Peruvian antiplano
From the borderpost at Desaguadero I cut across the antiplano towards the coast and the Pan-American Highway. The last days of harvesting were underway before the cold sets in. On Day 2 in Peru I woke up to falling snow and a blanket of white on the surrounding mountains. The mining engineers in the hostel reckoned that the pass, Abra Huaytire (4800 metres), that I had to get over would have snow on it but rather than spend a day in ghost village of MazoCruz, I decided to hit the road and hope for the best, optimism outwinning logic. The first 50 kilometres were fine, but then the clouds came down and I found myself stuffing a peanut butter sandwich down and donning the wet gear. I was soon drenched and frozen but as I passed a bend in the mountains a house came into view and I sheltered for a couple of hours, whilst gingerly drinking a cup of mate that looked like it was made with the same water they washed the dog with. I also noticed the big rip in my waterproof trousers which would account for all the water getting inside. The fat-bellied owner of the little shop kept an eye out for passing trucks and every so often one would pull up, goods would be exchanged in an illict fashion. The most worrisome transaction concerned a small truck and its two occupants who bought two cases of beer for the road. 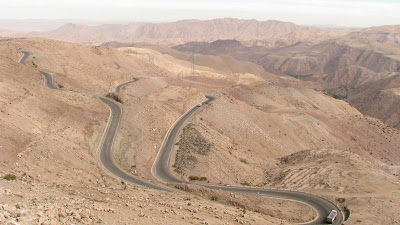 3000 metre, 85 kilometre descent from the antiplano to the desert
A crack of sunlight and I was back on the road. Hoping to make the settlement of Huaytire before nightfall. I arrived at sunset and asked for a place to sleep. I was brought to the friendly mayor of the hamlet and he showed me a spot on his office floor, between two motorbikes, that was mine for the same price as the hostel room last night. Ah well, at least it was indoors. He asked about Ireland and the trip and then his assistant, Luz, who had been condemned to serve the government for the winter months from her warmer hometown of Tacna, brought me to the only cafe in town where alpaca soup was the one and only plate on offer. It was very good. 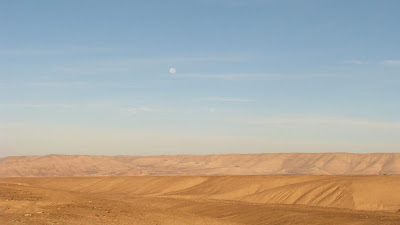 Full moon in the morning
The next morning I was off into the cold at 6am, hoping to reach Moquegua that evening. I climbed the first 10km and waited for the descent from the summit of the pass to begin but discovered that it was more of a roller-coaster ride along the top of the mountains that would leave me climbing and descending for the next 40km. The camera batteries refused to come to life in the cold at the top of the pass. Finally by 10.30 am I reached the top of the last climb and then began a 3000 metre, 85 kilometer descent from the frozen antiplano to the desert that lines Peru's coast. 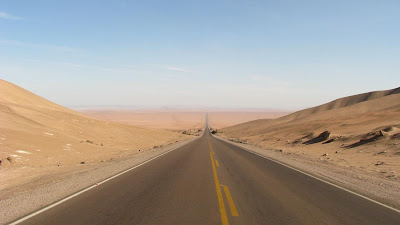 Northbound on the Pan-American highway
I arrived into Moquegua by lunchtime and after more alpaca I was searching for an interent cafe when I met Victor on the street. He said I could use the computer at his house and so I went back, met his family, sent some emails, and ate Victor's birthday cake. As I left he loaded me up with avocados, apples, water and a fluffy wooly thing that he said is for good luck. With an hour of light left I headed past one of the ubiquitous police checkpoints and out of town onto the Pan-American Highway that I plan to follow up to Ecuador and Colombia. Signs of life didn't disappear fast enough though, there was a string of shacks along the side of the highway and I thought it might be difficult to find a camping spot, but finally I climbed over some mountains and was back in the desert on the other side. I pitched the tent up, ate the avocado and boiled some pot noodles before falling asleep at 8pm. 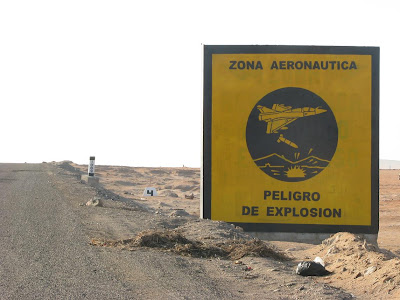 This could really ruin a nice day in the desert...
Days begin at 5am now. Sunrise is just after 6am and then there is eleven and a half hours of daylight before I'm confined to the tent again. From May to October the Pacific coast of Peru is regularly shrouded over in fog and visibility is reduced to a few meters. I decided it wasn't ipod country when some trucks emerged out of the mist and swept a little close for comfort as I climbed out of El Fiscal yesterday. It can clear quickly though and then the snow-capped volcanic peaks to the east appear out of the cloud. The colours of the sand vary from grey to red and with the settling fog it's quite a surreal landscape to pass through. After nine hours in the saddle and 150km I stopped at the first sign of civilisation, a petrol station, at sunset and after confirming with Jesus (the petrol attendent) that it was ok to pitch up, I was soon back in my favourite spot behind the toilets. Dinner was served by the friendly lady manning a kiosk - cheese pastries, crisps and lemon water. 990 kilometres to go to Lima.
I-have-no-idea-what-this-village-is-called, Peru
Trip distance: 32,442 km
Posted by Julian Bloomer at 18:14