Six hundred and eighty-six days since leaving home and I awoke on my thirtieth birthday to a tent being buffetted by what I confidently presumed was the prevailing southerly that is blowing me up to Ecuador. Well almost blowing me up. With Rocinante loaded, I pushed us back through the sand to the tarmac, trucks and kamikazi taxi drivers already plying the highway in the dull morning dawn, thick clouds only allowing a hint of sunlight through. Ten kilometres on a couple of eating houses stood in a ramshackle pile around a junction. Plastic bags fluttered by and to paraphrase Lieutenant Colonel Kilgore, "there's nothing like the smell of piss in the morning". Breakfast was tea and a small hill of spaghetti and lomo saltado. Fortunately for the happy pedalist, portion control has yet to arrive in Peru. A friendly truck driver insisted I have half of his fish, and unbeknownst to him I received my one and only birthday present. It tasted delicious. 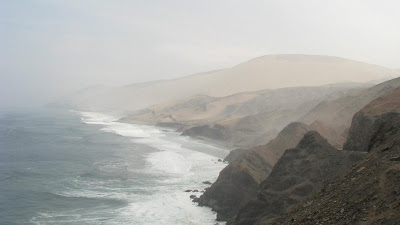 The following day I left Nazca early and headed north on the Pan-Americana. Deeming a flight over the lines a luxury I couldn't afford, I settled for the small viewing tower 25 km north of the town. Only two of the famous geoglyphs are visible from the viewing tower and the ten-minute experience was frankly rather underwhelming. A bellowing North American voice summed up my more reserved first impression, "Is that it?". The lines were created by the Nazca culture between 200 BCE and 700 CE by removing the reddish coloured stones and uncovering the paler ground beneath. Theories as to the purpose of the lines has varied from a combination of astronomical and religious practices to runways that served another highly advanced culture and their flying machines, the former gaining more widespread support but the question is still contentious. In any case, I think a flight is probably necessary to gain a better appreciation of the site. I plugged the music back in and continued north. 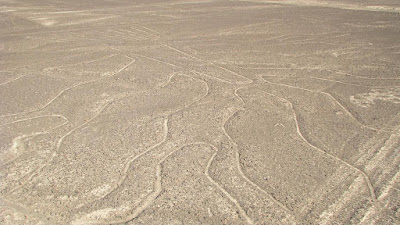 Nazca lines
On the outskirts of Ica a group of women were gathering around a taxi after a day labouring in the fields. I was asking the taxi driver directions and the women started asking questions about the trip. How long? How old? When they found out it was my birthday the day before they searched for a present and pooled a pile of the pecan nuts that they had been collecting and poured them into my pannier. They had spent hours harvesting fairly meagre piles of their own and here they were giving me a substantial portion of them. They passed by in the taxi further down the road shouting whoop whoops out the window and offering one of their daughters. 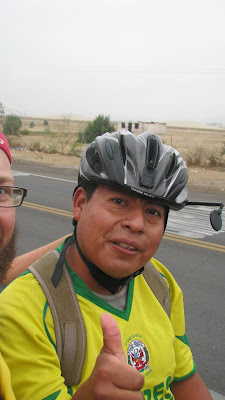 Melville, near Ica
Six o'clock Sunday morning and I rode through Ica with people still stumbling out of the nightclubs. A stall on the street corner was serving chicken and spaghetti soup with egg and coriander. A few kilometres of town and Melville, an off-duty policeman, pulled up alongside me and kept me going at a slightly too brisk clip at this hour of the morning. He told me the areas to ride through swiftly, the parts of the road ahead with no shoulder and wished me luck as he turned around to head back to Ica. Later on after riding past the outskirts of Pisco, I got my first puncture in the 6000-odd kilometres since Mendoza (where I had replaced my worn-out Marathon XRs with a new set). I pulled off the busy highway to a shack where a father was playing with his two young children. The kids stared at the show while the father carefully supervised my puncture repair techniques, pointing out when I was doing something he didn't like. Somewhat worringly it wasn't anything that had punctured the tyre, but some of the beading that was starting to poke through very slightly in one place. The kids gave me sugar-coated peanuts they were eating and I thanked them with a pile of fruit that had been maturing on the back of the bike.
I wasn't particularly enamoured by the thought of traversing Lima, capital of Peru and with eight million souls, one of the largest cities encountered in the past two years on the bike. I left Canete as dawn tried to break through the fine drizzle and made good time on the 140 km towards the city centre. First came the playgrounds of the rich, the gambling town of Asia and its luxury resorts. Then a gradual deterioration as I neared Lima. Shacks lay precariously pinned to the sides of colossal sand dunes. Many inhabitants of Lima's poorer districts having come from the mountains, displaced by the violent uprisings during the 1980s that repeatedly threatened to topple the government. On into central Lima and soon I found myself along palm-lined avenues, homes and businesses protected from the dune people by steel fencing and armed guards. Every possible North American fast food outlet lined the main drag, Avenue Bemvides, in the genteel suburb of San Antonio. I arrived at a hostel and was dumbfounded at the price of a dorm bed but too tired to move on. I took one day off in Lima and failing to connect with a couple of contacts I had there, I skipped anything of historical or touristic importance and settled for patroling the aisles of a luxurious Chinese supermarket and heading back to the kitchen hostel for some non-fried delicasies. 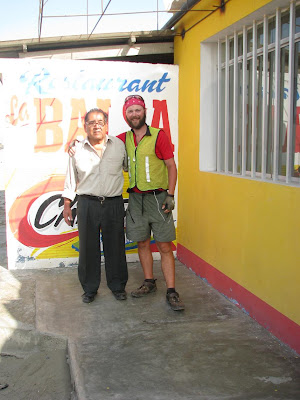 Clemente, owner of La Balsa restaurant, km 347 Pan Am Norte
Northbound from central Lima the city dragged out. Roadworks on the Pan-Americana norte thankfully slowed down the vehicles on the highway out of the city, unaccustomed as it was to bicycle traffic. I stopped at a petrol station after Chancay later in the day and pitched up beside the trucks that had pulled over for the night. I continued north, days interspersed with desert and then green cultivated valleys. Sugar cane being cut by hand and loaded onto rickety old trucks. In Huarmey I pulled into town one afternoon and discovered as I doodled in the internet cafe that the parents of a Peruvian fellow I had met in Chile lived there. So I called around and was put up for the night. Further north and I pulled into a restaurant at kilometre marker 347 and instantly Clemente had asked his wife to prepare fresh fish and chips as he showed me the guestbooks from all of the cyclists they had put up and fed over the 43 years he had been living there. Familiar names in the lore of bicycle touring and long distance walking popped out from the pages, including old messages from Karl Bushby and Jean Beliveau, both walking around the world. I sat reading the books and catching up on my journal and an hour after I had been fed fish and chips the restaurant was busy with Saturday afternoon traffic. Seventy-one year old Clemente kept popping by, however, and asking if I wanted lunch. Wasn't that it? A couple more cups of tea and I headed into Casma to try my luck at the firestation to see if all the rumours of Peruvian bomberos hospitality were true. Within moments, my proposal of pitching my tent on the floor between the tenders was waved aside and I was to be given a bed. Marvellous. Unfortunately I don't see a pole to slide down in the morning. That would have been fun.
Casma, Peru
Trip distance: 33,726 km
Posted by Julian Bloomer at 02:40

Too late but happy birthday anyway :-)
We keep following you.
We could give you 100 of nice places in North Peru and Ecuador. Too much to type here. and touristic anyway.