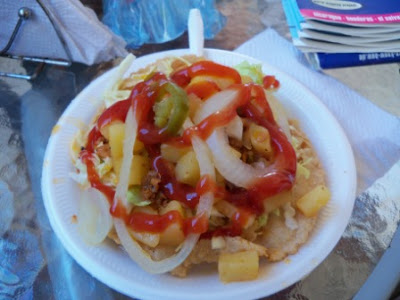 Enchilada time
As we climb up to Perquin in the rugged, pine-covered mountains of eastern El Salvador, it is easy to see how the town became a natural fortress during the civil war in the 1980s. For over a decade, the town was a stronghold of the Frente Farabundo Marti para la Liberacion (FMLN) guerrillas, who like their Sandinista comrades in Nicaragua, were waging war against a US-funded dictatorship. In the three-roomed museum at the top of the town, the former studio for the guerrillas' Radio Venceremos, an assemblage of photographs, weapons and copies of foreign press coverage of the civil war, detail the struggle from the FMLNs perspective. Our guide, a former guerilla himself, mentions the importance of the foreign coverage and support. Amongst the posters depicting effigies of Reagan and calling for support for the people of El Salvador, I spot a faded yellow card and a typed message in Irish from the Irish El Salvador Support Committee, with a contact name and address in Swords, Co.Dublin. Written in the aftermath of the massacre in the neighbouring village of El Mozote, where over one thousand villages of all ages and both genders were killed in December 1981 by the US-trained Atlacatl battalion and government forces. Over 75,000 people are estimated to have been killed during the 12-year long conflict. 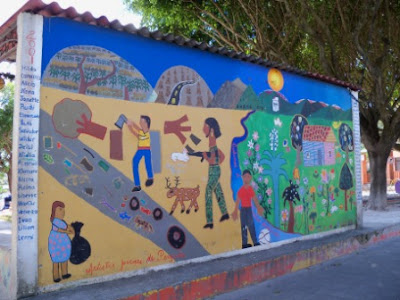 Mural in Perquin
Investment in tourism infrastructure has been part of the rebuilding programme to improve the economy of the Morazon region in the years after the signing of the peace accords in 1992. Perquin is promoted as a highlight on the so-called Road of Peace, a crossborder iniative with neighbouring Honduras. Ironically it is the same US government, albeit a very different administration, that is now financing the rebuilding process through such channels as the Millenium Challenge Corporation, that financed the arnaments and training of government forces during the war. Outside the museum, a crater marks the destruction of the first aerial bombing of the town by government forces and beside the hole is a replica of the 500lb bomb that caused it along with a sign reading "Made in USA". 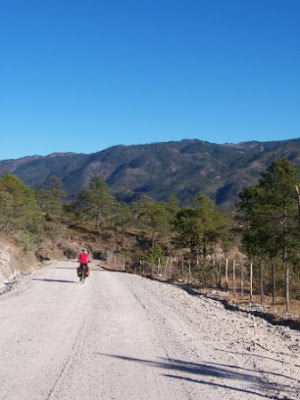 Early morning enroute to Honduras from El Salvador
From Perquin we climb further up through the dusty dirt track that leads to the Honduran province of La Paz. A closed immigration office apparently being no barrier to entry as a bored police officer waves us through without requesting even a peek at our documents. We arrive in Marcala later in the afternoon, as New Year´s Eve celebrations are getting underway, some people clearly having started earlier than others as they sway erratically through the crowded streets. Explosions of fireworks that have continued unabated since Christmas erupted around us. Outside the half-built police station we meet Dubai-born Shabeer and his Honduran wife and despite our shabby appearance we´re invited to their dinner party to welcome in the New Year. We turn up at the appointed hour to find a table set as we look through the window but an otherwise empty house. Finally our hunger gets the better of us and we go scavenging through the poorly lit town, only managing to find a plastic burger and a couple of bottles of beer before the power goes down in the town. We find our way back through the quiet streets to our bed. It´s only ten o´clock. A midnight artillery barrage of fire crackers brings us briefly to our senses - happy New Year! 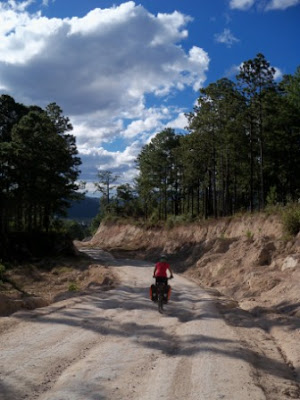 Bumpy descent into La Esperanza
From Marcala we work our way northwestwards, through the towns of La Esperanza, San Juan, Gracias and Santa Rosa de Copan. Lenca people make up the indigenous majority in this highland region. Markets are well-stocked with fruit and vegetables and dairy farming ensures plentiful supplies of cheese, milk and sour cream. From San Juan, pine forests give way to coffee plantations. The price is good we´re told at the moment, business is booming. Yet for most Hondurans, work isn´t easy to come by at home. Everyday someone yells "Hey buddy!" as we pass by, having picked up English in New Jersey, North Carolina, Miami or Los Angeles. Everyday we meet young men who´ve worked in Los Estados, four years seems to be the average. Over one in seven Honduran´s are now living abroad, the majority working as illegal migrants in the US. Busy Western Union offices in even the smallest towns are testament to the importance of remittances. 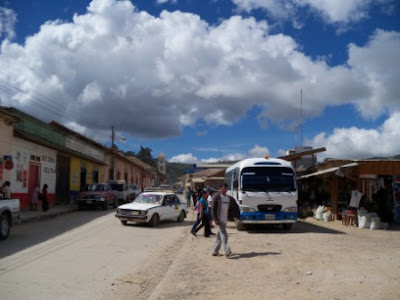 La Esperanza
More unrelenting hills bring us from Santa Rosa de Copan to the Mayan ruins at Copan. Away now from the more remote and peaceful mountain towns, we move into cattle country and cowboy culture, where big hats, big boots and big guns become more prominent. As Ellie and I eat our lunch of beef, beans and tortillas at a comedor near La Entrada, a friendly and helpful builder on his lunch break gives us details about the route ahead. His companion notices how our gaze keeps coming back to the young builder's hips and explains, almost apologetically it seems, about the crime and la delincuencia. The seven-year old daughter of the proprietor asks him what he would do if a robber came and he instantly snaps the safety catch on his plastic hip holster and pulls out his gun, mimicking a firefight where he is the victor. Then he holsters the gun, turns and smiles and walks outside. 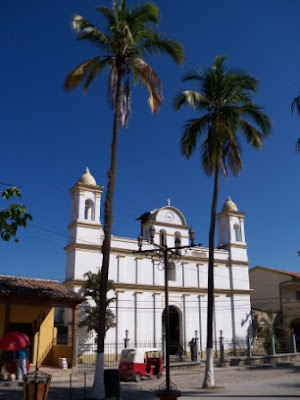 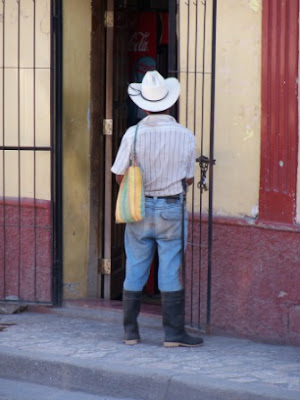 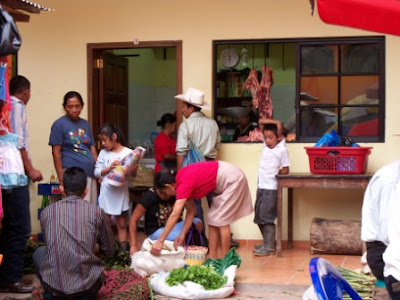 The Copan ruins mark our entry into the southernmost point of the ancient Mayan empire that flourished between today´s western Honduras and southern Mexico between 2000 BC and 850 AD. Copan was one of the four royal cities in the empire and today, after reconstruction in the early twentieth century when the ruins were reclaimed from the jungle, it is now possible to walk through the former royal quarters, acropolis and the plazas that formed the core of the city. After a couple of days spent at the ruins and at the nearby town of Copan Ruinas, we fixed some punctures and pedaled the final 12 kilometres, up one big last Honduran hill and down to the border at El Florido. Our lack of entry stamps into Honduras not fazing the friendly immigration official, we were stamped out of Honduras and into Guatemala. 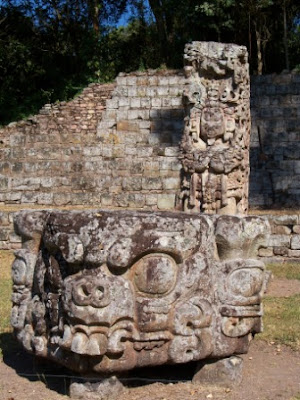 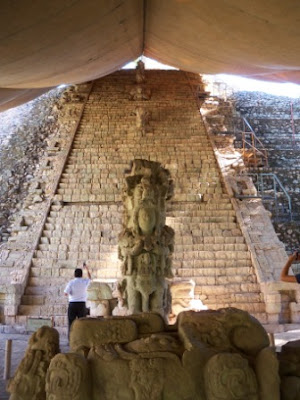 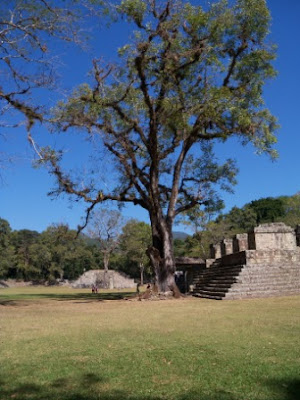