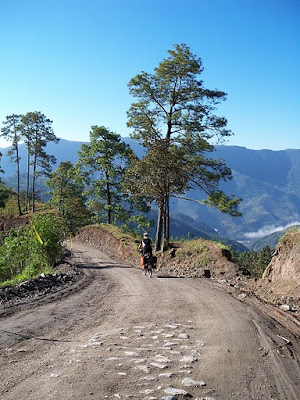 Westbound on Highway 7
After crossing the River Motagua and leaving behind the busy east-west highway that links the western Guatemalan metropolis' with the east of the country and the Caribbean, we began climbing into the Verapaces. The department of Alta Verapaz has been making the news recently when the Guatemalan government gave extensive powers to the police and military there a couple of months ago to combat the influx of the Mexican Los Zetas drugs cartel, who have been infiltrating the department to establish new smuggling routes from central America into Mexico. We didn't see much signs of this extra activity, nor did we see the resplendent quetzal, the region's famed bird that lends its name to the national currency. 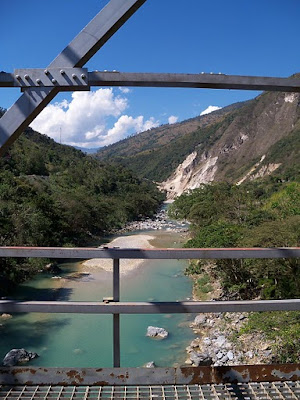 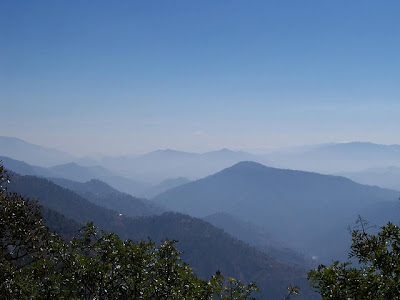 The further we entered the highlands, in fact, the less shotgun toting security guards we came across and instead found quiet mountain towns where indigenous languages still predominate, and traditional costumes still worn daily as a symbol of the highlander's independence and determination to preserve their culture. Many of the highland areas in El Quiche and Huehuetenango departments suffered terribly at the hands of State forces and paramilitaries during the civil war in the 1980s and early 90s, with over 450 villages being destroyed and 200,000 people killed. These days there's little sign of the past conflicts as farmers harvest their potatos and maize crops. 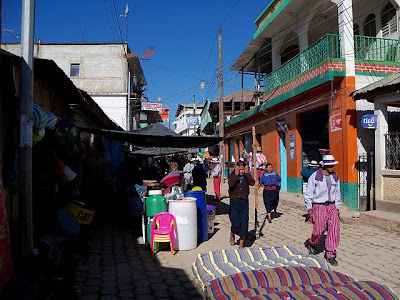 Market day in Todos Santos
Pedaling through the highlands involved some of the hardest cycling conditions encountered since Bolivia and the high Andean passes with relentless, inhuman grades and rough tracks that are regularly obliterated by landslides. Most days involved a gain in altitude of about 1200 metres as the roads weaved their way up to over 3300 metres and back down to several hundred metres when crossing rivers. While the going was slow,  we enjoyed the friendly villages and towns where we passed through and as well as countless cups of arroz con leche (hot milk and rice) and enough beans to make a sizeable contribution to the region's greenhouse gas emissions quota. 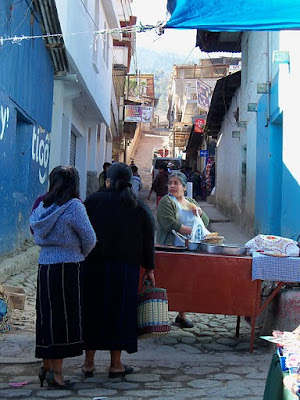 Market day in Todos Santos
Following a couple of day's off in the chilly highland town of Todos Santos, we bumped our way slowly down out of the Cuchumatanes onto the relatively flatter limestone plateau that stretches northwards from the base of the mountains and marks the border with Mexico. The recent establishment of additional official border posts along many parts of the Guatemala/Mexico border has ensured that small towns such as Gracias a Dios, from where we crossed into Chiapas province in southern Mexico, are booming from the resulting trade. Our two-year old map was already out-of-date and the horrendous dirt roads that I was expecting materialised into newly paved roads. 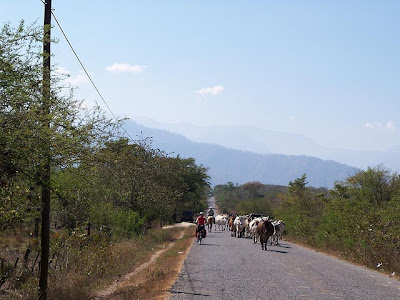 Heading for Mexico
We changed the last of our quetzales and some dollars into Mexican pesos in Gracias a Dios, under the watchful eye of the scar-faced chubby moneychanger who eventually agreed to give us eleven pesos to the dollar. His friend leant against the hood of a pimped pickup and sported a ivory-handled revolver out of the front of his jeans. Crossing the border we were greeted by friendly Mexican officials who carefully examined our passports before giving us a very generous 180-day tourist visa as well as directions to the national park at Montebello lakes. We spent our first night at the lakes, camped inside the kitchen of the park guards and listening to the rain all night. The following morning we donned the wet gear and piled on the plastic bags and visited the disappointingly cold and misty lakes before heading up to Comitan de Dominguez. The following day we rode the 95 kilometres and 1200 metre climb up to San Cristobal de las Casas, where we've just taken a week off the bikes, visiting the city and surrounding area and catching up with my Scottish friend Kirsty with whom I'd cycled across northern Spain in 2008.
Last Tuesday we were all sitting up at one of the viewpoints looking down on the city and wondering why two Humvee loads of soldiers had chosen the same spot to take some air. Later we found out that the high profile security was for President Felipe Calderon, who had been visiting the city to pay his respects to the late Bishop Samuel Ruiz, who had died the previous week and who had played an important part in the peace process between Zapatista paramilitaries and the Government in the mid-1990s.
San Cristobal de Las Casas, Mexico
Pedalled: 40,650 km
Posted by Julian Bloomer at 01:00

Hey, that's the first time you've overlapped with somewhere I've been! I spent a couple of days in San Cristobal once. Where to next?

Hey... Pedaling up to Oaxaca city at the moment and then on up around Mexico City. Not sure yet about the north - either via Copper Canyon and the Sonora desert or else up the Baja. Not sure yet where we'll pedal up through the US - either up the west coast, or else further inland up through the mountains, but might leave the bikes and bus it out to California for a bit if we do the latter. May be in California sometime in May or June - will you be around? Come pedal for a bit :)

I'll be around. And so will Derry. You guys should talk to each other. He's planning to come for April, May and June and bike around California. I'll give him your email.