Leaving Matsumoto last weekend and waving goodbye to Jim and his family, who had hosted me for an evening, I stopped to fill my water bottles up at a spring in the lane behind his house, beside the local saki brewery. The night before, over a tetra-pack carton of Japan's finest (and the cheapest we could find in the Seven Eleven) I asked Jim, a twenty-two year veteran of cheap saki what the secret was. "They say it's in the water", he said, staring into his glass.

My goal for the next couple of days was to be the literal high point of the northern Japanese Alps as I climbed up and over the Norikura Skyline road, the highest pass in Japan at 2720 metres, and which is a largely car-free road for 40 kilometres over the summit of the granite batholith with only shuttle buses and taxis being allowed on the route through the Chubusangaku national park.
Weekend traffic was surprisingly busy on the narrow route approaching the turn and the long, narrow tunnels that had been built during the Second World War were at times a little unnerving. I was relieved to reach the turn off for the small tourist settlement of Norikura village and I expected the traffic to thin out as I left the main route but as indicators came on it seemed like everyone was heading the same way and everyone had a bicycle with them too. It turned out that I had arrived along the afternoon before a famous annual bike race that would see over 4,000 cyclists race the last 20 kilometres from Norikura village (1200m) to the top of the pass. The top amateur and semi-professional cyclists were gathering from around the country to participate. Most of the guys I spoke to initially assumed I was some sort of comedy entry. When they realised I had no intention of paying 8000 yen to climb a hill and come paddy-last they explained that the road would be closed for most of the following morning for the race but I could pitch the tent up in one of the fields where competitors were parking and pitching their tents or preparing their bikes for the race the next day. 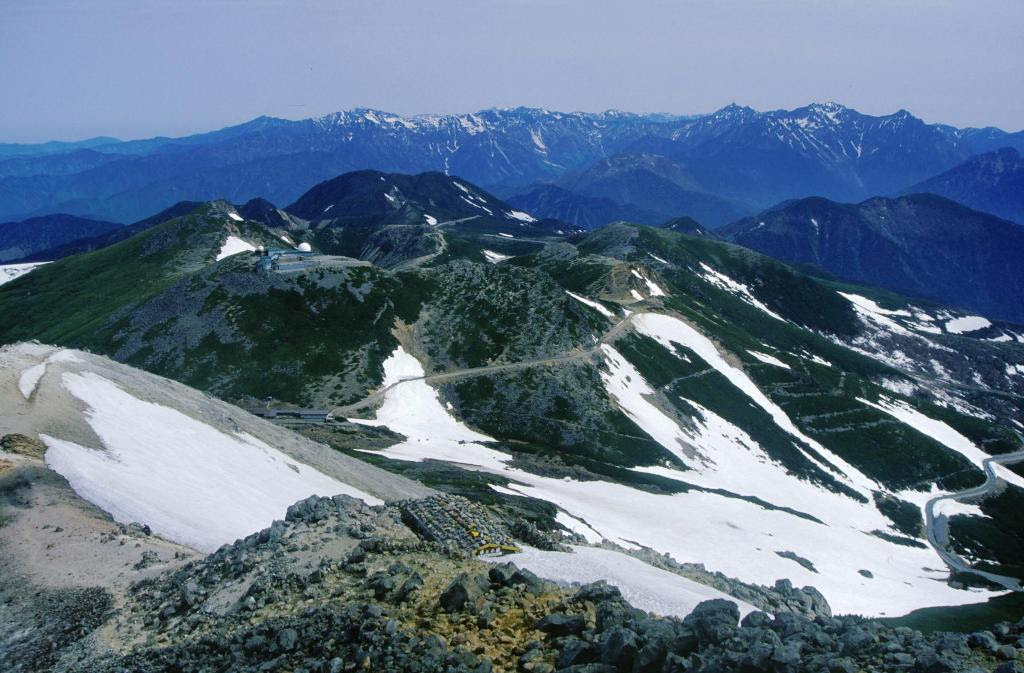 The following morning I watched the riders set off at intervals in groups of several hundred up the rain-soaked road. As the sun came out and dried the road and the tent I packed up and decided to see if I could pedal up behind the last group rather than wait another few hours until the route opened again officially. I was sure I would draw the wrath of the normally gracious baton-waving traffic controllers but a smile and a look of sympathy at the martyr who they seemed to assume was just a very late entry and off I went. Three hours later (not including rest stops) I crested the summit, having had all 4000 entrants pass me on their  descent to the village, any signs of the mornings event were packed up and long gone. Someone told me the king of the hill had managed to achieve victory in just over 55 minutes.
Mixing with the young and ancient who had bussed it up to come to climb one of the surrounding peaks, I put a fleece on for the first and only time in August and left Rocinante by the bus stop as I joined some recent arrivals and plodded up to the nearby peak of Maou-dake. Back on the bike and I descended the 60 kilometres to the historical centre of Takayama in the late afternoon, stopping just once outside a shrine in a picturesque village where the old lady that I was sharing the bench with, shuffled into the nearby shop to return with a bottle of Pocari Sweat, Japan's favourite sports drink. I continued on to Takayama and made my way to the local park just as the rain started and found a covered bench where I planned to spend the night. An hour later a group of eight university students cycling from Osaka up to Niigata arrived along with headlights flashing, as surprised to see me as I was them and we shared the space for the night, swatting blindly about for mosquitos as we fell asleep.
Osaka, Japan
Trip distance: 49,033 km
Posted by Julian Bloomer at 17:02