99. A short walk in the Himilayas - Part 1: On the Tamang heritage trail

An early morning flight from Delhi to Kathmandu was the last leg of our three stage return journey to Asia last week and as our Jet Airways 737 plane crossed the India-Nepal frontier on the rudimentary flight navigation screen in front of us, snowy Himilayan peaks pierced the white sea of monsoon cloud outside. The rising sun caught the eastern flanks of the jagged Annapurna, Ganesh Himal and Langtang massifs before our plane descended through the fluff into the Kathmandu valley. 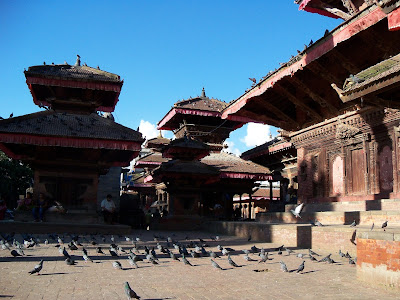 The capital's bustling, bumpy and traffic clogged streets moved slowly past on the way into the old city. Swollen by migrants seeking work and earlier arrivals seeking to escape the Maoist conflict in affected rural hinterlands (between 1996 and 2006) the city struggles to provide a livelihood and basic needs to its two million inhabitants. Given that the Himilaya-Tibetan mountain range provides water for an estimated one fifth of the world's population, it's ironic that one of the most pressing issues for Kathmandu's authorities is the provision of water supplies with only three quarters of the daily requirement of over 200 million litres being met by the water authority. The only way to supplement this shortfall has been the pumping of groundwater under the city using trucks and home-installed pumps but the supply will not last with groundwater levels dropping over 2 metres annually. In addition to rapid and uncontrolled urbanisation, the government blames increasingly erratic weather patterns, including poor monsoon rainfall amounts in recent years, for the shortfall. With its dependence on rain-fed agriculture and its largely mountainous topography, Nepal is going to be highly affected by climate change and was ranked as the fourth most vulnerable country in a 2010 study. Flash flooding and soil erosion due to melting glaciers as well as rising average maximum temperatures are some of the predicted scenarios that will affect vulnerable populations. Meanwhile political instability in the aftermath of the civil war has resulted in weakened and fragile institutions that undermines efforts to adapt to climate change. 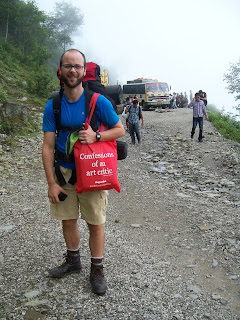 Off the bus to pass the landslide

After a few days exploring the old city and its historic sites and sorting out the trekking permits, national park fees and hiring some camping gear, we left all our non-hiking gear (such as four bicycle tyres and inner tubes) with the guesthouse in Kathmandu and headed for the hills on a rather epic nine hour journey to the hamlet of Syaphru Besi, just a few kilometres short of the Tibetan border. We were looking for an easier trek to test our equipment and ourselves on before venturing further into the hills, so with Robin Boustead's Nepal Trekking and the Great Himilaya Trail in hand we selected a recently developed route known as the Tamang heritage trail - a circuitous route in the western part of Langtang national park. Getting to the start of the route seemed like more of a challenge than the actual hike as at least two landslides blocked the road from Kathmandu to Syaphru Besi. We turned up at 6 a.m. for a 6.20 departure last Monday and left exactly on time, our rucksacks tied on to the roof. As predicted we made it about four hundred metres before the first stop to pick up more passengers and on it went. As the sturdy behemoth lumbered up the mountain road  out of the Kathmandu valley we would go through a comical procedure every time we neared one of the numerous police or military checkpoints on the route, with all the men sitting on the roof climbing down the side of the bus and through the open doorway into the corridor until we cleared the checkpoint and everyone returned to their space on the roof. To avoid her usual affliction of motion sickness on such journeys, Ellie had taken some pills that knocked her out for the first six hours. As Ellie's head revolved in a Dervish's dance between the dirty window and my shoulder I looked on as more and more of the passengers succumbed to the winding road and resorted to vomiting out the windows on either side of the packed bus. At one point a pregnant woman who appeared to be going into labour sat on a sack of grain in the aisle and filled the plastic bags provided by the conductor. After seven hours from our dawn start from the capital we came to a sudden halt in the high mountains and had reached our first landslide. Everyone disembarked from the bus and carried their packages, including truck batteries and 50 kg sacks of grain, to the waiting bus about twenty minutes scramble away. After a narrow escape from a gas bottle that someone threw off the roof of the bus, we boarded another bus for a short journey to the next landslide which then involved almost an hour of walking along a small track carved into the landslide. Finally at 3 pm we arrived into Syaphru Besi. I am still not sure how they got the bus in between the two landslides. 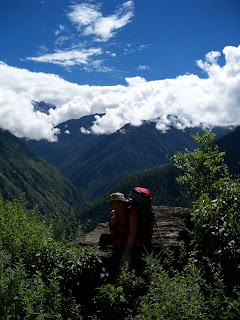 Over the past five days we walked the Tamang trail, which took us up to over 3000 metres and we stayed in homestays and community teahouses. The Tamang (which means horse-trader in Tibetan) are believed to have originated from Tibet and crossed into Nepal a few centuries ago where they have maintained their Buddist traditions. Several hundred year old monasteries can be found in some of the villages and prayer flags flutter in the breeze as stupa mark the landscape with inscriptions of the Buddhist mantra, Om Mani Padme Hum. Although roads have begun to penetrate the area in the bottom of the valleys, people rely on a system of walking trails to take them between their hilltop villages and their fields and forest. A hydroelectric power station in Syaphru Besi has begun to provide power to a few of the larger villages and mobile phone coverage has increased the speed of communication with the outside world exponentially. While there appears to be a great optimism in how much tourist revenue will be brought in since the area was officially opened to foreigners in 2002 following the resolution of Nepal-China border disputes in the area, one wonders if all the newly constructed teahouses, the usual trekker's accommodation, will be filled even in the high season (October/November). In some of the smaller villages, teahouses now seem to out number other dwellings and we only encountered two guided trekking groups (nine people in total) during our time there. It's still early in the season though, as the cloud-bounded slopes failed to reveal much of the grandeur of the surrounding landscape, although the brief glimpses were very rewarding. Stumbling along with our loaded packs, we were constantly humbled by the young and old who raced pass us balancing large loads in baskets on their backs and using a harness over their forehead to haul their burdens. 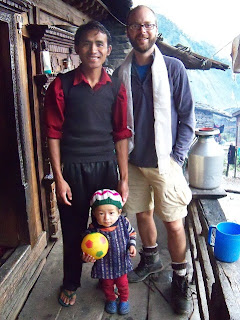 At Rajesh's homestay in Gatlang village

Yesterday we arrived back in Syaphru Besi and decided to give our legs a rest today before we take the Gosainkund trail back towards Kathmandu, a nine or ten day hike that will take us over the Laurebina pass and then continue to descend on one branch of the Helambu trail to Kathmandu valley.