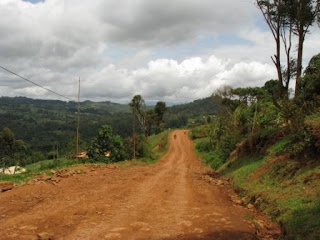 On the Ring Road

I'm suffering from a rare strain of tropical blogger's block here in Yaoundé, capital of Cameroon. Yesterday I attempted to write a post on the highlights and lowlights of the past three weeks of pedaling through Cameroon, but I wasn't satisfied. Waking up with renewed enthusiasm this morning and fuelled by some of the finest pastries this side of the Cameroon highlands, I thought I'd make another stab at an update... 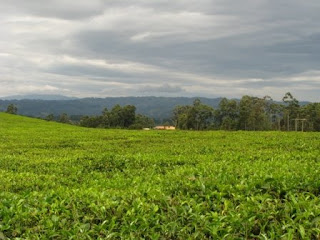 A lot of tea

After our weekend sabbatical in Nkambe, where we recovered from the Great Trek across the Nigeria/Cameroon border, it was hoped that progress might improve. It remained rather pedestrian, however, as we headed south along the eastern section of Cameroon's Ring Road - a 340 kilometre track, at times passable, that dips, bends, and more often than not rises its way around the western highlands. By the evening of day one out of Nkambe, we'd covered a bumpy 37 kilometres to the small town of Ndu, home to Cameroon's largest tea plantation. For all the tea in Ndu, I couldn't find a cup to sample, but I did make another profound discovery - fried 'Irish potatoes', as the tubers are referred to here. Combined with roasted fish, I had found the two culinary staples that would leave a happy and lasting impression on my mind and stomach as we pedaled and pushed our way through the highlands. Meanwhile Peter was off discovering the locally-brewed bamboo wine, which can also leave a rather long lasting impression on the mind apparently. 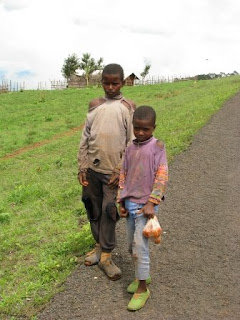 Boys on a hill

From Ndu we rode on to Kumbo and Jakiri, the latter a British army garrison post in the years leading up to independence. The North West and South West Provinces of Cameroon, form the core of the area that was formerlly British controlled. The result is that Cameroon is split into two distinct areas of anglophone and francophone populations, although the latter easily dominates the former in terms of its influence and geographic spread. On the evening of the third day out from Nkambe we arrived into Ndop, in time to sit out yet another afternoon of rain. Ndop marked a return to tarred road and the following day we headed on to Bamenda for a couple of days rest at the Baptist Mission. 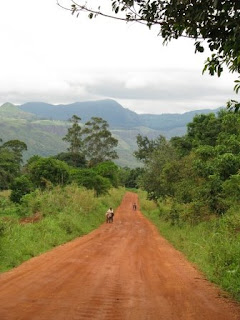 Opting to follow the tarred route south, we headed via Bafoussam and Kumba to Buea, the town that serves as the base for organising ascents of Mount Cameroon. On a rainy Monday afternoon in Bafang, we ate some great beef stew and beans while Raphael, a pineapple exporter, explained the intricacies of the trade to us. Two days previously he had harvested four tons of pineapples. That same evening they had been driven to Douala airport and flown to Paris from where they are taken to a wholesale fruit market in time to be on the shelves of retailers by Monday morning. So right about now, when I was tucking into my beef and beans and lamenting about the state of the tropical fruit market in Cameroon, someone has just returned home from a trip to their supermarché or local fruit and veg shop and is cutting open a ripe and juicy pineapple in Paris. Comprehension of the timeframes involved, in comparison with myself and Rocinante's voyage, momentarily stunned me. For a moment I thought what it would be like to travel at the speed of a pineapple. 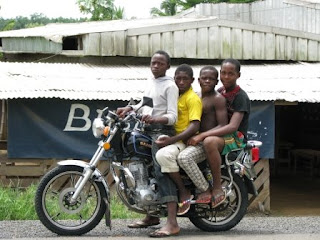 A dusty road led us from Loum junction over to Kumba and late one afternoon we had our first and only problematic roadblock in Cameroon. The police and gendarmerié being very kindly disposed to traveling pedalists thus far. I arrived at the crest of a long hill to see Peter in animated conversation with the two officers on checkpoint duty. They could not assure us of the road ahead and given that we would not make Kumba before nightfall we should stay in their village, which coincidentally had a hotel that they could recommend as being up to our quality. We began to insist that we would be fine asking for accommodation in the villages that we would pass through ahead, but then the more rotund of the two began yelling that the road was notorious for armed robbers and that they would surely cut our heads off if we were captured by them. With miraculous timing, the manager of the nearby establishment that they were gesticulating at, bounded down the path and also began arguing and saying it would be foolhardy to go on. In the end Peter discovered that he had left some money at the junction and he had to return there anyhow, so after we negotiated the room down to a reasonable 3 euro per head we had a bed for the night.

Buea is situated on the slopes of the still volcanically active Mount Cameroon and serves as the base from which to organise a trek on the volcano. Having already a contact number for a guide, we bypassed the more expensive agencies that organise the treks. Shortly after dawn on a pleasantly cool Saturday morning, with not only Joseph to guide us up, but Peter No.2 to act as our porter, we felt like a proper pair of colonials as we set off up the so-called and clearly marked Guinness track that leads very much veritically to the 4100 metre summit. Guinness sponsor the annual suicidal marathon up and down the volcano, called the Race of Hope, hence the trail's name. It took over four hours to reach Hut 2, at 2850 metres, the preferred place to overnight on the mountain. After some lunch, however, I developed some stomach cramps and resigned myself to spending the afternoon at the hut, whilst Peter went up to the summit. The night was cold and immediately after our dinner of spaghetti and cabbage we both dived into our sleeping bags. A few minutes later my head torch was on again and scanning the bare and graffiti-lined room for signs of furry creatures that I could hear running about. A large rat emerged with a dazed look from the remnants of our dinner in the cooking pot and dived off the wooden ledge as he was followed by my flying sandle. The following morning, deciding against an attempt at the summit, we trekked back down to Buea and then more-or-less rolled the 60 kilometres down to Douala, Cameroon's largest city. On the outskirts of town we found the Hotel de Bojongo and opted for the nightly rate as opposed to the cheaper and obviously popular two-hour 'siesta' option. 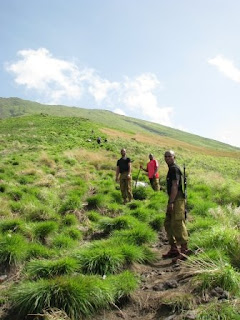 With a quickly expiring Cameroonian visa in our passports, we had to push on to Yaoundé to ensure that we could pick up a visa for Gabon. It was muggy riding at sea level and my daily water intake was back up to pool-sized quantities, interspersed with sufficient doses of Coke, which I'm assured cures all manner of ailments.

On the eve of Cameroon's Independence Day we found ourselves at the junction village of Boujeyem. After a row with the manager of the only sleeping establishment in the village, who assured me that the police would arrest us and fine him if they found that two men were sharing a double bed in a hotel, I headed downtown with my newfound friend Bisso, a chef in Douala who was visiting his homeplace. The town was hopping and Bisso displayed his impressive dance moves whilst Yvette held my arm and tried to secure a husband, job and home in Ireland, where she has always wanted to live.

After a night of dancing at the crossroads - Cameroonian-style - it was back on the bike to Yaoundé. The political party banners were out in force on Independence Day and it appeared that those celebrating most vociferously were clad in political party t-shirts, or had Paul Biya's head printed on their dress. Biya is the head of state and has been since he came to power in 1983. The celebrations were winding down as we rode through the capital to our refuge in the Presbyterian Mission.

Hi, nice blog. Are you running Marathon XR tyres? Still on your first set I'd imagine. How are they looking?
Safe travels.

Yep, using XRs. Still looking pretty good after 15k although rear is getting worn down now. 9 punctures to date. I like them :)

Plan to exchange for another pair after South Africa.

I did the same in Morroco after the first punch, changed rear and front after 12000 km.Now, after 21000 km,still one punch! Think, I forgot how to fix a punch?