27: A short note from the Congo 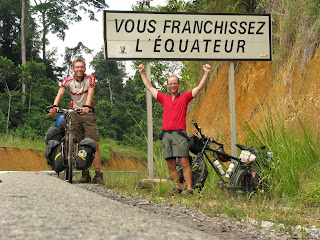 Near Alembe, Gabon - happy days
Greetings from Pointe Noire in the Republic of Congo. That's the smaller of the Congos, capital Brazzaville. We've been tracking southwards with a vengence since leaving Yaoundé in Cameroon about three weeks ago. After Cameroon we continued into Gabon, where there was a lot of speculation about the fate of the country should President Bongo, Africa's longest serving leader, die in the Barcalona hospital where he was being treated for suspected cancer. A Liberian refugee who had already witnessed the implosion of Liberia in the early 90s and migrated to Gabon to start another life, was pessimistic about Gabon's political future and stability should Bongo die and his adopted son attempt to succeed him without holding elections. A French expatriate was making preparations to leave in case there was going to be unrest.

Bongo died on our last day in Gabon and initially it appeared that we wouldn't be able to get through the border to Nyanga in Congo-Brazzaville, as all borders into Gabon were closed. But we made it, despite being told not to attempt to cross the border by a military officer in Ndendé, the border officials let us through without a problem, since we had already received our exit stamp in the passports. We plunged gratefully into the mud and then dust of southern Congo. We rode through Nyanga and Kibangou before spending five days ascending and descending along a logging road through the Foret De Mayumba and emerging into the oil-rich economical capital of Pointe Noire.

Internet is as rare as hen's teeth in this neck of the woods, so you'll have to wait for more, but all is going well. Next stop, Angola. 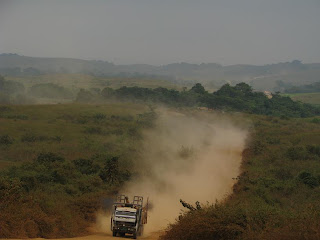 Watch out for men with guns :-)

How about the dangers in Congo? Did you do your research about the areas you cycled through? You don't want to run into the rebels up there..

We passed through the Rep. of Congo rather than DRC and there problems of the kind you mention are confined to a small area of the Pool region, i.e the road between Dolisie and Brazzaville - although things are apparently quite calm at the moment.

All the best
J

We are back home... and the terrible thing is that we already need an agenda after less than a week.
we hope to stay a little longer on the road with you on your blog!

hi Julian,
Last time our cooment didn't came true :-(
We are back home in Belgium.
And after less than a week we need an agenda, that's a sad thing!

Nice to stay with you on the blog some more time in Afrika and on the road...

Hope to meet you again.
Veerle and Gert

You crossed the equator just six weeks behind us. Not bad for pedal power! Glad you're still going strong, hope you have a fantastic time in South America. We're back in London now and not enjoying it.