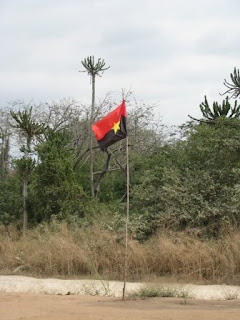 An MPLA flag in northern Angola
As another fiery sunset engulfed the western horizon last night we found ourselves squeaking into Lubango in southern Angola. Angolan roads have finally forced all the bearings out of Rocinante's left pedal and she now sounds like every other village bicycle in Africa. After crossing into the oil-rich Cabinda province from Congo Brazzaville three weeks ago, we made an "exciting" ten and a half hour boat journey along the palm-lined coastline of the Democratic Republic of Congo and across the 20-kilometre wide mouth of the Congo river, experiencing multiple engine failures enroute, before arriving back on terra firma and mainland Angola. From Soyo we bumped south through N'zeto and into Luanda, where after a brief layover, we continued south along the coastline to Lobito before climbing up onto the cold plateau where Lubango lies. From here it's just a four day ride to the Namibian border. 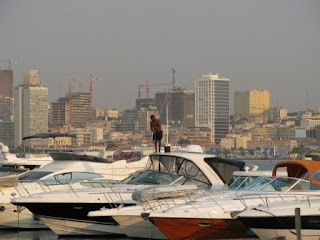 Toys of the wealthy getting washed in Luanda's sailing club
Angola has been a fascinating country for me. A country that has made a remarkably swift transition from the chaos and brutality of a 30-year civil war that ended just a few years ago, into a country that is now busily preparing for its hosting of next year's football competition, the African Cup of Nations. With a newly exploited oil wealth fuelling the economy, there is little sign of the global economic crisis in Luanda. Construction trucks from Chinese, Brazilian and Portuguese firms clog the city's arteries as they build more skyscrapers, motorways, and football stadiums. And yet, so many of Angola's fifteen million population remains outside of these changes, facing the task of daily survival without access to clean water and other basic services. Vast amounts of money are being spent on rebuilding a road network, while almost every village we passed through lacked a water pump. 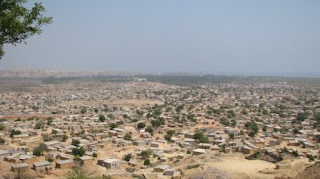 Sumbe
Talk of corruption and the 'resource curse' abounds and witnessing the incredible displays of wealth, particularly in Luanda, now one of the most expensive cities in the world, the wealth gap certainly feels oppressively vast. As one expatriate worker in Luanda put it to me, there is so much potential here to get things right and yet, there is so much potential to get it all wrong. Yet, it's also easy to make these comments as an ignorant passerby and much harder, of course, to rebuild a country that has suffered the history of Angola. Like other countries in the region, the major party, the MPLA enjoys vast popular support, winning over almost 90% of the electorate in the last elections in 2008. Such statistics certainly don't make for healthy democracy but hopefully with time things will change, wounds will heal, and people will be ready to trust and place their confidence in a wider political field. 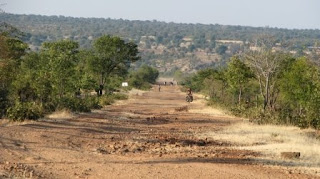 Another great road...
When we arrived into Lubango last night we found our way to the Catholic mission and after asking if it was possible to pitch a tent for the night, we found ourselves invited to first a dinner, and then a priest's ordination party, and we were then given a room and bed for a couple of nights. Such hospitality, from both Angolans and foreign workers, has been the norm during our time here. At dinner last night we chatted with Father Jacinto about his time campaigning for rural land rights, and how after he had brought the spotlight of international human rights organisations to the cause, he had to flee to Europe when death threats were made against him. He still can't return to the parish where he was based. Later on at the party though he turned out to be the finest dancing priest that I've ever met.
Lubango, Angola
Trip distance: 18,086 km
Posted by Julian Bloomer at 10:53

Another good entry; thanks Julian.

Hi julian
Happy to see that you are always on the road. Go on an enjoy