Monday morning last and a sinking feeling in my stomach began as the boiler-suited man pursed his lips and twisted his head from side to side, gesturing at the futility of prizing the broken drill bit from the braze-on that holds my right front rack onto the fork. It's hopeless, he said. Or at least he said something like that. Like all men who are destined to fix the mistakes made by others, he once again rebuked me for attempting to fix the problem myself. I pawned off a large part of the blame on 'el mechanico' who had tried to help me but had used too large a drill bit. I reenacted my journey on the greasy floor of his workshop. Amidst the iron filings I drew lines and named countries and continents. Why would this man care? But it worked. With renewed determination he tackled the braze-on again, all to no avail. Finally he decided he could weld a new one on and that would be the only solution. I wasn't excited at the thought of him going to work on Rocinante with his oxy-acetylene torch but he seemed positive and told me to come back at 6pm. Six hours later and I held the fork in my hands, admiring his handiwork. In a moment of glee I handed over slightly more than he had asked for ($30 pesos, or approximately 5 euro) but he looked quizically at the additional money and handed it back. 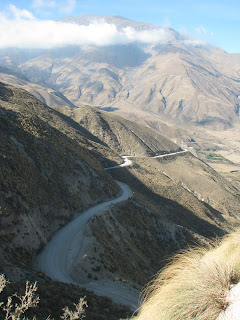 Cuesto del Obispo
Tuesday morning and forty kilometers out of Salta I turn into the mountains. Namibia was the last country I had a puncture in and then within the space of 24 hours I get three. The first occured as I passed a turn-off for the small town of Chicoana and after taking off the rear tyre I realised that this Schwalbe marathon xr had reached the end of its road. In several places the tyre had completely disintegrated and I could almost push my finger through the tyre. I pushed the bike into Chicoana and found a bike shop, closed for siesta, but would perhaps be opened at 7pm according to a sign on the door. 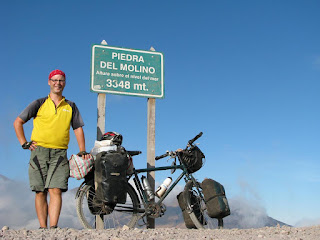 Posing in the clouds

Wednesday morning and with my new made-in-argentina tyre I nervously began the 64 kilometre climb up the Lerma valley. I was skeptical about the strength of the new tyre and almost 300 km, mostly of rough ripio or gravel road, lay between Chicoana and Cafayate. I knew I had a pass to climb over, but it had only been that morning as I was eating cereal from my billycan and pondering the tourist map that I realised the pass was 3,348 metres high, or almost 11,000 feet. As the morning wore on, however, the tyre seemed to be holding up and as various rental cars drove past, hooting their horns I settled into the climb and the rising temperature. Ten hours after setting off from Chicoana I watched the clouds close in over the pass and cover the serpentine switchbacks of the Cuesto del Obispo below. A strong tailwind and unanticipated tar soon had me gliding along at 40 kph and I was just 35 km short of Cachi by the time I camped up amidst the tall trunks of the cacti in Los Cardones national park. 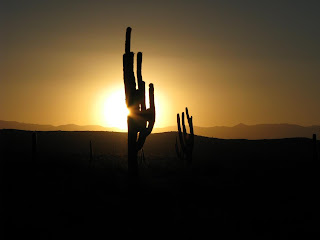 The next few days were spent slowly moving down the aweinspiring Calchaqui valley, through the villages of Cachi, Molinos, and Angastaco. The remote area has become a popular tourist destination and rental cars and tourist buses were almost the only traffic on the road, which was still very quiet. No doubt the younger inhabitants of the area have fled to the nearby cities in search of work. Ironically, when the Spanish arrived in South America, it was this region of Argentina that was the most developed, inhabited by the Diaguita, who had developed a sophisticated system of irrigation and the region of Buenos Aires was a veritable backwater. The Diaguita successfully resisted Spanish forces for over 130 years until the end of the seventeenth century when the 2000 survivors were forced to walk 1500 km to a reservation on the outskirts of Buenos Aires, many dying enroute. 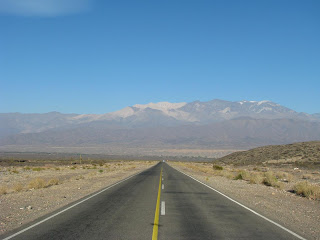 Snow caps above Payogasta
One evening as I set up camp in the municipal campsite at Seclantas, I was handed a sandwich of local goat's cheese and tomato by Juan. The cheese had come from an old lady who had traveled two hours by bus to Cachi, hoping to sell it to some tourists. Failing to do so she had given Juan's girlfiend the cheese as they sat and chatted on the bus that evening, Juan's four-month old baby girl gazing out the window. As we talked Juan told me of his previous travels, spending a number of years traveling through Africa and Asia. Writing a book about the former that no editor has yet accepted for publication. He had sold his house and taken to the road during the late 90s when the Menem government was privatising many of the state's enterprises and ultimately setting Argentina on course for defaulting on its US$180 billion debt and subsequent financial collapse in 2002. Juan was in New Zealand when he realised that withdrawals from bank accounts had been frozen by the government. Penniless, he then worked for several months on a fruit farm to save enough money for a ticket home. When the unpegged peso finally settled in at 3 pesos to the dollar, he was only refunded a third of the money he had saved, losing almost US$20,000 in the process. After another couple of years traveling through South America and Europe with his girlfriend, selling jewelry on the street, he yearned to settle down and has done so now in the province of Cordoba with his girlfriend and child. He never puts savings in the bank anymore and despite a complete lack of faith in the government, recognises that the experience has been a very positive force in his life, giving him a new perspective on material things, middle class stability and allowing him to take control of his own circumstances. I try not to imagine how many grapes I'd have to pick here to pay for a flight home. Pretty amazing journey from Pilar to Cafayate, between the heat, winds, bugs, climb, flats... Glad to hear your bike's fixed up and that you continue on in fine form. We're back home a week and a half now, falling into the grind of work and responsibilities. I envy you the rest of your trip. Suerte Julian!

Me gusta las vistas... I am now officially stick free. So pencil me in for 2010