10: Slowing down in the Anti Atlas

"People travel to faraway places to watch, in fascination, the kind of people they ignore at home" - Dagobert D. Runes
"May all your trails be crooked, winding, lonesome, dangerous, leading to the most amazing view, where something strange and more beautiful and more full of wonder than your deepest dreams waits for you" - Edward Abbey
"The journey is the destination." - Dan Eldon 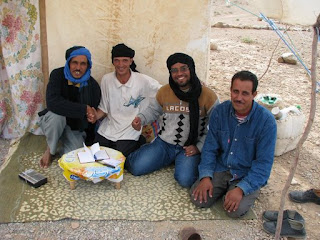 Plenty of time for accepting kind offers to sit and drink a tea lately...

There's a couple of thought provoking travel quotes to ponder on this wet and chilly Saturday evening in the Anti-Atlas mountains. While the pace of movement has slowed down to a virtual crawl over the past week, the bonus has been that there is plenty of time to accept invitations for tea, and to enjoy some time off Rocinante in the hills around Tafraoute. There's a lot to be said for the idea that the slower you travel the more you appreciate it. Rather than take a more direct route from Tata towards the main (only) road south through Western Sahara to Mauritania, I chose to employ one last diversionary tactic and make a last visit to the temperate climes of the Anti Atlas. Well as I sit typing, wrapped up in almost every item of clothing in my wardrobe, it's a bit more temperate than I would have wished for.

Leaving Tata I headed northeast to Igherm, stopping overnight enroute at the oasis village of Tagmoute. Invitations for tea have abounded of late and I reckon that if I were to accept each one I'd be hard put to make more than about five kilometers per day, but I had lots of conversations with people in the villages enroute. Many of the people I've met have spent significant parts of their working lives in Europe, usually in France, and have retired home to Morocco. For many of the migrants, while working abroad provided an income that would have been unattainable at home, it has also meant an often painful separation from their families for many years. Pondering on this hardship the other day, after a brief chat with a man who had spent 28 years working in France whilst his family remained in a village near Tagmoute, I approached the top of what had been the first serious climb in the past couple of weeks since crossing the Middle Atlas. A movement on the treeless hillside brought me back to the present and soon I had made a conscious connnection between the blur and the savage barking that I had subsequently begun to hear. I realised then that I was probably experiencing my third "Encounter With A Ferocious Dog" in Morocco. 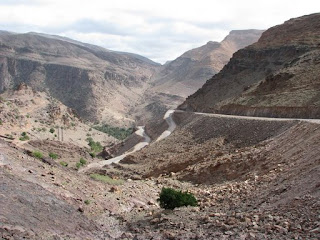 Moments before the battle...

When one is climbing an incline of more than 8% on a loaded touring bicycle, with the additional ballast of 4 litres of water - just to make sure the odds are truly stacked against you - the appearance of a rabid-looking, salivating hound who probably hasn't eaten since the last cyclist passed this way, certainly brings out a feeling of vulnerability. If this was a wildlife programme, I was like that aging buffalo that couldn't keep up with the rest of the herd when the lions broke from their hiding. It was merely a case of chasing down the prey. Only I didn't even have a herd. The last and only car on the road had passed by well over an hour previously. Cycling appeared only to provoke matters as Jaws decided which juicy-looking calf he'd sample first. I remembered the three options that I had been rehearsing for such occasions, all of which seemed truly pathetic in the face of this frothy-mouthed canine. The most humane approach, and therefore least effective, would be to spray water from my bottle in the dog's eyes when he came close enough. The second was to wield my pump at the dog and give him a wallop if he tried to move in for the kill. The final option was to pretend I was taking a penalty kick for Ireland that would bring us to South Africa in 2010, with the dog's head being the ball.

I settled on trying the middle option first. As I was unhooking my pump from the bike frame, as if it were a double-barrel shotgun, I realised that what I had presumed to be the echo of the dog's barking was actually a fellow bloodthirsty hound who had come over the mountain to see what all the fuss was about. Delighted at the prospect of sharing the corpse of a tender and succulent cyclist, the slightly healtier looking new arrival performed a flanking manoeuver. Wielding my pump as if it were a lightsaber from Star Wars, I felt ridiculosly ill-equipped to fend off the beasts, and I began to estimate how long I could hold out for. Just as I was trying to assess the feasibility of taking two penalties for Ireland simultaneously, my guardian angel appeared over the brow of a hill. The woman, who was covered in a red shawl, hissed a couple of barely audible retorts to the dogs and within a couple of seconds they had assumed disinterested positions, overlooking their flock of goats, casually gazing over in my direction as an old man might sit and watch young children playing. I said hello and thanked the woman in my best Berber and she looked at me as she walked over to the dogs, but failed to acknowledge my greeting or gratitude. I waved and smiled gratefully, thinking that body language might be a more effective means of expressing my appreciation, but still no acknowledgement of a presence other than a look that seemed to suggest everything was my fault. Finally, fearing that the lady could well change her mind and release the hounds on me once again, I jumped back on the bike and headed all too slowly on up the hill. 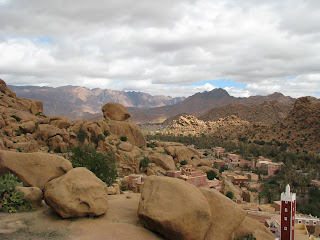