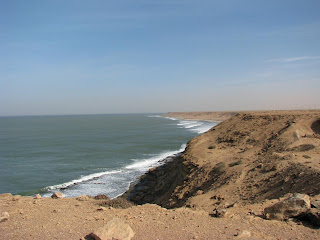 Where desert meets the ocean

It wasn't hard to recognise Daren and Tatjana and their loaded bikes in Tan Tan Plage, despite having only conversed over emails prior to that point. They had been camping out for the past few nights and were looking forward to getting some of the sand out of their clothes, albeit only temporarily. We retreated to the campsite for the evening and after they had washed up and scrubbed down we discussed the journey ahead. After getting supplies in town the next morning, we were back on the road south. 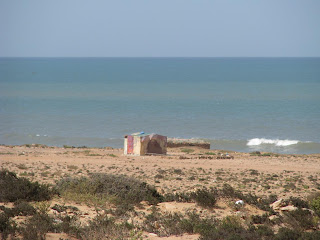 It's a good feeling having company again. Now, pedaling along, we can chat or just let distances emerge between us as we pedal southwards, pushed on by cooperative tailwinds. Daren and Tatjana are exceedingly modest when discussing their two-year, around the world bicycle trip that they have planned across Africa, South America, Australia, and Asia.
Our first 10 km riding together, however, had us all nervous about the 1600 km trek to the Mauritanian capital, Nouakchott. An exceedingly stiff cross wind from the interior had scooped up the fine sand and we were riding through a fog of sand, occasionally getting blasted off the road by both wind and passing trucks. This unhappy state of affairs retreated, however, and we were soon breezing along the escarpment above the Atlantic coast. Similarly our first night camping together, in small dunes just off the road, didn't bode well initially. With the sun having just set, our chosen site was apparently also the preferred home of mosquitoes and we were all gorged on before we could get the tents up and the fire going. Blood spatters from the swatted parasites now added to the other grime. Soon they retreated too, however, and the almost full moon magically lit up the surrounding dunes as we sat around the fire.
The following day we were back on the coast, passing the fishermen's huts perched atop the cliffs overlooking the Atlantic. We had debated about the need to venture 4 km off the road to Tarfaya for supplies, but the lack of a shop beforehand decided the issue for us.
Tarfaya appeared as a dusty, small town at the edge of the known world. We stopped at the first shop we came too and went in to get water, bread and various snacks for lunch. Twice I refused a young teenage boy's demand for a dirham. Leaving the shop, Daren paused to take a photo of the town's dusty and deserted street. I too reached for my camera, but instead I found a gaping hole in my camera bag. A rush of anxiety as I mentally retraced my last steps and I quickly realised, with a sickening feeling, that it must have been lifted out of the bag whilst we were in the shop. None of us could believe it. The town appeared so quiet, so calm and uninterested in us. My poor communication with the shop owner made the initial discussion sound more like an accusation than a query. Gradually more passersby became interested and then the tide turned. A young and frightened looking boy on a bike had spotted another boy dipping his hand into my handlebar bag. After some more moments I was assured that my camera would arrive momentarily. Nobody wanted to involve the police, which was fine by me too.
Approximately three quarters of an hour passed since we'd stopped at the shop and my camera was returned by the same boy who had been asking me for a dirham. He scarpered off before being lynched by the dismayed crowd that had now gathered. The event over, everyone dispersed and after thanking those who had helped recover my camera we rode out of Tarfaya. We didn't look back. With a happy ending, and yet another demonstration of the power of using local community networks to resolve issues such as these (this is not the first boomerang camera incident I've had, see a previous post about South Africa), it was also a timely lesson in not being too casual about leaving bikes and gear unattended. 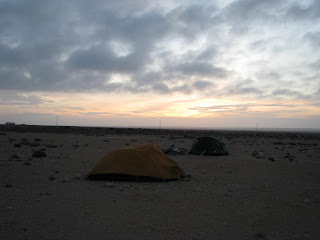 Sunrise over the tents, our first morning in Western Sahara

After another beautiful camping spot, overlooking the Tah depression, we rode the remaining 80 km into Laayoune yesterday morning. The capital of Moroccan-occupied Western Sahara, Laayoune is dominated by soliders, police, and white, UN labeled Landcrusiers - all testament to the unresolved conflict between the Moroccan government and the Sahrawi people, that has persisted for the past three decades. The sandy territory has been dubbed by some as 'Africa's last colony'. For southbound cyclists, Laayoune also represents a chance to stock up on essentials before continuing on. 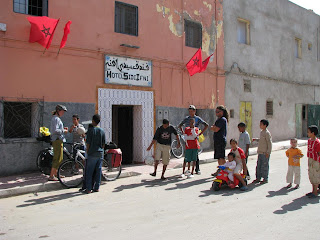 Want to find out more about Western Sahara? Here's some good bedtime reading...

For a general introduction see the wikipedia article.

The International Crisis Group have a couple of very readable reports published in mid 2007 that examine the development of the conflict and also try to identify potential solutions to the current stalemate.

For something from a Moroccan perspective try...
http://www.westernsaharaonline.net/ or http://polisario-confidential.org/
Posted by Julian Bloomer at 12:36

My mum only just told me about your amazing trip, so I thought I'd stop by and see where you'd got to.

Well done! Give it socks! I'm envious... Not surprisingly, given I'm sitting at a desk in central London.

Anyway, interested to read you passed through Western Sahara too. A photographer I know in London has done lots of work out there:

Perhaps one to add to your list of links

Anyway, best wishes & keep it up