As I rode out of Tafraoute after a six day sojourn, there was a sprinkling of snow on the mountain tops of the Anti Atlas. It was definitely time to continue the migration south and escape the tentacles of the northern hemisphere's winter months. As I dropped southwards out of the mountains, I passed through one village where a little boy made the customary plea for a pencil. Muttering "no" as I pedaled on, I thought I heard him say something else. Turning around to look at the kid, with his school bag on his back, he was holding out his half eaten bread roll towards me and saying, "Tiens", or "take", with a big, innocent smile on his face. I wanted to give him every pencil and pen I had on me. I wanted to run over and hug him for restoring my faith in small Moroccan children. Instead I stuttered out a "non, merci". Shouting a thank you in Arabic for good measure, and waving unsteadily, I pedaled on elated.
The temperature climbed steadily as I emerged from the mountains and joined the N1 south at Bouizakarne. The strip of asphalt runs all the way through to Nouakchott, capital of Mauritania, and represents one of a limited number of possibilities for crossing on a sealed road from North Africa into sub Saharan Africa. As the principal road south into Moroccan-occupied Western Sahara, the road is predictably heavy with goods and passengers being brought north and south. With only enough room for two trucks to pass each other, I had to settle for riding on the dirt shoulder at times. This unpleasant state of affairs was initially compensated by the friendly waves and hoots of the passing truck drivers, although fatigue had set in and this unwanted attention became somewhat tiresome, merely adding further cacophony to the dust and diesel fumes.
Guelmim. I'm sitting outside a cafe, drinking tea, when a camel runs straight through the red light of the town's main intersection and on down the road. Described by my photocopied guidebook as a 'small, dusty town with little to offer the passerby', it feels like Las Vegas to me after the journey through Morocco's southern interior. Pizza, smoothie-type drinks made from avocado - fantastic, and a supermarket stocking peanut butter, and, wait for it - porridge oats! Although despite my apparent enthusiasm for the latter I indulge less and less these days.
I spotted Olly and deduced that he was the owner of the GB-registered motorbike parked in the lobby of the hotel. Hailing from Bristol, Olly was also enroute to West Africa and over a late night tea and an early morning breakfast we swap stories and information about the road behind and the road ahead, his a slightly more condensed and speedier version than mine. I receive word that my two potential riding partners for the journey south will be a few days in arriving. As I watch Olly loading his bike, I spot two cyclists replete with touring panniers, pull up at the end of the street. I say hello and ask them where they are heading? The young Swiss couple tell me they are headed to the ruins of the nearby old French military fort, Fort Bou Jerif. A scene reminiscent of Stanley's encounter with Dr. Livingstone follows. Overhearing that I'm Irish, they ask if my name is Julian Bloomer. It transpires that they had met Jean and Patrick in Marrakech (two French travelers I had met a couple of weeks back in Merzouga) and the guys had told them about meeting me. It's a small world. The other day I received a reply to an email I had sent to Daniel Harmen, an English cyclist currently in Guinea, and he said he had met some people recently who told him that there was Irishman coming down from Morocco on his bike. It could be another Irishman, but then again. As I say, it's a remarkably small world, even if you're on a bicycle. 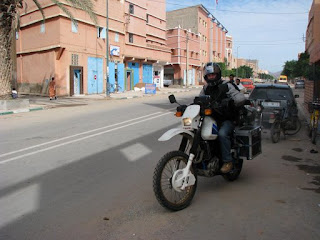 I make a pleasant day trip from Guelmim to the ruins of Fort Bou Jerif, on an unloaded and sprightly Rocinante. There's a campsite beside the fort, a popular stopover for those heading south apparently. I chat to a Dutch couple and a South African couple who are heading to the DRC and South Africa respectively in well-equipped overland vehicles. There is music, laptops and Bovril. It's all so tempting and looks like fun. I leave before I get overcome with emotion. Nick, an English motorcyclist, passes me by on the way back to Guelmim. He's heading back home after several weeks touring Europe and Morocco. He likes the idea of cycling. I like the idea of his motorbike. The grass is always greener on the other side. 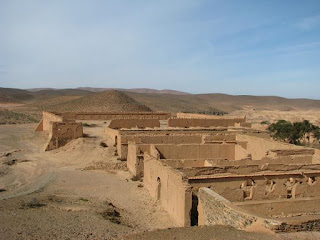 To anticipate the trucks I buy a rear view mirror from a bicycle shop in Guelmim. Its meant for a motorbike and is a lot larger than I would have wished for, but it will do the job. Perhaps I'll get an engine next. 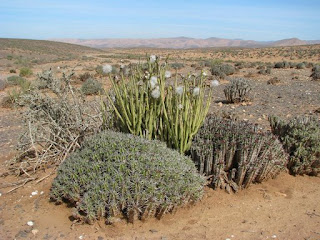 Life in the desert

On the road to Tan Tan. It seems less busy than the other day. I'm happy to wave to honking truckers today. The new mirror is fantastic. I can anticipate when I need to be close to the verge and when I can relax and move towards the centre of the road. Hard to believe how cold it was in Tafraoute a few days ago. It's hot again. I pull into one of the only settlements along the route just after midday. I have my own sandwiches so I just take a coke, happy to be out of the sun for a bit. Oil and coke seem to be the main products heading south. Two bloodied goats heads eyeball me from a nearby table. Presumably they are to demonstrate the freshnesh of the carcass on offer to customers. The flies are horrendous. Everywhere. I have to keep the lid on the bottle and take quick gulps whilst avoiding drinking a fly too. The only other customers, a group of truckers, tuck into their goat tagine, encouraging me to join them. I decline politely, and head back outside where it's about Gas mark 5. 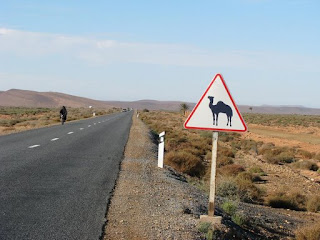 Twenty kilometers before Tan Tan I'm waved through a police checkpoint. Five dogs follow me in hot pursuit but soon give up the chase. They seem to have much less resolve than their mountain cousins. Outside Tan Tan I pass the first police checkpoint where all the details from my passport are noted. This becomes increasingly common the closer one gets to Western Sahara. The officer in charge of the biro looks at my bicycle, and then at me. "You are on a bicycle?", he says, studying the column for 'type of vehicle' in his ledger. I nod and smile to affirm that I am indeed sitting on a bicycle. We exchange jokes, with neither of us understanding the other, and then he waves me on into town.

Tan Tan isn't Guelmim, but it's not a bad spot. A collonaded main street bears testimony to the town's history as part of Spanish-Morocco. There's a hustle and bustle along the street. I'm in a €5 per night establishment, with a balcony overlooking the main bus park. Tomorrow morning should be a treat. Still, the owner is friendly and the shower is hot. I change into civvies and go to find food, water, and the internet while the muezzin calls the devout to prayer.